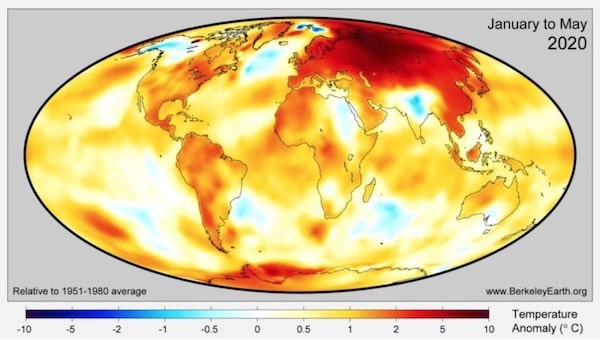 In May it was hotter on the coast of the Arctic Circle than in the Mediterranean. Russia is heating up three times faster than the rest of the world.

Russia’s weather has gone crazy. There is currently a heatwave inside the Arctic Circle where the coast is hotter than Mediterranean beaches. And Moscow has just reported its warmest days in May ever, where temperatures soared to over 30% while the rest of Europe was suffering from a cold snap that has seen gas prices used for heating double this “spring.”

The situation follows on from the end of last year, when there was no snow until December. (It usually starts some time towards the end of September.) In short: nothing is normal.

Russian President Vladimir Putin has been accused of ignoring the climate change issue and going slow on implementing Russia’s Paris Accord commitments, which the Russian government ratified in 2019.

However, after a string of environmental disasters last year, including the triggering of a federal emergency after mining giant Norilsk Nickel spilled over 20,000 tonnes of oil into Arctic rivers, and a once-in-a-1,000-year snow melt flooded the TGK1 power station near Murmansk, the Kremlin seems to have woken up to the fact that Russia’s permafrost is melting. As if to underline the point, there was a another large-scale oil spill this month by Russian company Lukoil. 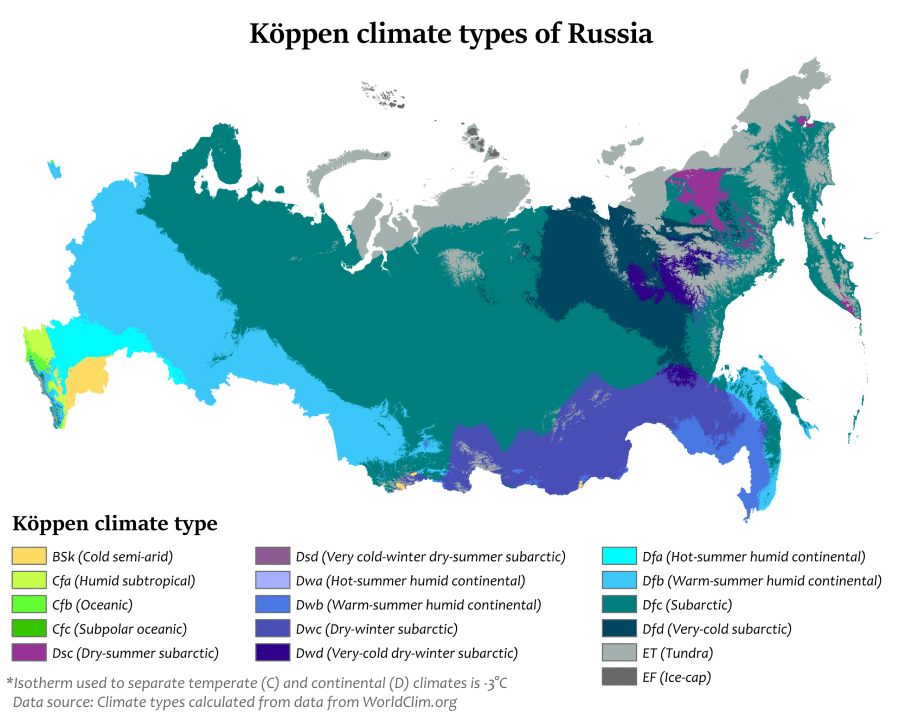 This is not the first time that Russia has had a heatwave. Last summer was the hottest since record-keeping began, as towns that are usually still blanketed by snow experienced blazing heat, thanks to the escalating climate crisis.

On June 20 last year, the Weather and Climate weather portal recorded a temperature of 38C in Verkhoyansk in the Sakha Republic in the centre of Russia, the coldest town in the world with a record all-time low temperature of -67.8C.

Verkhoyansk also holds the Guinness World Record for the highest recorded temperature range of 105C, with a fluctuation from minus 68C to a high of 37C, according to the Moscow Times.

The alarming result was part of a report published on May 19 by the Arctic Monitoring and Assessment Program (AMAP), which also warned of an increased risk of the region’s iconic sea ice disappearing completely in summer, before reforming in winter. 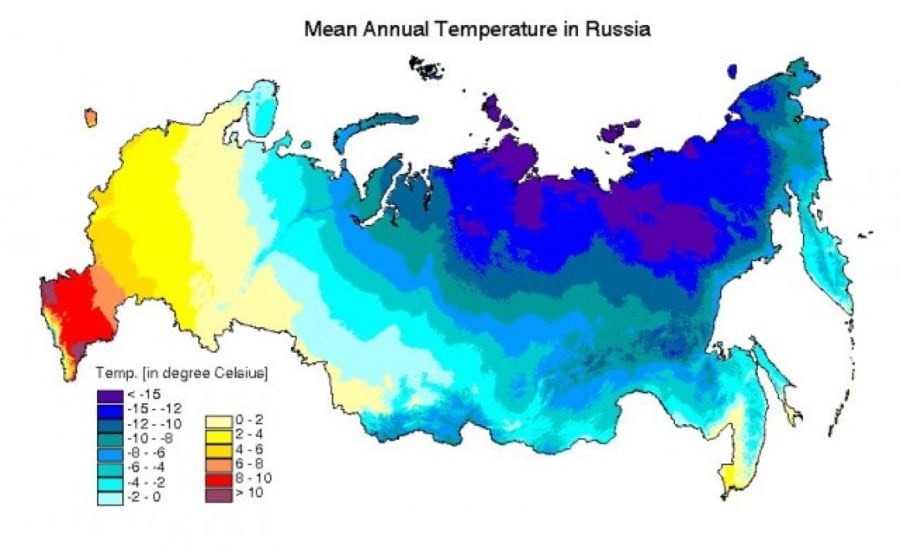 And Russia’s melting permafrost is a ticking CO2 emissions time bomb. Currently the ground temperature is about -3C on average but this has been rising by about one degree per decade. Frozen into the vast wastes in Russia’s interior are giga-tonnes of rotting prehistoric vegetation. If the ground temperature reaches zero then there could be a one-off massive release of CO2 into the atmosphere as gas trapped in the permafrost is released with unpredictable consequences. A process that was thought to take three decades looks like it is going to reach a climax much sooner than expected.

Going to be a long hot summer

Temperatures across the Arctic region are now 20-24 degrees higher than is normal. Temperatures in the Arctic Circle village of Nizhnaya Pesha hit 30 degrees Celsius (86.5 degrees Fahrenheit) in mid-May, a measurement Scottish meteorologist Scott Duncan called “truly exceptional for any time of the year but mind-boggling for May,” as cited by Tass.

According to state meteorological service Roshydromet, the heat anomaly originates from south-western Siberia and has spread throughout most of central Russia.

In settlements near the Arctic Circle like Naryan-Mar, Arkhangelsk and Salekhard, the temperature has been hovering around 25-30C for several days, the Barents Observer reported. And from Siberia to Alaska, forest fires have also become a problem.

Weather anomalies have been recorded further south as well. St. Petersburg recording its hottest May 12 (26.7C) in 58 years just days after it saw snowfall, while Moscow and several other Russian cities broke all-time heat records on May 20.

Extreme weather events in Russia have doubled in frequency in the last 20-25 years, Roshydromet head Roman Vilfand said in an interview with the Ura.ru news website last year. UN scientists, who have observed a similar trend worldwide since 2000, concluded that climate change is the likely cause.

The Arctic heat wave comes just as foreign ministers gather in Reykjavik, Iceland, for a meeting of the Arctic Council. Russia takes over this year to head the council for two years. However, the meeting was overshadowed by the meeting between Russian Foreign Minister Sergei Lavrov and his US counterpart, Secretary of State Antony Blinken, on May 20 as Washington and Moscow attempt to thrash out the terms of a new relationship.

Russia has thrown a lot of effort into developing the Arctic region as the retreating ice reveals vast amounts of new mineral wealth it can exploit. Currently the region is estimated to host over a third of Russia’s recoverable oil deposits and three quarters of its gas, not to mention the mineral deposits believed to be in the ground.

The Kremlin’s priorities as the council’s chair are socioeconomic development and protecting the Arctic against climate change as outlined in its Arctic Strategy 2035, published last year. However, the region is becoming increasingly politicised as rivals eye the riches in the ground.

“We are committed to advancing a peaceful Arctic region where co-operation prevails on climate, the environment, science and safety,” Blinken told his Arctic Council counterparts from Canada, Denmark, Finland, Iceland, Norway, Russia and Sweden.

“The Arctic as a region for strategic competition has seized the world’s attention” but “rule of law” must be ensured so that it remains “a region free of conflict where countries act responsibly,” he added.

The statements were thinly-veiled warnings to China, which, although only an observer on the council, has made no secret of its interest in the vast and rich territory.

Russia has steadily beefed up its military presence in the Arctic in recent years, re-opening and modernising several bases and airfields abandoned since the end of the Soviet era. The Arctic Council was set up 25 years ago to deal with issues like the environment and areas of international co-operation, and its mandate explicitly excludes military security.

Deserts in the south

Putin used to joke that rising temperatures were not a problem for Russians who would “not have to spend so much on fur coats,” but the Kremlin is laughing less hard these days.

The rising temperatures are already turning large swathes of what was arable land into deserts in Russia’s south. This has not impacted Russia’s agricultural output yet, but it did affect Ukraine’s last year. It had a poor harvest due to drought.

While the land along Russia’s border with China could become arable and vastly increase Russia’s agricultural output in the next two decades, it will also destroy the agriculture in Russia’s “black earth” regions, some of the most productive land in the world. 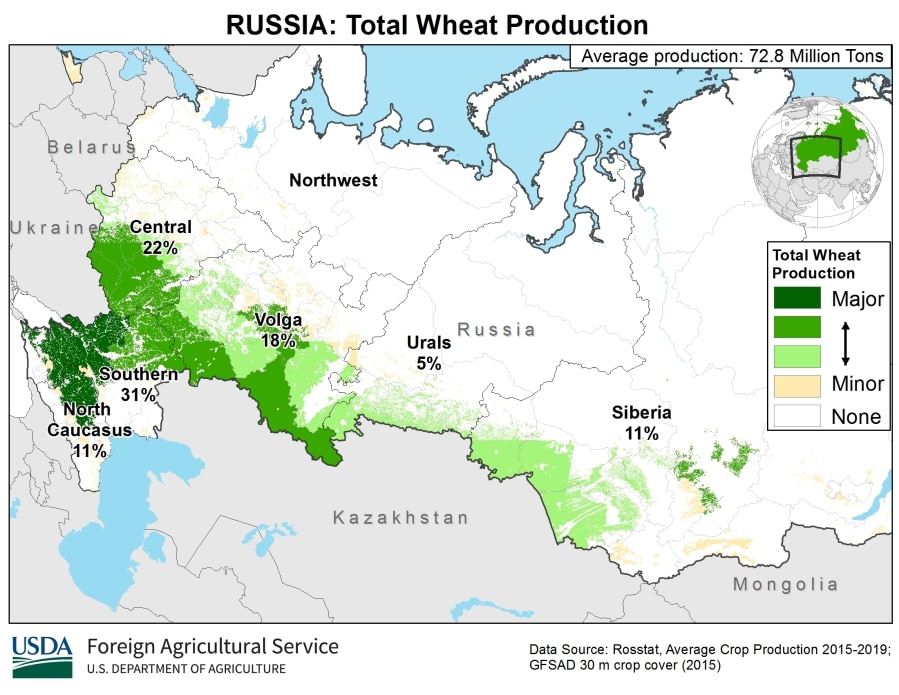 In the remote north of Russia’s Caucasian Dagestan region, rich grasslands once sustained hordes of humans and animals alike, but in the last three decades they have been turned into desert dunes by the changes in the climate.

The problem is not new. Academic papers were written on the problem over a decade ago identifying millions of square metres of land in southern Russia and stretching into Central Asia that were in danger of desertification thanks to the poor management of land and badly designed irrigation systems. These are the regions that most intensively produce Russia’s wheat crop, with only minor production along the long border with China.