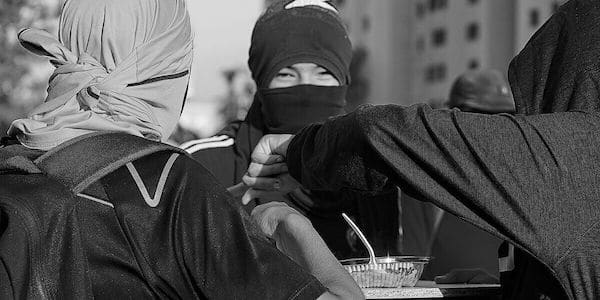 La olla común, literally ‘the communal cooking pot’, refers to a long tradition of grassroots community kitchens in Chile and other parts of Latin America that has been revived during the coronavirus pandemic. In an olla común, people come together to prepare large batches of food to distribute in the community. This usually takes place in low-income areas, although during the October 2019 social uprising, activists in Santiago also mobilized ollas for those on the frontlines of Plaza Dignidad, the centre of protests in the capital against inequality and neoliberalism.

In Chile, ollas have typically sprung up in response to periods of economic deprivation and crisis, but they can also be traced geographically to informal settlements known as campamentos and poblaciones in deprived urban areas. According to anthropologist Clarisa Hardy, by 1986, a third of Santiago’s inhabitants were ‘located in the most deprived urban areas: more than 1.2 million in poblaciones and campamentos, among them 135,000 families who are sofa surfing.’ For people living in these conditions, cooking collectively was both a practice of solidarity and a means for survival–alongside community orchards, collectivised bakeries and local unemployment funds.

At other times, ollas have taken on specific connotations of political resistance because of their location. In the 1970s, two Maryknoll sisters initiated an olla común with local women in the northern part of Talca. This particular region was targeted by the dictatorship because of its history of land rights struggles. Witnesses to the repression recorded by oral historian Hillary Hiner described soldiers conducting night raids where they forced locals to lie on the ground while soldiers walked over them. Feeding a community that was vilified by the Pinochet regime was an act of resistance by local women, one they expanded upon by establishing an early women’s refuge out of the same space: Casa Yela.

Food supply and distribution has been a key site of political struggle in Chile historically. It has been well-documented how elites in Chile who ran supply chains deliberately stockpiled food in the 1970s to create shortages, with the aim of turning popular opinion against democratically elected socialist president Salvador Allende. The plan backfired–many communities decided to collectivise food supplies instead to ensure their fair distribution.

On 18 October 2019, protests broke out in Santiago, heralding the start of the biggest social uprising since the return of democracy. For many, the motivations behind the movement were a direct response to the neoliberal model instituted under the dictatorship, and the possibilities that were foreclosed for Chilean people with the violent, premature end of the socialist government in 1973. In the early days of October 2019, graffiti stating ‘1973 es ahora’–‘1973 is now’–was scrawled on buildings throughout the city centre. This has translated into many resistance tactics from that period being deployed now, including the olla común.

According to LaOlladeChile.com, an online directory of solidarity cooking initiatives, there are currently 288 verified ollas comune s in Chile. This figure–likely an underestimate–is a reflection of the renewed responsiveness of community networks as a result of the uprising. Since October 2019, more than 200 autonomous local assemblies have formed across Chile. The fact that these local networks pre-existed the pandemic meant that communities were already aware of need within their areas and were able to respond rapidly, mobilising volunteers and donations within days of lockdown being announced in the capital.

In a country where almost 2.5 million people are informally employed, the pandemic has had a devastating impact on many livelihoods. Those who typically shoulder this burden are women, especially from immigrant backgrounds, who are most likely to be in low-paid, informal work–in Chile and globally.

These women are also more likely to have poorer health outcomes, exacerbated by a failing private healthcare system that charges women more for insurance and places restrictions on reproductive rights (abortion is still banned in Chile apart from in the case of rape, foetus abnormality, or if the pregnancy endangers the woman’s life).

According to Anita Peña Saavedra, CEO of Miles Chile, a sexual and reproductive health charity based in Santiago: ‘One in three people [in Chile] has not had access to contraceptives during the pandemic. It is vital to create mechanisms whereby people can access sexual and reproductive health services without fear of contracting the virus or being discriminated against on the basis of gender or immigration status.’

The restrictions on access to health and social services as a result of the pandemic have led the LGBTQ community in Santiago to set up a grassroots initiative called Lelapp (‘lela’ is a slang word for lesbian in Chilean dialect). Lelapp is a community fund that covers the costs of food, medicine, psychological support and legal aid for lesbians and trans people in Chile. It works through a system of donations; people can give a one-off sum or sponsor the development of the app over the course of three months.

Alongside the ollas comunes, solidarity initiatives such as Lelapp are proving crucial for the survival of many of Chile’s most marginalised communities. They are also moving from the conversations around democracy and community of previous years to tangible action on the ground.

During the October 2019 uprising, a popular refrain emerged that speaks to the power of mutual aid as a revolutionary tactic under neoliberalism: ‘El pueblo ayuda el pueblo’ (‘The people will help the people’). It has materialised in the years since through neighbourhood assemblies, with democractic processes being established on a local level to address communities’ needs, from providing food to organising for secure housing.

In the current pandemic, this has been vital. Care has emerged as central to realising the goals of the protests of 2019, as over the course of COVID-19, the often undervalued and invisibilised labour of women, queer and trans people has been increasingly recognised as providing a blueprint for a radical future. In this period of global crisis, the resurgence of the olla común tells us that the revolution starts a lot closer to home than we think.

Jumanah Younis is a freelance writer and books editor at Lawrence & Wishart.