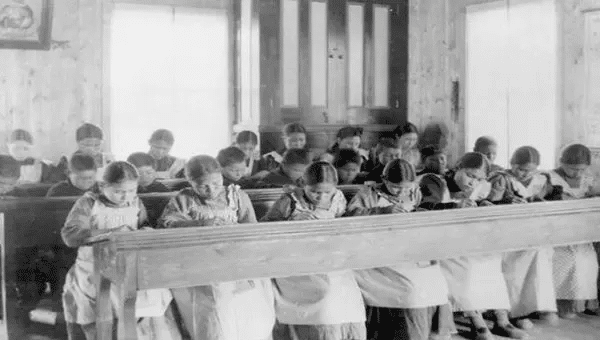 Indigenous kids in a residential school in Canada during the XX century. | Photo: Twitter/ @AmmarKazmi_

An indigenous community in British Columbia says it has found evidence of what happened to some of its missing children: a mass grave containing the remains of 215 children on the grounds of a former residential school, operated by the Church.

Chief Rosanne Casimir of the Tk’emlups te Secwepemc First Nation said on Friday that ground-penetrating radar had discovered the remains near the site of the Kamloops Indian Residential School, which operated from 1890 until the late 1970s.

“It’s a harsh reality and it’s our truth, it’s our history,” Chief Casimir said at a news conference.

And it’s something that we’ve always had to fight to prove. To me, it’s always been a horrible, horrible history.

Indigenous leaders said the discovery underscores the fact there are likely many more unmarked burial sites stemming from residential schools across the country that have yet to be found — & urged government officials to provide the resources to find them. https://t.co/MrLmHUQ1HK

The remains, which Chief Casimir described as “many, many years old—decades,” included those of children as young as 3.
Starting in the 19th century, Canada was home to a system of residential schools, mostly operated by churches, that Indigenous children were forced to attend. The system went into decline during the 1970s, with the last school closing in 1996.

At least at 4,100 students died while attending the schools, a National Comissión of Truth and Reconciliation report.

While there have long been rumors of unmarked graves at schools, if the findings in a preliminary report presented to the Tk’emlups te Secwepemc First Nation this week are confirmed, it will be the first time a major burial site has been discovered.

#215children all residential schools have to be searched, all have graves. This was genocide. Intentional, and covered up. There are those still alive who did this. We need justice. Not just in Canada, but the US as well. There is no reconciliation with genocide https://t.co/nO530Ou04A