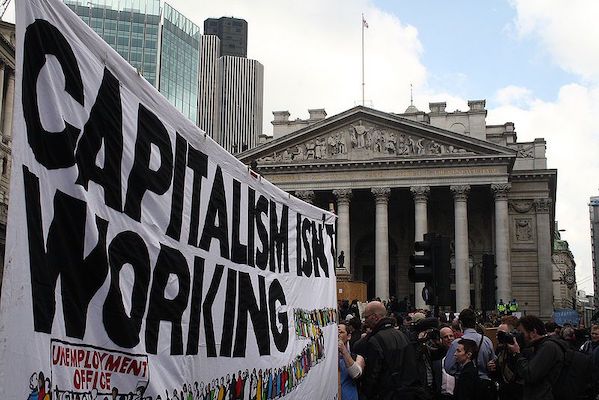 You see, if you shoot pool with some employee here, you can come and borrow money. What does that get us? A discontented, lazy rabble instead of a thrifty working class.

—Henry Potter, banker commenting on the people who reside in Bedford Falls and were helped by the Building & Loan company instead of crawling to Potter and his predatory bank lending policies.

This was excerpted from the holiday classic film “It’s a Wonderful Life.” It is one of the few times when the term “working class” was used in a widely seen cultural medium.

In the United States, the denotation is not worn proudly, but rather as having a slight tinge of being beneath the other more affluent and educated classes above it.

President Biden asserted in his speech to Congress on April 28:

Moreover, it was only attained after unions were established by working-class people in epic conflicts with the United States’ controlling class.

Regardless, it shows how reluctant politicians are to identify the vast majority of employees in the United States as “working class.”

However, they remain the economic class that built the nation’s now failing economy.

Scholars and academics analyze, define, and redefine social classes. There are truckloads of literature that identify the historical development of social, political, and economic groups by income and wealth.

C. Wright. Mills was an acclaimed social conflict theorist. Mills argued in his classic 1956 book, “The Power Elite” that a small group of individuals within the political, military, and corporate realms actually held the majority of power within the United States.

Mills asserted that a small group of largely males dominated the social, political and economic structure of America. However, he rejected the identifier “ruling class.” His description of the demographic that dominated American life was the “power elite.”

G. William Domhoff, prominent sociologist presented the case that there was a “power elite” in his 1967 book “Who Rules America.”

Oliver C. Cox, esteemed black sociologist, however, did not avoid the distinct economic class dominance in American society in his exhaustive study in 1948, “Caste, Class and Race.” Professor Cox emphasized that “economic class” was the basis in determining social classes.

Unquestionably, there exists a comparatively small economic class in the United States that controls the political, social, environmental, and foreign policies of the country.

Their policy views often do not comport with the views of working people on issues that affect the vast majority of Americans and why would they?

Maintaining their economic status drives every important policy issue in the country.

The controlling class—aka the “One Percent, the “Ruling Class,” the “Power Elite,” the “Ruling Elite” and the “Upper Class”—owns most of the income and wealth in our economic model, but that’s the cursory view.

What matters is their power.

This class is comprised of owners and boards of directors. They exist at the municipal, state, federal and international levels.

The “working middle class” is below the controlling class. In the media and literature this demographic is identified as the “middle class.”

This class identification resonates with most Americans.

“Middle class” is often used to promote the existing economic model in the United States implying that everyone existing in the expansive “middle class” is economically comfortable or should be.

However, it is clearly an artificial metric that merely serves to give a measure of false security to working people against the perceived judgements of others. It is promoted by the controlling class to keep working people divided.

The polls also reflect Americans’ preoccupation with it.

For example, in a 2015 poll by the Pew Research Center, people were asked to self-identify their economic class.

T.G. Bottomore, a leading authority on classes wrote about the “middle class” in his 1966 work “Classes in Modern Society.” He asserted that the prevailing economic model served to create the “middle class.” Bottomore saw it as a social construct that emphasized status rather than economic position.

He identified the “middle class” as professionals, small business owners and managers, and supervisors. They share many of the same conditions as working-class people do such as the instability of the market, government overreach, comprehensive healthcare and retirement security.

The tiny number of celebrities in entertainment and sports industries must be mentioned. They are often compensated with lucrative contracts. They can live lifestyles that most people only dream about if that’s a dream in the first place.

However, they are still employees, no matter how bloated their bank accounts or portfolios. Unless they become owners of entities that employ others, they are merely high paid workers dependent on the controlling class of billionaire owners and boards of directors.

To be sure, some of these individuals must be complimented for using their celebrity platforms to advocate for issues affecting working people. However, their numbers are insignificant to the demographic and they remain as outliers to the rest of the working middle class.

Economists can also muddy up basic, clear definitions of class.

Guy Standing, prominent British economist came up with a novelty in his 2011 book The Precariat: The New Dangerous Class. Standing asserted the an international social class now exists who are in a constant state of precarity without predictability or stability in the workforce. He combined the words “proletariat” and “precarious” to arrive with the identifier “precariot.”

With considerable respect to Professor Standing’s impressive work, this identifier is gratuitous. The working people described here are still a demographic in the working class. There is no reason to single out these people with a fanciful portmanteau that brings little insight on the composition of the working class. This applies to the “gig” economy as well.

It is consistent with America’s narrative that about 62 percent of employees in the workforce are working class.

Also included are the significant numbers of service industry and healthcare employees.

These employees have little control over the content or conditions of their workplace unless they are fortunate enough to be unionized. However, without a robust resurgence of the labor movement, the number of union members today will remain pitifully small.

Power, Not Income or Wealth

The ultimate definition of economic class rests with the identification of power in the economy.

Those with economic power must be identified and how our society strives for democratic ideals.

Martin Gilens and Benjamin I. Page, respected economists, wrote a paper in April 2014. They reported that policymaking in the United States is dominated by powerful business organizations.

They concluded that “America’s claim to a democratic society is seriously threatened.”

This was not a cataclysmic revelation to those who track corporate “crime, fraud and abuse” as Ralph Nader aptly described it.

However, their conclusion was disturbing and prescient in light of recent events as elements of the country veer toward fascism manipulated by oligarchs of the controlling class.

No political movement, however motivated by righteously moral intentions can advance without a blueprint that accurately identifies the demographics involved.

From spiritual progressives relying on faith-based initiatives to secular progressive organizations the participants must be identified accurately by their economic power or lack of it.

A simplified definition of economic classes will allow a better understanding of political machinations that work against economic democracy.

It will also facilitate a plan to address the continuing issues of racism and sexism in our society.

Economic class is the basis of both.

Although the mainstream media painstakingly avoids that view, the F.D.M. crowd (Facts Don’t Matter) will eventually figure it out at some level.

Consider that the frustration and venom of Mr. Trump’s base would evaporate if they had opportunities for decent, sustainable jobs with healthcare, education, housing, nutrition and a clean environment.

Instead of the relentless and witless indoctrination from the controlling class through its coopted and corporate supported media they might redirect that discontent to the source.

The working middle class and working class are natural allies.

They exist largely in the same power associations controlled by the controlling class. Their numbers approximate 99 percent of working people if defined by economic power.

Subscribing to a concept of democracy demands an acknowledgement of the continuing plague visited on a significant majority of Americans. These people deserve better from an economic model.

George Bailey, said it best, again in “It’s a Wonderful Life” when addressing Henry Potter’s attempt to take over the Building and Loan company.

Do you know how long it takes for a working man to save five thousand dollars? Just remember Mr. Potter, that this rabble you’re talking about… They do most of the working and paying and living and dying in this community.