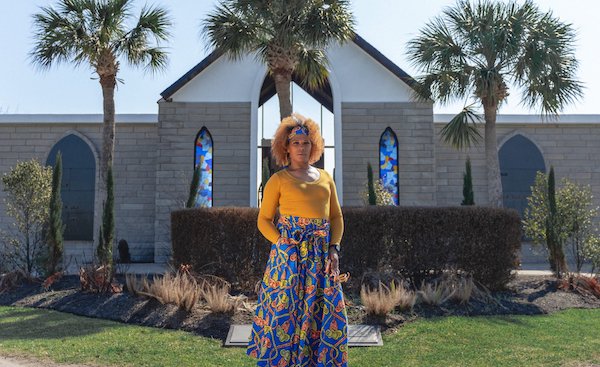 On an overcast day in late October, Dee Dee Watters stood on the stage at the University of Houston’s Cullen Performance Hall. She had forgone the traditional black of mourning for a purple flowered dress and large gold hoop earrings. She clasped her hands, adorned with her signature long, painted nails, around a black pillow as she peered out at the masked crowd spread throughout the auditorium. To commemorate the death of fellow Black transgender activist Monica Roberts, Watters, who organized the memorial, performed an original spoken-word piece that Roberts had held dear, told from the perspective of a Black mother recalling her trans child’s baptism and murder, wishing she could hold her daughter one last time. “You can tell your child that you love them. You can tell yourself that you love yourself. You can tell God that, ‘I thank you for blessing me with something that was ohhh so different,’” said Watters. She closed:

Just 16 days earlier, it was Watters, 35, who publicly shared the news that her friend Roberts, a prominent journalist and the founder of the blog TransGriot, had died suddenly at her home in Houston at age 58.

Even as she grieves, Watters is working to ensure that Roberts’ legacy lives on. Watters took over TransGriot as publisher in December and has been searching for a new editor. Roberts began writing as the trans griot, or storyteller, on New Year’s Day 2006, at a time when the media generally wasn’t covering trans communities except when there was violence against them. Reports of murders of trans people often misgendered victims by listing the name they were given at birth; part of Roberts’ work involved properly identifying them so their communities could grieve and justice could be served. Her death, due to natural causes, came in a record year for anti-trans violence nationwide. This year is set to outpace the last, with 12 transgender people reported murdered as of mid-March.

On January 30, the new TransGriot website went live with tributes from community members in Houston and across the country reflecting on Roberts’ legacy. Watters inaugurated the revamped website on Facebook Live. But more than six months after Roberts’ death, no one has yet stepped up to fill her shoes as editor.

There will never be another Monica Roberts. But I want to be sure we can affirm people doing this kind of work and leadership. How can we center her and embody her? 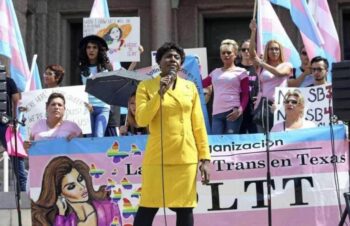 Monica Roberts speaks at a rally in protest of the so-called “bathroom bill” on the steps of the Capitol in Austin on August 4, 2017. COURTESY OF TRANSGRIOT

Watters describes Roberts as something of an archivist—the keeper of trans stories, history, and activism in Texas. Watters says she can’t remember how long ago she and Roberts first met. She’s not good with dates; that was Roberts’ thing. The griot-as-storyteller dates back to the West African Mande Empire of Mali, where the griot served as a preserver of history and traditions and acted as an adviser during community disputes. There are still griots in African countries to this day who serve their communities as storytellers and performers.

She could have called herself anything. But she actually chose to center herself in African terms and understandings of storytelling.

Whether she was denouncing “conservafools” or celebrating trans people running for office, Roberts held fast to her mission as “a proud unapologetic Black trans woman speaking truth to power and discussing the world around her.” The original Blogspot site is still up; the last post Roberts made, four days before her death, listed her favorites for that week’s NFL games—she picked the Texans over the Vikings.

She literally writes that when a griot dies, that the community says the library has been burned to the ground.

In the early 2010s, Watters had been thrust into advocacy work in Houston’s trans community, largely by necessity. Watters, who grew up in the city’s historically Black Kashmere Gardens, was unhoused and doing survival sex work at the time. She’d met other transgender people, largely Black people and other people of color, facing anti-trans violence on the streets and saw the need for action. She accompanied them to the hospital to ensure that doctors treated them with respect and used their correct pronouns and names. Sometimes she’d call their parents to tell them their child was hurt, then have to break the news to the patients that because of their parents’ transphobic attitudes, she was the only family that was coming.
“I didn’t do it because I felt like I was the leader or the big activist,” Watters says.

Then she met Roberts at an event in Houston’s Montrose neighborhood. “All she wanted to do was talk about history and shit and politics,” Watters says.

And I was like, ‘Girl, hell.’ Because I was a Black woman who had experienced homelessness, who, when it comes to politics—I didn’t feel that politicians did anything for me.

But soon Watters began to tap into her upbringing as a storyteller in her own right. She organized the first Black Transgender Day of Remembrance in Houston in 2013. Together, Watters and Roberts went to Houston’s City Hall and carpooled to the Capitol in Austin to advocate for trans rights. “Meeting her opened my eyes,” Watters says.

What does activism really look like? How can you be effective, and how can you really hit people where it hurts?

Roberts was among hundreds of Texans who filed into the Capitol early one morning in March 2017 to testify against Senate Bill 6, dubbed the “bathroom bill” because it required people to use the bathroom associated with the sex on their birth certificate. Roberts referred to it as the “transgender oppression bill.” Seated in the witness chair, she began her testimony by addressing state Senator Lois Kolkhorst, a Brenham Republican and the bill’s author, in her singularly resonant voice: “I share something similar to you: I am a fourth-generation Texan,” Roberts said.

But my ancestors came here in chains.

This is the first Texas legislative session in years that Roberts isn’t there to help fend off anti-trans legislation. A record number of states are proposing anti-trans legislation this year; this time, Texas is taking aim at trans children in particular. One proposed bill would require public school students to participate on sports teams based on the sex on their birth certificate. Another would prohibit health professionals from helping trans youth medically transition by classifying this kind of care as child abuse.

We are changing hearts and minds, and Monica is a big part of that.

A few years ago, Roberts and Watters began talking about what it would look like to hand over the reins of TransGriot to someone else. In a 2019 profile in the Daily Beast, Roberts said:

Our rights movement is like a relay race. The torch got handed to me at a certain point and when it’s time for me to pass it on, I’m just going to turn around and hand that torch back to the next generation for y’all to advance—and then hand it to the trans kids behind you. Our goal is to never let the flame go out.

But Watters says their discussions about a successor didn’t get very far. “It’s kind of a heavy conversation, especially for a trans person,” she says.

Because when we’re talking about it, we talk about our death.

In October, the Facebook page that was once home to Roberts’ posts about TransGriot as well as her talk show, TransGriot Weekly, livestreamed her funeral. Now, instead of one central voice documenting trans issues around the world, guest columnists send dispatches on Black trans life from Canada to Jamaica to Uganda. Watters sees this decentralized approach as key to ensuring the new site’s longevity, that the library remains standing. “Monica did so much, and it’s like, you know, damn I don’t really want to put that on one person,” she says.

Watters has carried on the tradition of Roberts’ “Shut Up Fool” award, which went to Senator Ted Cruz in February after he left Houston for Cancún during the polar vortex and ensuing blackouts. In early March, Watters brought back Roberts’ weekly talk show. And she’s taken up her work of ensuring that victims of anti-trans violence are able to find justice, even working with a detective to investigate the late-February death of a trans woman in North Carolina.

While searching for a new editor, Watters has been both coordinating and funding the website herself with money from her savings. Even before Roberts passed, TransGriot was largely self-funded. As the site grows, Watters hopes to sell ad space and find sponsors to sustain it. At the moment, she’s unemployed and moving between homes, using a GoFundMe to help find new housing.

It’s hard to be visible when you’re broke.

But she stresses that the most important part of her vision is passing the mic to the next generation. “We are no longer looking to stay and remain and be statistics,” Watters said in January, as the new site launched.

We make up a part of the demographics of this so-called America, and guess what? We’re gonna do this and do it big.

Irene Vázquez is the digital intern at the Texas Observer.