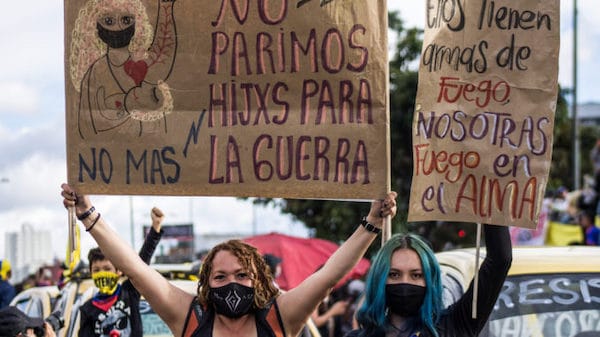 Two woman holding banners saying “We didn’t give birth children of war” and “They got firearms, we got fire in our soul”.

“Far too many women are fighting—not only for their rights, but for the rights of all,” says Yomali Torres, an Afro-Colombian activist. The 26-year-old joined throngs of women in the streets of Colombia over the past month to demand an end to patriarchal oppression at the hands of a U.S.-backed neoliberal state.

Women’s presence in Colombia’s national strike—both as activists and as victims—has caught the world’s attention. Many have spoken out against police violence and sexual abuse during the current demonstrations. This, however, is not a new issue. Police, armed forces and illegal groups have used women’s bodies as weapons of war for decades.

The strike, which marks its 1-month anniversary today, continues unabated. It started as a response to a tax reform project that would have devastated middle- and low-income households. Yet, this is not the core of social discontent among Colombians. This is clear as the strike continues, even after the president called on Congress to withdraw the tax reform bill.

At the end of 2019, Colombia saw mass mobilizations of diverse sectors of society, who expressed their discontent with the government of President Iván Duque. Among the criticisms were his ineffective economic, social, and environmental policies, the lack of implementation of a peace treaty with militant group Revolutionary Armed Forces of Colombia (FARC), and the numerous assassinations of social leaders, among others. According to Colombian state agency Investigation and Accusation Unity (Unidad de Investigación y Acusación), 904 leaders were assassinated between December 2016 and April 2021.

Historically, conflict and social inequalities have most affected women. Violence and sexual abuse are commonly wielded to gain control over the territories women and their communities inhabit, as well as their natural resources. The High Commissioner for Human Rights released a document in 2005 indicating 52 percent of displaced women reported having suffered some type of physical abuse and 36 percent had been forced by strangers to have sexual intercourse. 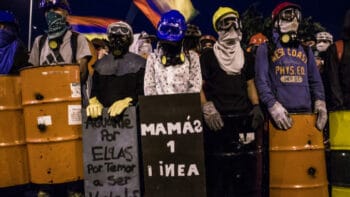 A group of protesters from the first line stand behind their homemade shields during the demonstration. Among them, the “First Line Mothers”. A group of mothers who stands together against police violence.

In a context of multiple violations of human rights—including extrajudicial killings, disappeared persons, torture, arbitrary detentions and use of firearms—gender violence continues to be deployed against the population during the national strike. Colombia’s Department of Protection of Citizen’s Rights has reported 106 cases of gender violence, of which 23 are acts of sexual violence.

With slogans such as “The revolution would be feminist, or it will not be,” “Not one less,” and “With me, whatever you want—but with her, nothing,” protesters have rejected violence against women, while drawing attention to gender inequalities.

One of the cases that has generated widespread indignation involved a 17-year-old girl from Popayan, who committed suicide after having been arrested by police. Before taking her own life, she wrote a statement accusing four members of the riot police of sexual assault. The girl had posted on Facebook police only released her after learning she was the daughter of a police officer.

Feminist Groups and their Demands

Women have taken to the streets, demanding equal access to education, healthcare and employment. They have assumed leading roles as human-rights observers, front-line defenders and community organizers. As a result, human rights groups—formed mostly by women—have suffered acts of intimidation and violence.

“We received death threats from the riot police. They told us they did not want us alive,” says Isabella Galvis of the Waman Iware Human Rights Collective.

At the moment, we do not have guarantees. They are using firearms during the protests, which is illegal under Colombian law. 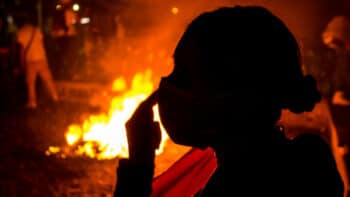 Silhouette of a woman in front of a fire on the street of Bogotá during the National Strike.

Feminist organizations move ahead despite the challenges, having organized multiple events. On May 10, a coalition of 173 feminist groups presented a list of proposals during the current crisis.

The Women Who Are Most Vulnerable to Inequalities and Violence

Afro-Colombians and Indigenous peoples have been affected—directly or indirectly—by racism during the protests. Calí, the city where police have exercised the most repression, has experienced the highest number of deaths during the strike. It also has the highest concentration of Afro-Colombian communities, according to the National Administrative Department of Statistics. 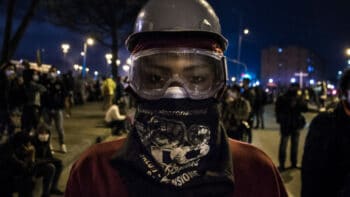 An Afro-Colombian woman standing on the first line during the demonstration.

The high level of inequality puts Calí at the center of these protests. Afro-Colombian people contend with uneven opportunities in the areas of education, healthcare and employment. That means the reforms the government has proposed would strongly affect Afro-Colombians, and women in particular.

“We are here commemorating Afro-Colombians today. We want to fight for our future and our rights,” explains Maria Niza Obregón, a 17-year-old Afro-Colombian girl, who supports the protests.

We want to live, not to survive.

A clear example of this was the fate of the government’s health reform, which sank after the first 20 days of protests. The regions with the highest concentration of Afro-Colombians and Indigenous peoples also have the poorest health systems in the country, according to a report by organization Así Vamos en Salud.

Yomali Torres, a 26-year-old member of Afro-Colombian human-rights and peace organization Cococauca, denounces the lack of hospitals and specialists in her territory on the Pacific Coast of Cauca.

“If someone has chest pain, the patient has to be transferred to Calí or Popayan,” Torres says.

If we do not die, it is thanks to ancestral medicine.

Afro-Colombian women have been particularly outspoken during the national strike, especially in Calí.

Torres condemns the violations of the rights of women, and of the Colombian population in general.

“In one way or another, we are taking advantage of the strike to demand justice for all of the women who have been raped, beaten and disappeared,” Torres says.

As a sign of indignation, the community of Guapi organized on May 7 an event called, “The Last Night.” With traditional cultural expressions, they commemorated those who have given their lives fighting for the rights of Afro-Colombians and the entire country. This celebration was carried out with artistic representations of graves and singing alabaos, or ancestral songs for the dead.

A month after the first call for a national strike, the different sectors of society are far from calling off the protests. This comes even as protesters’ blockades have generated a shortage of goods in certain communities. As Torres says,

We will not give up, because boats are not arriving with goods. Historically, we have felt hunger for more than 200 years. For us, this is not a real challenge.

Natalia Torres Garzon graduated with an M.Sc. in Globalization and Development from the School of Oriental and African Studies in London, United Kingdom. She is a freelance journalist who focuses on social and political issues in Latin America, especially in connection to Indigenous communities, women and the environment. With photographer Antonio Cascio, she founded the radio-photography program, Radio Rodando. Her work has been published in the section Planeta Futuro from El País, New Internationalist and Earth Island.