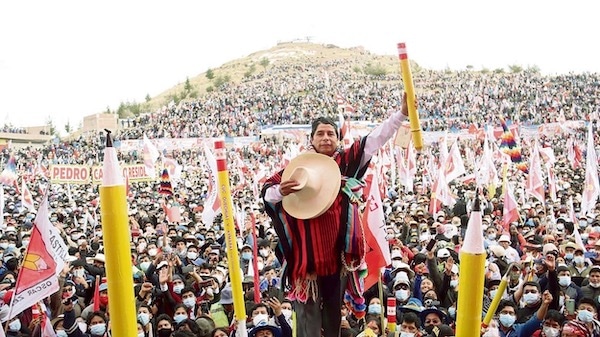 Pedro Castillo of the left-wing Free Peru party has won the second round of presidential elections held in Peru on June 6. However, his rival, Keiko Fujimori of the far-right Popular Force party has refused to recognize the results. On June 9, Fujimori, at a press conference in Lima, announced that her party will request the National Jury of Elections (JNE) to annul the results from 802 polling stations nationwide, approximately 200,000 votes, due to alleged irregularities in the electoral process.

In the face of the attack and in defense of democracy, thousands of supporters of Castillo gathered at the Plaza San Martín in Lima to peacefully demand that the ONPE offer the final results of the elections as soon as possible. A candle march was also held outside the headquarters of the JNE.

Castillo also called on his supporters to remain calm and wait for the final announcement. “Dear brothers and sisters, I thank those who continue to resist in the streets. Let’s not fall for provocations from those who want to see this country in chaos. Therefore, we make a call for peace and tranquility. Let us continue to be firm and happy in this final fight that belongs to all Peruvians,” wrote Castillo in a tweet.

According to the official vote count by the National Office of Electoral Processes (ONPE), with 99.998% of the ballots counted, Castillo has secured 50.204% of the votes, while Fujimori has obtained 49.796% of the votes.

Fujimori raised the allegations of irregularities and fraud in the run-off, after Castillo took a lead over her in the vote count. Initially, Fujimori had been leading in the vote count, however, when the counting in the country’s rural areas began, the difference between the two candidates began to narrow and Castillo pulled ahead.

Additionally, Fujimori had said that she had faith that the votes cast in foreign countries would lead her to victory, however, all the votes from abroad have been processed and Castillo maintains his lead over Fujimori with more than 71,000 votes. Only a few ballots from the Loreto department and Cusco city are left to be counted.

Last night, Castillo’s supporters surrounded the party’s headquarters to celebrate his historic victory. With fireworks and slogans of victory, thousands of people celebrated the victory of a leader who represents the working class. Today, on June 10, people from different parts of Peru will arrive in Lima to hold a massive mobilization to mark Castillo’s imminent victory.

Meanwhile, messages of congratulations for Castillo have also begun pouring in from across the world.

Former Bolivian President Evo Morales is among the first leaders to congratulate Castillo. “Pedro Castillo, soul brother and companion of struggle, you are the pride of the patriotic social and professional movements. Many congratulations on this victory, which is the victory of the Peruvian people, but also of the Latin American people who want to live with social justice!,” wrote Morales in a tweet.

Spanish deputy, Antón Gómez-Reino of the progressive Podemos party, also sent his wishes. “We congratulate, from the Congress, the victory of Pedro Castillo in Peru, the victory of a rural teacher, against the daughter of the dictator Fujimori, and the consolidation, despite the reactionary international forces, of the new wave of progressive governments in Latin America,” tweeted Gómez-Reino.

With Castillo’s victory, progressivism has returned to Peru, which has been ruled by successive conservative and right-wing governments for the last five decades. The only left-wing government in contemporary history of the country was that of President Juan Velasco Alvarado (1968-1975), who promulgated a significant agrarian reform law and nationalized several strategic sectors.

51-year-old Castillo, who is a primary school teacher, a union leader and a member of the urban and rural peasant patrols movement, has proposed the nationalization of natural resources and strategic industries such as mining, oil, hydropower, gas and communications to equitably divide the country’s wealth. He has also expressed himself in the favor of rewriting the country’s constitution, which was drafted during Alberto Fujimori’s dictatorship (1999-2000), with the aim of giving the state more control and a leading role in the economy to compete with the private companies. He proposes that the state should ensure basic rights to the citizens in order to address the crisis facing Peru, rooted in decades-long inequality.

Many progressive leaders from across the region believe that Castillo’s victory will strengthen regional integration and the anti-imperialist movement growing in the Latin American region.