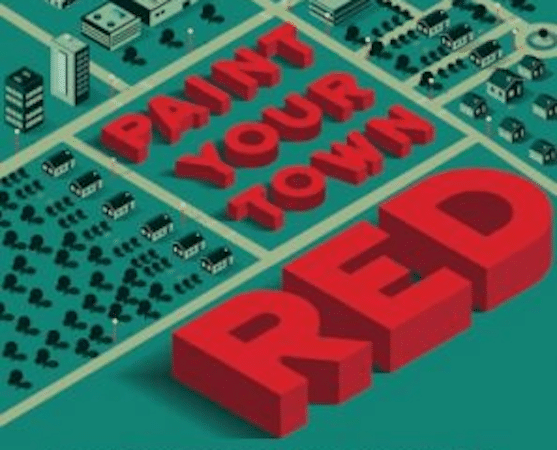 Paint Your Town Red: How Preston Took Back Control and Your Town Can Too 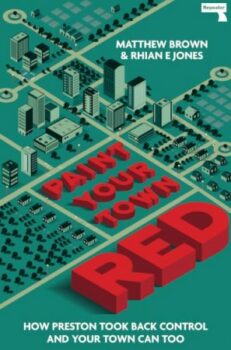 This is an excellent book to read alongside The Shadow of the Mine in the fallout from this year’s nationwide elections. While the latter’s historical view and sensitive narrative helps us understand Labour’s disastrous results in most of the North East–Newcastle excepted–Paint Your Town Red clearly maps new forms of democratic collectivism across the UK. We catch glimpses of an alternative strategy beyond inner party struggles and electoral tactics. In some places, notably Preston and parts of Wales, civic-based, politically-stimulated economic alternatives have already contributed to electoral success.

Whether these initiatives are in small towns and cities such as Preston, urban conurbations such as Tyneside, mixed rural and urban economies such as North Ayrshire or the razed ground of the coalfield and manufacturing industry in the Welsh valleys, they have in common political authorities that mobilise their limited powers to stimulate civic-led (community, trade union and co-operative) initiatives committed to environmentally sustainable and locally-controlled economic development. In the process, they collaborate with other, locally-anchored public institutions to create a virtuous circle of higher wages, increased local spending and new public institutions such as regional co-operative banking and municipal enterprises.

The book extensively discusses autonomous community initiatives such as community land trusts (CLTs), which in several areas have played an important role in social housing provision. Newham is an important example here. It is, in many ways, unusual as one of London’s most rapidly expanding boroughs and therefore able to access levels of funding not available to other boroughs. But it has sought to meet growing housing needs through CLTs. These share common principles of community involvement in key decisions about what, where and for whom land is used and how housing is provided. Usually, the community group will take a formal role in the ownership and stewardship of homes, with this role being legally protected for the long term.

These councils that share power with community organisations are not Labour authorities as we have known them – paternalistic, distant, suspicious of popular self-organisation and easily drawn into deals with corporate developers that marginalise local people and push social justice off the agenda. These innovative political authorities are still a small minority but in all their diversity they are growing.

One No, Many Yeses

‘One No, Many Yeses’ was the slogan invented by the alter-global movement of the turn of the century, united as it was against corporate-driven globalisation while simultaneously illustrating and creating an alternative world through myriad small initiatives.

The authors of Paint Your Town Red evoke this slogan to sum up the diversity of local alternatives to austerity, privatisation and corporate housing developments that they document across the UK. The slogan also sums up a growing trend among radical socialists to react to the defeat of 2019 by focusing their thwarted political energies on building power and creating illustrative alternatives at a local level, connecting up and preparing for (as well as contributing to) the possibility of a future breakthrough by the left in the different nations.

Some of these alternatives have historical inspiration and roots, like the many cases of community ownership of land, contemporary urban adaptions of the principles behind the Chartist land plan, which in the early 19th century proposed reforming land ownership to allot a smallholding, and hence enfranchisement, to all who signed up.

The starting point for this timely book is Preston, where one of the authors and now leader of Preston Council, Matthew Brown, responded to the post-2008 collapse of a corporate-led development project for the city–typical of the pre-financial crisis urban development projects commissioned by local councils at the time–by reconfiguring the council’s considerable public procurement budget towards local businesses and the encouragement of co-operatives.

Alongside a detailed description and critical assessment of the Preston experience is a case study of Skyline, the community-led project based in the Brecon Beacons in Wales. This enables communities to gain full ownership of their local land with the support of a grant from the Foundational Economy Challenge, set up by the devolved Welsh authority, and to use this land to create ‘green jobs’ in forestry and food production alongside community energy, including a local hydroelectricity project.

Although Preston gets a good write up (deservedly so), the authors are clear that what matters are the principles of local control and economic democracy, and an ecology of different forms of public ownership that Preston illustrates. They warn against treating it as a model to be replicated uncritically.

One of the many strengths of this book is the way it weaves the discussion of these alternatives with a nuanced and perceptive discussion of the complexity of factors motivating support for Brexit and the possible alternative ways of really taking control. It is an upbeat book and at times I was sceptical of its optimism, especially in the face of the tsunami of job losses threatened in industries hit by the pandemic.

On the other hand, it provides a detailed ‘how to’ guide, encouraging readers to grasp opportunities opened up by our present employment and environment crises. The optimism stems from its emphasis on what can be done now, based on what already works and could be workable in other places. The authors do not puff up their arguments as the only strategy. They are explicit about the way the ‘universalisable localism’ from its case studies depends in the long run on wider national and international strategies for redistribution of wealth and power.

My only unease is that despite its emphasis on community empowerment, the voices of the communities that led and benefited from initiatives otherwise so carefully documented are absent. But as a contribution to a continuing collaborative process of strategy building, this book gives us many tools and insights and, above all, an accessible guide to action. The authors will be well placed to write a follow up on the many ‘yeses’ that this book will assist.