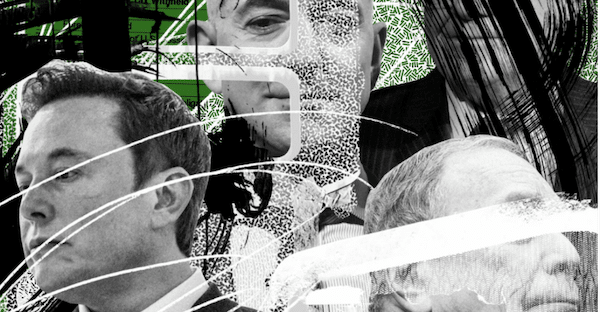 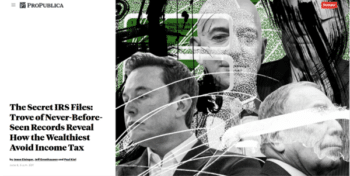 A ProPublica report (6/8/21) on the leaked federal tax documents of super-wealthy individuals has bolstered the economic left’s argument that the U.S. economy is set up in favor of the wealthiest. The report doesn’t show illegal activity; that’s what makes it so damning.

According to ProPublica, it “demolishes the cornerstone myth…that everyone pays their fair share and the richest Americans pay the most.” Examining the leaked taxes of billionaires like Jeff Bezos, Michael Bloomberg, Warren Buffett and Elon Musk, the investigation found that the

wealthiest can—perfectly legally—pay income taxes that are only a tiny fraction of the hundreds of millions, if not billions, their fortunes grow each year.

The source of the leaks is anonymous, and the nonprofit outlet (6/8/21) addressed questions about the ethics of publishing such a vast trove of personal information:

We are doing so—quite selectively and carefully—because we believe it serves the public interest in fundamental ways, allowing readers to see patterns that were until now hidden.

While alumni of the Occupy Wall Street movement and the Bernie Sanders presidential campaign embrace the disclosures as proof that the system is rigged for the rich against the 99 Percent, the political and media class are fuming at ProPublica and whomever leaked the information. 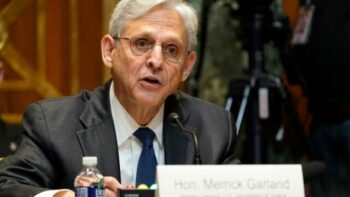 Attorney General Merrick Garland (CNBC, 6/9/21) compared the ProPublica story to “what President Nixon did in the Watergate period–the creation of enemies lists and the punishment of people through reviewing their tax returns.”

Top-ranking Democrats and Republicans have said they will seek justice, not for what the leaks exposed about wealth inequality, but by catching the leaker who supplied the information. CNBC (6/9/21) reported that Attorney General Merrick Garland told members of Congress that “investigating the source of a massive leak of taxpayer information behind an article by investigative news outlet ProPublica will be one of his top priorities.” Internal Revenue Service Commissioner Charles Rettig likewise “told lawmakers that internal and external investigators are working to determine whether the data ProPublica used was illegally obtained” (Forbes, 6/8/21).

Senate Minority Leader Mitch McConnell and Republican Sens. Chuck Grassley and Mike Crapo are demanding the Justice Department and the FBI investigate the disclosure of confidential tax information of some of the country’s wealthiest taxpayers.

The GOP leaders insisted that “those responsible be prosecuted and ‘punished to the furthest extent the law permits.’”

The Wall Street Journal editorial board (6/8/21) saw the leaks as a well-timed political hit, coming “amid the Biden administration’s effort to pass the largest tax increase as a share of the economy since 1968. Noting that the “main Democratic argument for a tax hike is that the rich should pay their ‘fair share,’” the Journal insisted,

The timing here is no coincidence, comrade. 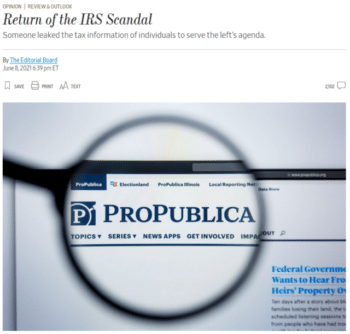 “The real scandal,” wrote the Wall Street Journal (6/8/21), “is that someone leaked confidential IRS information about individuals to serve a political agenda.”

Edward Luce of the Financial Times (6/10/21) also smelled a rat, advancing a “reasonable suspicion” that the IRS was hacked by an “entity that does not wish U.S. democracy well.” Whoever the leaker is, they “would know it would deepen public cynicism about America’s creed of playing fair and working hard.” Cynicism is already pretty deep when pundits think it more likely that revelations of systemic economic injustice are a foreign plot than a sincere attempt to provoke reform, or at least debate.

The attack on both the leak itself and ProPublica’s willingness to publish the information is chilling, especially when one considers the fate of leakers targeted by the United States government. Edward Snowden is still living in Russia because of his disclosure of National Security Agency surveillance to the Guardian. As Democracy Now! host Amy Goodman (6/14/21) recently said, the “U.S. State Department [is] still pushing to extradite WikiLeaks founder Julian Assange from Britain, where he’s been locked up for over two years.” The leaker or leakers will be very lucky if they avoid a a visit from federal agents, if not much worse.

But ProPublica should welcome the attacks from the highest levels of government, and from the business press, as a backhanded compliment. The idea that the outlet compromised the privacy of individuals is farcical. These people are the literal economic, cultural and political elite, whose accumulated wealth—greater in some cases than the GDPs of most countries—gives them enormous power and influence over the lives of the rest of us.

Bloomberg is a media baron who used his wealth to buy himself not just the New York City mayoralty, but an otherwise illegal third term (FAIR.org, 10/2/08)—and spent his way into being taken seriously as a Democratic presidential contender (FAIR.org, 2/14/20). Bezos, Amazon‘s founder and the world’s richest human, bought the leading newspaper in the nation’s capital, which coincidentally has developed a habit of defending its owner against charges that he’s too wealthy (Washington Post, 6/9/20; FAIR.org, 7/25/18, 10/3/17).

The outrage by Republicans toward the leak also exposes the party’s attempt to rebrand itself as populist and anti-corporate. Senators Josh Hawley, Ted Cruz and Marco Rubio like to paint U.S. corporate leaders as the financers of big, bad cultural liberalism (New York, 3/12/21). But the party’s rallying to the defense of the super rich shows where theire sympathies really lies.