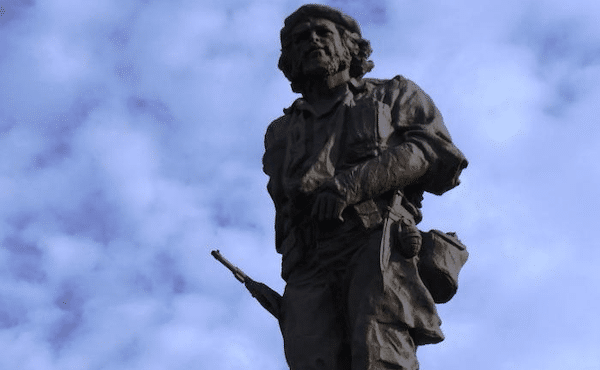 Popocatépetl is the second highest volcano in Mexico. It rises 5,426 meters above sea level (more than twice as high as Cuba’s Pico Turquino) and is located some 70 kilometers from Mexico City. Its name means “smoking hill” and is an active volcano that engenders significant concern within the scientific community and the population in general. It last erupted just a year ago. The ascent is a difficult challenge, along a steep snowy, trail.

A symbol of Mexican geography, Popocatepetl is a must-see destination for mountaineering enthusiasts. On October 12, 1955, an expedition led by Dr. Leon Bessudo joined the select group of human beings who have reached the summit of the volcano: one of its members was Ernesto Guevara.

He was not yet Che, but he was already suffering asthma attacks and had developed his penchant for challenges. For the young Guevara, the very existence of Popo (as Mexicans say) was a perennial invitation to make not only the rugged ascent, but to overcome his own physical limitations, as well. And, of course, he needed the training.

Ernesto Guevara had not yet become Che, but he had met Fidel and the Moncadistas. He had already enlisted in the mission that would become legendary: the Granma crossing and the liberation of Cuba. The Argentinean trained with his rifle, target shooting, and received lessons in military tactics, along with the July 26th Movement rebels, taught by the Spaniard Alberto Bayo. The multiethnic and plurinational group was preparing to wage an all-out war against the Batista dictatorship. Of course, he was aiming higher: although he was not yet Che, he was already imagining taking the struggle to all of Latin America.

“You are crazier than I am,” Fidel would tell him, laughing. Years later, in an interview with Ignacio Ramonet, the Comandante would remember those days of training and uncertainty and, in particular, the courageous Argentine who, when questioned by Mexican authorities about his political affiliation, replied directly:

Yes, I am a Communist.

In this interview Fidel also recalled Che’s obsession with Popocatepetl:

Every weekend he tried to climb… He would prepare his equipment… he would start the ascent. He made an enormous effort, but did not reach the top. His asthma undermined his attempts…. But he would try again, and he would have spent his entire life trying to climb Popocatepetl. He made a heroic effort, even if he never reached that summit… He didn’t care about the difficulty. He tried, and he was sure he would make it.

And he did. Despite the asthma, the snow and the altitude, Ernesto was able to contemplate the intense blue that crowns Popocatepetl. According to Dr. Bessudo, the young Guevara looked happy, full. It would be at other heights, with more heat and humidity, where the Argentine would become a legend; it would be in the Sierra Maestra where the story of the Heroic Guerrilla would be born. That young man was not yet Che, but the strength of the volcano he carried within was already evident.