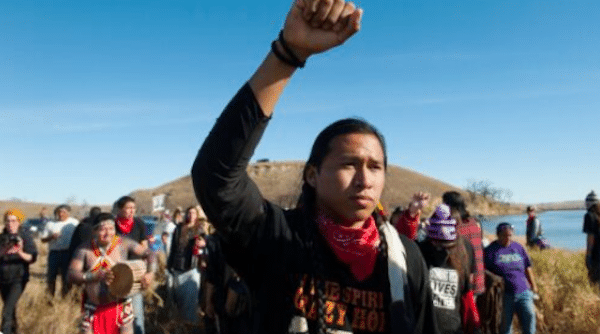 “Capitalism must die to protect the sacred”

Indigenous people have been fighting to survive for centuries. Recently, their struggles have become more militant, more global, and less isolated, aligning with other anti-racist and anti-colonial movements, and leading the environmental movement.

The growing challenge that Indigenous people pose to capitalist rule can be measured by the increasing use of military force to suppress their rebellions and by the targeted murders of Indigenous activists.

Imprisoning an adult in Canada costs about $10,000 per month, a minuscule sum compared with the profits that flow from exploiting Indigenous lands. Speaking for all capitalists, the President of Brazil remarked,

Where there is Indigenous land, there is wealth underneath it.

You have to quit crying on the shoulder of the man who stole your land.

The Red Dea l rejects “the politics of injury,” where “state and corporate perpetrators of violence and genocide position themselves as purveyors of ‘justice’ while entirely sidestepping the question of colonialism and imperialism.”

In Canada, the Truth and Reconciliation commission listened to millions of hours of Indigenous testimony documenting the abuses at the hands of residential schools and the inter-generational trauma that ensued. While the testimony was cathartic and documented actual instances of genocide, not a single scrap of Indigenous land was returned and colonialism didn’t end. (p.111)

Returning Indigenous lands or paying fair compensation would bankrupt the capitalist class. This is why they attack the ability of Indigenous peoples to defend their land, communities, treaty rights, and even their right to exist.

Prior to this era of so-called reconciliation, liberation was on the horizon of struggle. Today the horizon has become our further incorporation into the settler state and U.S. imperialism. (p.112)

Capitalist and Indigenous systems cannot be reconciled. Capitalists define sovereignty as private ownership or exclusive control, treating the Earth “as a resource to be exploited.” Indigenous people relate to the world as members of an extended family of human and non-human relatives who collaborate to sustain the web of life.

Our relations with the land and our non-human relatives…is the basis on which Indigenous people define their nations and sovereignty. (p.121)

Indigenous people seek peaceful co-existence. “Dish With One Spoon” covenants stress mutual responsibility to care for the land and its creatures and never take so much that the Dish empties. Capitalists covet the entire Dish in their hunger for more land, wealth, and power.

Capitalist practice is based on whatever advances profit-making. Indigenous practice is grounded in scientific knowledge acquired over thousands of years of observation and experimentation.

The COVID-19 pandemic has swept across the globe, sharpening two competing visions of humanity–one based on science and care-taking, and the other on pure make-believe. The most powerful nation in the world chose the latter. (p.2)

While capitalists can accept the physical existence of Indigenous people, they cannot tolerate an egalitarian way of life rooted in land, language, culture, and kin. That is why the State outlawed Indigenous cultural practices and why the goal of residential ‘schools’ was not to kill Indigenous children (although many were killed), but to erase their identity, to “kill the Indian inside the child.” That is why capitalists attack Indigenous people on all continents and why Indigenous survival, indeed human survival, depends on ending capitalist rule in all its forms.

Understanding this, The Red Deal rejects compromise with capitalism. ‘Free’ education for Indigenous youth is not really free when funded by destructive fossil fuel extraction. And conservation movements that strive to protect patches of biodiversity remain vulnerable to corporate exploitation.

The path forward is simple: it’s decolonization or extinction.

The Red Deal is organized in three Parts: 1. End the Occupation, 2. Heal Our Bodies, and 3. Heal Our Planet. Each part is subdivided into ‘Areas’ that explain what needs to be done and why.

These Areas are broad in scope and rich in detail, addressing virtually every critical issue facing humanity. They offer a useful introduction for readers new to the subject and consolidate a vast amount of material for the more informed reader.

While The Red Deal amply documents the damage caused by capitalism, the offered solutions are framed as a wish-list of what must be done. How to achieve these goals is unclear, with strategies ranging from the individual, “Anyone can promote food sovereignty in their local context by gardening” to “mutual aid networks” to mass actions, “We must swarm the state, inside and out, multiplying the threat by millions until it crumbles.”

These tactics are not prioritized, implying that all should be deployed to chip away at the system “until it crumbles.”

Capitalism will fall–we are certain of this. We can heal our bodies by continuing to hammer cracks into its foundations, eventually pounding it into dust that joins the soil, from which new life can emerge. (p.76)

The monumental challenge we face is how to turn caretaking labor into life-affirming mass movements that can topple global capitalism. (p.109)

Genocidal policies have vastly reduced Indigenous populations, forcing many to subsist in deprived and segregated conditions. The power of Indigenous peoples lies in what they represent, “a revolution of values that re-centers relationships to one another and the Earth over profit.”

The Red Deal stresses that Indigenous people need the support of other oppressed groups to defeat capitalism, and the book strives to gather that support. However, a critical element is missing.

The working class form the single largest oppressed group in society and include the largest numbers of people in all other oppressed groups. Stripped of the means to produce their own lives, they must work for capitalists who exploit them for profit.

In different ways, workers and Indigenous people are both oppressed by the capitalist class and their State. Yet, workers appear in The Red Deal primarily as victims, not as a social force that can seize the means of production and end capitalist rule. This omission creates confusion and contradictions:

Is decolonization possible in a global imperialist power hierarchy? Is the primary social division between the Global North and the Global South or between the global capitalist class and the international working class? Can land be repatriated before seizing the means of production?

Similar questions confound all movements against oppression, and we must find the answers together.

Our liberation is bound to the liberation of all humans and the planet. (p.30)

Indigenous societies hold the memory of humanity’s egalitarian past and the possibility of a future free of oppression. They have captured the imagination of young people who have no future under capitalism.

As The Red Deal explains, Indigenous agricultural practices could restore a care-taking relationship with the land and reverse the destruction created by capitalist agribusiness. Indigenous wisdom could also be applied in urban industrial settings where most people live. By 2020, 84 percent of Northern Americans, 80 percent of South Americans, 43 percent of Africans, and 51 percent of Asians lived in cities.

Indigenous people are putting their bodies on the line for the benefit of all. They deserve more than empty gestures. They deserve our unconditional and active support. Any reduction in the power of the State to oppress them reduces its power to oppress anyone else.

The Red Deal is a revolutionary call to reject capitalism and restore a mutually beneficial relationship with our world. It deserves to be widely read, discussed, and built upon.