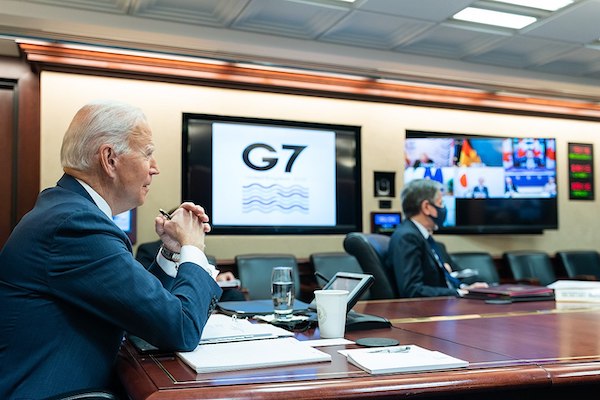 THE G-7 meeting that has just concluded has promised to donate one billion doses of anti-Covid vaccine to the rest of the world, consisting primarily of the so-called “developing” countries. The U.S. has promised 500 million doses, Britain 100 million doses; the other G-7 countries, Italy, Japan, France, Germany and Canada are supposed to make up the rest.

“One billion doses” sounds a lot, but it is extraordinarily paltry in relation to both the rest of the world’s requirements and even with respect to the enormous stockpiles of vaccines that advanced capitalist countries have with them, over and above what they need for their own population with two doses per person. It is for this reason that several international civil society organisations have dismissed the G-7 announcement as just a “public relations gimmick”.

As of now the total unvaccinated population in the world numbers 6.8 billion. The total doses required to vaccinate this population twice would come to 13.6 billion. The one billion doses promised by the G-7 therefore amounts to a bare 7.4 per cent of this requirement. Even if we take the so-called “developing” countries’ demand out of this to be just 10 billion, what has been promised by G-7 comes to only 10 per cent of this demand.

At the same time, the advanced capitalist countries have bought up substantial amounts of the available vaccine stocks and have just hoarded them. Even of this hoard, the amount proposed to be donated comes to a very small proportion. Consider for example the United Kingdom. It has a population of 68 million but it has bought up 500 million doses of the vaccine. Even assuming that the needs of this entire population are to be met from what it has bought up, it still has surplus stocks amounting to (500 – 2×68) or 364 million doses, of which it is proposing to donate only 100 million or a mere 27 per cent. Why it wishes to retain the remaining 73 per cent is not clear. No doubt fresh rounds of vaccination may become necessary if the pandemic persists; but even assuming that the current vaccines will continue to be efficacious against the virus in the days to come, and even assuming that zero purchases are going to be made from the fresh output that would be produced in the intervening period before a new round of vaccinations becomes necessary, the number of doses it is still planning to hold over and above what it is donating to the rest of the world, is enough to vaccinate afresh its entire population twice over! The same is true of the United States and the other advanced capitalist countries as well.

It may be thought that even if the proposed size of the G-7 donation is small relative to the needs of the rest of the world, its monetary value would be quite substantial. Even this claim however turns out to be unfounded. Vaccines vary a great deal in price and it is not yet clear which vaccines will be getting donated by the G-7. For the Oxford-AstraZeneca vaccine, the EU is being charged $3 per dose by the company, while other vaccines are far more expensive. The U.S. reportedly is planning to donate 500 million doses of Pfizer’s vaccine. Since it has bought this vaccine earlier for its own population at $ 19.5 per dose, let us assume that it would be paying, in round numbers, $20 per dose for what it wishes to donate. Its total contribution will then amount to roughly $10 billion which comes to a minuscule 0.05 percent of its GDP. Thus, whichever way we look at it, the G-7 offering is a mere crumb from its table.

At the same time, the platitudes surrounding this offering hide the fact that the G-7 did not discuss the question of temporary patent-waiver on these vaccines, which only the U.S. and France among them have accepted. If the G-7 had discussed and approved such a waiver, then that would have greatly increased the output of the vaccines, and been far more useful to the poor countries than the donation by it of a billion doses.

In fact, let alone other countries, even Britain, which was the host country for this G-7 summit and whose prime minister has been making the loudest noises about the need for universal vaccination, has not agreed to a temporary patent-waiver on the vaccines, which only underscores the strength of the commitment of bourgeois governments to the promotion and defence of bourgeois interests. And bourgeois interests at present lie in perpetuating the global vaccine shortage that has created a congenial setting for profiteering.

Take the case of Moderna. It got $6 billion from the U.S. government for research and development for the Covid vaccine. In return it charged the U.S. government $15 per dose, which, though much more expensive than the $3-4 charged by AstraZeneca, was cheaper than the $19.50 charged by Pfizer. Let us assume, purely for argument’s sake, that $15 represents the unit cost of production (plus a reasonable profit margin) excluding any recoupment of what the government has spent on research. Then there is no reason for Moderna to charge any more than $15 to other buyers too (or may be a little bit more by way of profit margin), for there is no justification for Moderna to make profit on what the U.S. government has spent on research on its behalf. But the CEO of Moderna, Stephane Bancel, has said that anywhere between $25 and $37 (depending on the size of the order) constitutes a “fair price” for its vaccine!

It is as a result of such profiteering that Moderna’s share price has increased six-fold between March 1 last year and end-April this year, and its CEO has built up a fortune of $5.5 billion over a roughly comparable period. Moderna, needless to say, is not the only one benefitting from the current vaccine shortage; others too are into this game and doing handsomely.

A simple statistic produced by Oxfam shows the magnitude of profiteering. According to Oxfam, the entire population of “low and middle income countries” could be vaccinated for a total sum of $6.5 billion if there is a patent waiver. On the other hand in the absence of a patent waiver, the cost would be $80 billion. The difference of almost $74 billion out of $80 billion is what would go into the pockets of the vaccine producing companies if the entire population of these countries was to be vaccinated. Put differently, more than 90 per cent of the cost of vaccinating the population of these countries at prices inclusive of patent-protection would go into the pockets of those who hold the patents.

Bourgeois governments are interested in protecting such profiteering. Those governments which have agreed to a temporary patent-waiver want this profiteering to end after a few months, which is the time needed to have an agreement at the WTO; those opposed to such a waiver want this profiteering to go on. No effort was made at the G-7 meet to discuss these two positions and reach some agreement on how soon to end such profiteering. Even the U.S. and France are not reported to have made any special efforts to persuade their recalcitrant colleagues within G-7 to drop their opposition to a temporary patent-waiver.

Patent-waiver however is important not just for bringing down prices. Its importance arises above all for increasing the production of vaccines. But there is little evidence of any progress towards it. All that has happened recently is that during a meeting of the WTO on June 9, countries finally backed “launching a process towards drafting an agreement”, and “agreed on the urgency of this discussion”!