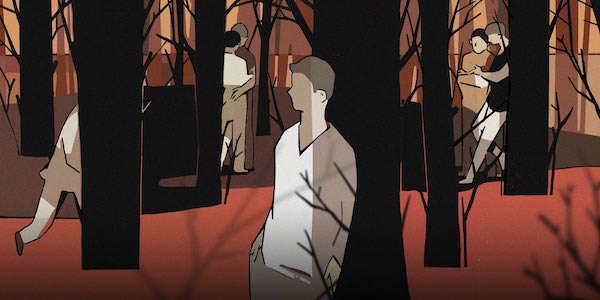 In the dark, tightly packed urban villages of a South China industrial zone, Garden Park is an oasis for rural migrant gay men like Meilan. They come to relax, chat, or cruise for sex in nearby trees or public toilets.

One of the best nights Meilan ever spent at Garden Park was an ordinary evening in the middle of autumn. Around one hundred gay men — many of them migrant workers who lived nearby — were sitting on the handrails of a rock bridge, looking down at the artificial lake below; some had brought traditional mooncakes and other snacks to share with friends in the moonlight. One brought along a Bluetooth speaker and played music for people to dance to. “It was my favorite time in the park,” he recalled.

It was so lively. Hundreds of our people were laughing and chatting under the moon until midnight.

Meilan first started visiting Garden Park seven years ago, not long after he migrated to the city from the countryside. He was drawn in by the dance team performing by the park’s front gate. “Back then, the first two lines of the park dance team were ‘sissy’ (niang) young men,” he said.

I knew immediately this is where I belong.

Soon, Meilan joined the gay community members that congregated in the park. At its peak, this community consisted of hundreds of queer men, most of them rural-to-urban migrants living nearby, but also some accidental visitors or people who had heard about the park from other gay men or on social media.

Prior to the late 1990s, when male homosexuality was still criminalized and classified as a mental illness in China, cruising spaces — known as “spots,” “fishing grounds,” or “floating grounds” — were important settings for urban gay men to meet and get to know each other through agreed-upon codes that would not publicly reveal one’s sexuality.

But over the past few decades, as cosmopolitan consumer spaces and gay bars have sprouted up across urban areas, the act of cruising in public parks has shifted from being a shared secret to an outdated practice — one that embodies the shame and danger associated with homosexuality in earlier eras.

The resulting emergence of a consumption-based gay identity has promoted gay visibility and improved public perception of the gay community. But it has also facilitated a dichotomy between “good” and “bad” homosexuals, wherein supposedly decent homosexual desire is restricted to private spaces and visible indications of homosexuality are considered indecent and associated with sexually transmitted diseases. This stereotype has been internalized: On forums and social media dominated by middle-class gays, public cruising sites are universally depicted as unsafe, unhygienic, and promiscuous; those who frequent them are stigmatized as indulgent and obscene.

These stigmas deter most middle-class gay men from frequenting cruising sites. Yet cruising spots are far from extinct. In industrial zones, populated by rural-to-urban migrants excluded from more cosmopolitan and expensive spaces, they remain a thriving center of social activity. Few migrant workers are willing to visit upscale gay bars and clubs in downtown areas, where entrance alone generally costs at least 100 yuan ($15.50). “Going to the city takes two hours, and if I miss the last bus back, I need to get a hotel room,” one cruiser told me.

If I had that kind of money, why wouldn’t I buy something nice to eat?

Classism is another issue, he added: “They are all ‘high-end pussies’ (gaodang bi). They wouldn’t look at people like us in a thousand years.” Although most gay men use dating apps, regardless of class, gay migrant workers tend to feel marginalized on the apps due to their emphasis on appearance. And since many of them live in factory dormitories, even if they do successfully match with someone, they cannot simply invite them over.

In this environment, cruising parks remain one of the few places where gay migrants can meet and socialize with each other. This contact is important, since while sexual encounters might drive many men to cruising spaces, the spaces themselves are about much more than sex. Gay men in Garden Park can be divided into two groups: those there to hang out with other gays and those there to have sex. The former mostly wants to socialize and celebrate their gayness. They may desire sex, but it is not their priority. Primarily comprised of self-described “sissy” migrant workers, drag queens, or trans women — the outcasts of the urban gay scene — they go to laugh, gossip, and meet up with people they relate to.

Then there are the straight-acting and discreet cruisers, many of them local elderly men, looking for casual sex. Tensions between the two groups are palpable. For discreet cruisers, the louder ye ji, or “wild chickens,” are despicable and undesirable sexual subjects, though after spending more time at the park, some come out of the dark corners and join the partying group. The “wild chickens” also occasionally hook up with the cruisers.

It’s worth noting that the migrant gay men who frequent parks do not just stick to their own circles. They also participate in public activities with the park’s heterosexual visitors. For example, while the square-dancing groups at Garden Park are predominantly made up of middle-aged women, several of the park’s young gay men have become dance leaders or coaches.

Despite cruising spots’ relative decline, Garden Park remains an important urban commons where less privileged gay men can gather and experiment with alternative lifestyles. The ties built within the parks’ grounds can extend far beyond them, developing into intimate relationships and lasting friendships. Gay migrants, who otherwise have few connections in the city, often count on friends made at the park for mutual aid and shelter to get through unemployment and homelessness. Those who grow particularly close might establish queer households, calling each other “sister,” “mother,” or “daughter.” They live in shared apartments and take care of each other through times of danger and poverty.

The queer social relations that characterize cruising spaces might be invisible to outsiders, but they are not trivial or fleeting; they are certainly not “obscene.” Marginalized by both heteronormative spaces and more affluent queer urbanites, gay migrant workers have reshaped the city landscape to produce their own public gay culture and build crucial networks of social support. As Meilan put it:

The park is our home. My sisters are my family.

All names of people and places have been changed.