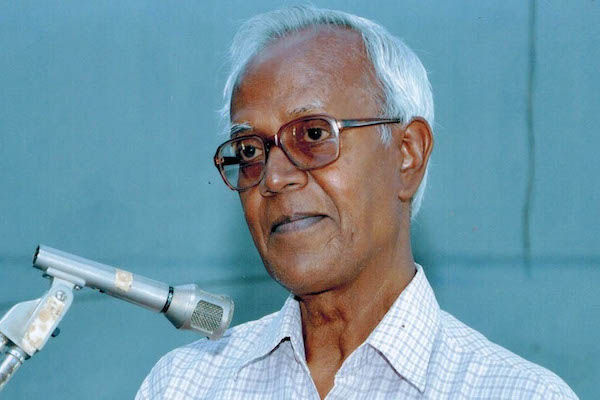 We, the friends and family members of those accused in the Bhima Koregaon Conspiracy case, are deeply pained and shaken to the core by the loss of Father Stan Swamy. This is not a natural death, but the institutional murder of a gentle soul, committed by an inhuman state. Having spent his life amongst the Adivasis in Jharkhand, fighting for their right to resources and lands, Father Stan did not deserve to die in this manner, far from his beloved Jharkhand, falsely imprisoned by a vindictive state.

Father Stan was the last of the 16 people to be arrested and falsely accused in the Bhima Koregaon case and sent to prison. At 84 years of age and ailing due to Parkinson’s Disease, Father Stan was the eldest among those arrested and the frailest. Despite his feeble health, he inspired everyone with the strength of his character and his unshakeable integrity. Even as his health degraded in the prison, his thoughts and prayers were always with his co-prisoners. In his letters, he wrote about his other prison mates who were also falsely fabricated in different cases, and agonized over the prevailing injustices in society.

While remembering his gentleness, his humanity and his compassion, we cannot forget the immense injustice of his detention. It is unconscionable that someone of his age and ill-health was put in the prison in the first place, and that too, in the middle of an ongoing pandemic. The investigation against him was already complete by the time that he was arrested on 8th October, 2020, and he was clearly not a flight risk. His arrest and subsequent detention in Taloja Prison in Navi Mumbai was already a death sentence pronounced against him.

At the time of his arrest, Fr. Stan released a moving video statement, where he stated softly but clearly, that the NIA sleuths were accusing him of a Maoist conspiracy based on certain documents recovered from his computer—documents which he had never seen before and certainly did not place them on his computer. His claims that these documents had been surreptitiously planted was firmly upheld through the stunning disclosures of Arsenal Consulting and Washington Post made public earlier this year, which clearly detailed the method through which incriminating documents had been remotely planted on the computers of the Bhima Koregaon accused using the Netwire malware. We are outraged that Father Stan had to pay the price of this malicious fabrication of evidence with his life.

The callous disregard to Father Stan’s health continued after his imprisonment, when he was not even allowed a straw and sipper cup in prison. Even for something as basic as this, he needed to move the court, which moved at a frustratingly leisurely pace. Later, as his health continued to deteriorate in prison, his medical bail plea was mechanically turned down by the same blind, unfeeling and insensitive NIA court. Even his Covid disease was not diagnosed in jail, and could only be detected after he was moved to the hospital on orders of the High Court.

We cannot forget the heartbreaking speech of Father Stan before the High Court during his medical bail appeal, where he gave a moving account of his deteriorating health. He told the court in no uncertain terms that he did not expect to live long and wished to die amongst his people in Bagaicha, Ranchi. It is appalling that such a simple request could not be met by our judicial system.

While we grieve at the passing away of Father Stan Swamy, we unequivocally hold the negligent jails, the indifferent courts and the malicious investigating agencies firmly responsible for his unfortunate death. We fear for the health and lives of our family members and colleagues, who are facing the similar injustices in the same jails, under the same unaccountable system. We continue our vigil for everyone’s safety and security, and as Father Stan would appreciate, “we refuse to be silent spectators and are ready to pay the price!”