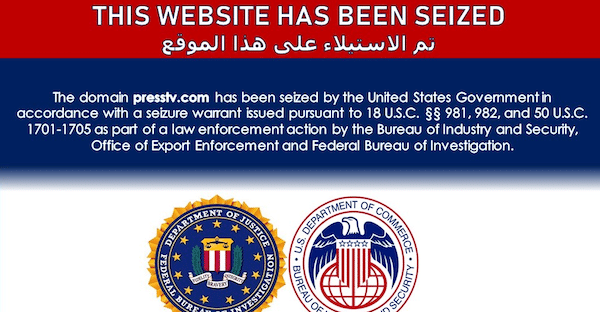 The Biden administration made headlines last week as it moved to shut down the websites of 33 foreign media outlets, including ones based in Iran, Bahrain, Yemen and Palestine. Officials justified the decision by claiming the organizations were agents of “disinformation.” 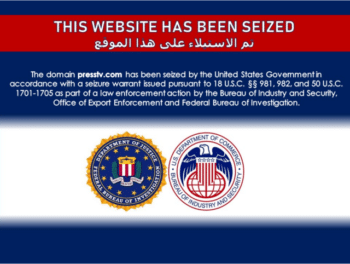 The U.S. government boasting of its censorship of Press TV.

The most notable of these is probably English-language Iranian state broadcaster Press TV. Visitors to PressTV.com are now met with the seal of the Department of Justice and the FBI, and a message notifying them that the domain “has been seized by the United States government.” (The site has since migrated to an Iranian-based domain, PressTV.ir.)

This is far from the first time Press TV has been targeted. Eighteen months ago, Google deleted the Iranian channel’s YouTube account; earlier this year, Facebook did the same, banning its page, which had over 4 million followers. In 2019, the U.S. also arrested American Press TV presenter Marzieh Hashemi, holding her without charge for over a week. Hashemi, a Muslim, said her headscarf was forcibly removed, and she was offered only pork to eat.

Western outlets covering the new seizures did not frame them as an attack on the First Amendment (Washington Post, 6/23/21; CNN, 6/23/21; Fox News, 6/23/21), many preferring instead to discuss the shortcomings of the Iranian media landscape. Slate (6/24/21), for example, reminded readers that Iran “blocks foreign social media sites, censors critical foreign outlets and jails reporters.” While this may be perfectly true, Slate suggested it was possible for the Biden administration to make a “clear distinction” between when Iran does it and when the U.S. carries out similar actions; “disinformation and election interference are serious problems,” it helpfully noted.

Decrying the state of press freedoms in official enemy states is a favorite pastime of corporate media (FAIR.org, 11/1/06, 5/20/19, 10/20/19). It is a point of pride in the U.S. that freedom of speech is written into the Constitution. Increasingly, however, if we want to find direct government censorship of speech, we don’t have to travel far. 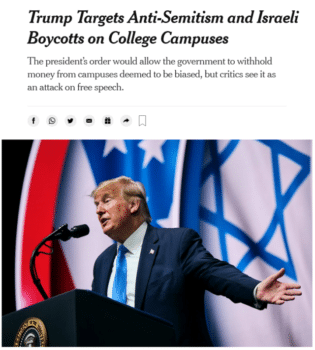 Donald Trump’s claim that his anti-BDS order “targets antisemitism” was presented as fact in the New York Times headline (12/10/19); the perspective of “critics” that it was “an attack on free speech” was treated as an allegation in the subhead.

Under President Donald Trump’s leadership, freedom of the press nosedived. Reporters working for foreign outlets like RT America were forced to register as “foreign agents,” under a 1938 law passed to counter Nazi propaganda. The channel was subsequently taken off the air in Washington, DC.

Meanwhile, critics or opponents of U.S. foreign policy have been constantly penalized and often pulled off major social media platforms (FAIR.org, 4/16/19). The Trump administration also attempted to force the sale of Chinese-owned social media app TikTok to an American company, and to halt Huawei’s spread as 5G network provider of choice to the globe.

Internally, Trump demanded the NFL fire star quarterback Colin Kaepernick for peacefully protesting during the national anthem. He also directly interfered in the university curriculum; his Department of Education ordered the universities of Duke and North Carolina at Chapel Hill to rewrite their Middle Eastern Studies programs, as they were overly “positive” towards Islam and did not promote U.S. national security goals.

Trump also issued an order all but outlawing the Boycott Divestment and Sanctions (BDS) movement against Israel. Since the Civil Rights era, boycotts have been understood to be protected speech under the First Amendment. Nevertheless, since 2015, 35 U.S. states have approved laws penalizing BDS. Effectively, anyone wanting to take public money in any form must sign a pledge to never boycott the state of Israel.

Last year, journalist Abby Martin (herself a target of social media censorship) was blocked from giving a lecture at Georgia Southern University because she refused to sign those First Amendment rights away. Public school staff have been fired for the same thing.

Perhaps most worryingly, Trump’s base is on board with tearing up the First Amendment. A 2018 poll found that 43% of Republicans agreed that “the president should have the authority to close news outlets engaged in bad behavior.” 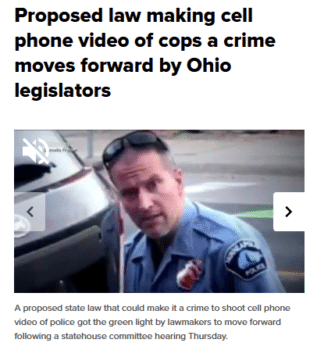 A proposed Ohio law could outlaw videos like the one that led to Derek Chauvin’s conviction for murdering George Floyd (News 5 Cleveland, 6/24/21).

Even after Trump’s defeat, the GOP is still pushing through regulations limiting speech across America. A new Ohio law making filming police illegal is currently rapidly advancing (News 5 Cleveland, 6/24/21). Critics note that the bill would outlaw recording crimes like the murder of George Floyd.

Meanwhile, laws banning the teaching of Critical Race Theory—a paradigm that examines structural racism in U.S. institutions—have been passed or are being considered in at least 21 states (US News, 6/23/21). This has been egged on by the conservative press, who have turned the school of thought into an ideological fixation, mentioning it nearly 1,300 times in the past three and a half months (Media Matters, 6/15/21).

These bans on Critical Race Theory are mirrored by new “Don’t Say Gay” laws, which forbid the teaching of LGBT history in K-12 schools, or give parents the opportunity to pull children from classes mentioning key historical events like the Stonewall Riots. A swath of red states have either passed or are currently considering such legislation (New Republic, 6/28/21).

In another worrying move for free speech advocates, Florida Gov. Ron DeSantis has just signed a bill requiring both university students and their professors to register their ideological views with the state (Salon, 6/23/21), supposedly in a bid to promote “intellectual diversity” on campus. Staff fear the results will be used to purge or deny employment to those deemed insufficiently conservative.

DeSantis is also currently overseeing a huge rewrite of the state’s school curriculum, in an effort to ensure that children are definitively instructed that “communism is evil,” in his own words (WBNS, 6/22/21). Children will be provided with “first-person accounts of victims of other nations’ governing philosophies who can compare those philosophies with those of the United States.” DeSantis presents the move as providing children with facts rather than “trying to indoctrinate them with ideology.” 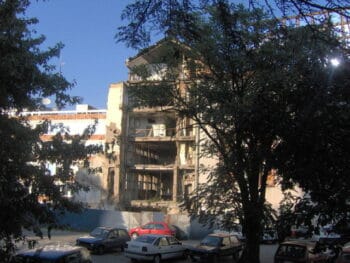 The offices of Radio TV Serbia after being deliberately targeted by U.S. bombers.

The attempts to muzzle the press did not start with Trump, however. President Obama oversaw a war on whistleblowers like Edward Snowden, and ensured that Julian Assange has spent the best part of a decade in hiding or in prison. Assange’s most notable journalistic action was to release the Iraq War Logs and the Collateral Murder video, which showed U.S. pilots massacring civilians—including two Reuters journalists—in cold blood.

Outright attacking media outlets is a common tactic for the U.S. military. During the Kosovo War, the U.S. deliberately targeted the buildings of Serbian state broadcaster RTS, killing 16 people (FAIR.org, 8/2/00). Four years later, it conducted airstrikes on the offices of Abu Dhabi TV and Al Jazeera in Baghdad at the same time as American tanks shelled the Hotel Palestine. On the incident, Reporters Without Borders, stated: “We can only conclude that the U.S. Army deliberately and without warning targeted journalists” (FAIR.org, 4/10/03). This was far from the only military attack on Al Jazeera during the invasion. The Bush administration even had the network’s journalist Sami al-Hajj kidnapped, holding him inside the notorious Guantánamo Bay prison camp for six years without charge.

Although many still like to hold up the United States as a bastion of free speech uninhibited by government censorship, in this new era, the idea is becoming increasingly difficult to sustain. While corporate media like to highlight the many press freedom shortcomings of hostile foreign nations, the censorship worries start much closer to home.