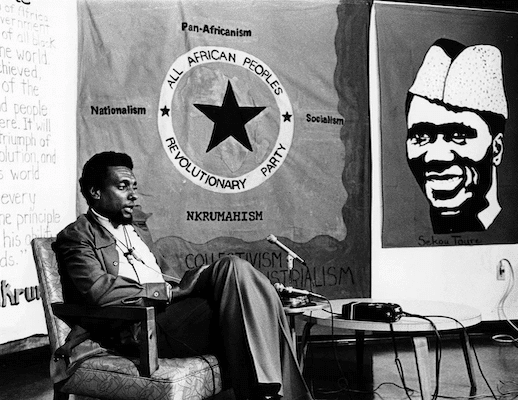 This last June weekend of 2021 (June 29th to be exact) represents the 80th born day of Kwame Ture (formally Stokely Carmichael). As a result, numerous tributes are taking this week to honor the legacy of Kwame and his outstanding work to contribute towards the freedom of African people everywhere and justice for the entire planet.

That legacy of work by Kwame is well documented so if you are not aware of it, you should make it a priority to engage in study around his work and contributions. His work touched the civil rights, Black Power, and Pan-African movements and his selflessness and strong organizing skills helped create revolutionary cadre who continue to carry out the work he engaged in today.

Its been 23 years since Kwame’s physical existence ended, but the number tributes to him this weekend illustrate the degree to which he is still held in very high esteem by the masses of African people everywhere. The reasons he is respected so highly are being repeated during the tributes. People admire and respect his selflessness, dedication, and commitment to building a collective movement for African emancipation (Pan-Africanism), or as Kwame himself was fond of putting it the achievement of “the power of the organized masses!”

The intent of this piece isn’t to restate Kwame’s overwhelming contributions, but instead, to discuss several police inspired lies against Kwame’s legacy designed to disrupt his influence on new and developing generations of revolutionary African youth who are not old enough to have worked and/or been directly influenced by him. Its important that we never forget the work of the international capitalist/imperialist network. That work is to ensure that the masses of people are always kept in confusion about what best represents their interests as opposed to what represents the interests of the thugs who rule the world today. Their tactic in this regard is to use their mass resources (mass media, organized education, faith organizations, and all elements of society) to attempt to convince us that the interests of the masses are the same as those of the ruling capitalist classes. This week is their annual Fourth of July disgrace where they want to convince the African, Indigenous, and other working class masses that we should honor and celebrate the “independence of the U.S.” Anyone who studies even a surface level of history understands how absurd this is, yet this is the power structure’s tactic and no one can argue that despite how absurd it may be, it has been overwhelming successful for centuries. As a consequence, these thugs understand that they must pull out all stops to attempt to tarnish the image of anyone as principled and committed as Kwame Ture.

The first example of this attempted sabotage is their effort to paint Kwame as a police informant. The House of Un-American Activities (HUAC) was a committee within the U.S. House of Representatives in Washington D.C. It was formed in 1938 with the specific purpose of exposing and creating the conditions where individuals and organizations deemed by the committee to be un-American would be exposed and punished. Many African activists and revolutionaries from W.E.B. DuBois and Shirley Graham DuBois to Paul Robeson were targeted by HUAC. In 1970, in response to U.S. government’s efforts to attack the Black Power movement and the resulting urban rebellions (and their potential to be transformed into revolutionary struggle), HUAC subpoenaed Kwame Ture, then Stokely Carmichael, to testify about organizations HUAC considered leaders of the urban rebellions like the Black Panther Party (BPP), Republic of New Afrika, Nation of Islam, etc. Just as is the case today, House of Representative and senate committee sessions are attended by congressional people, their staff, and media representatives. And, all of those entities, as well as Kwame’s legal representatives, reported that during the HUAC session Kwame was forced to testify in, Kwame never answered a single question asked of him, invoking the 5th amendment of the constitution which permits you to refuse to answer questions on grounds that you don’t want to potentially incriminate yourself or anyone else. The number of actual witnesses to this meeting still alive today are numerous. As are the number of people who confirm that the only reason why Kwame answered the subpoena (the potential for arrest at that time was the penalty for refusing to cooperate) was on the advice of movement elders who instead instructed him to show up and consistently invoke the 5th amendment instead of not showing up and risking losing his passport and other repression. Despite the high degree of evidence about what actually happened at that meeting, which was clearly nothing, that didn’t discourage the Federal Bureau of Investigation (FBI) from maliciously leaking that Kwame snitched on several other movement leaders and organizations, most notably Huey P. Newton and the Black Panther Party (BPP). The FBI’s typical tactical approach to spreading this type of slander is to utilize its mass network of police informants nationwide and force those people to spread harmful rumors about people on the streets. The FBI did this understanding fully our lack of political consciousness and sophistication as a people and as a result, the slander against Kwame as a police informant spread and still exists to this day. This was true even among high profile people within the movement. This is illustrated by the fact Huey P. Newton, upon his release from jail in August of 1970, stated that “Stokely Carmichael is a police agent” as a result of this rumor circulating throughout Black Panther circles. Many people still active as revolutionary Pan-Africanists, particularly those within the All African People’s Revolutionary Party (A-APRP) still come across people who believe this slander. People who are often too young to have even been alive in 1970 which demonstrates the effectiveness of the FBI’s smear campaigns against activists that have ruined many people’s credibility and gotten people killed (Alex Rackley, Samuel Napier, among others).

Another example is the still often stated (particularly in bourgeoisie feminist circles) joke Kwame made to Student Non-Violent Coordinating Committee (SNCC) members after a meeting. In response to a question about the role of women in SNCC, Kwame was reported to have said “the role of women in SNCC is prone.” Although made in the mid 1960s, this statement by Kwame was being brought up regularly at his speaking events during question and answer periods up to his death in 1998. The reason this is so is because of the coordinated misinformation campaign by police agencies to ensure the statement continued to carry life and spread among activist circles. This was done through utilizing the same coordinated communication network used through police informants in the streets by instead utilizing rightwing college professors, faculty and staff. It was in fact a university student activities director who first informed me of the comment in 1982 when a group of us students in the Pan-African Student Union at the school I intended approached the director with a proposal to bring Kwame to campus to speak. The statement has been repeated nonstop for 50 years, but the context is of course never provided. The comment was made by Kwame to a group of three SNCC women, African and European women. It was made in the early hours of the morning after a long and tension filled SNCC meeting. It was a comment made between four friends who had mutual respect and admiration for each other based on the contributions and sacrifices they had observed each other make consistently to the cause. It was a joke between friends and nothing about Kwame’s consistent work to uplift the role of women (actual behavior superseding a simple comment), including his major contribution towards helping create the All African Women’s Revolutionary Union (A-AWRU) within the A-APRP in 1980, has been able to diminish the spreading of this comment, misstated, misquoted, and misinterpreted by people up to this day.

Finally, we revisit the false narrative around Kwame’s reason for moving to Guinea-Conakry, West Africa, in 1969. Of course, the FBI’s version for the reasons for Kwame’s physical relocation (which has often been repeated by many Africans as well) was that he was indeed a police informant and his move to Africa was to flee accountability for this. Obviously, nothing could be farther from the truth. Anyone who understands Pan-Africanism and Kwame Ture’s strong contributions to it, recognizes this lie for not only its absurdity, but its impracticality as well. To follow this logic, Kwame Ture gave up the opportunity to advance himself within the capitalist system as political contemporaries of his did like Jesse Jackson, Julian Bond, Marian Berry, etc., to live simply in Guinea, one of the most impoverished countries in the world. Even if he had wanted to “flee” the U.S., he could have gone any number of places that would have offered him much more in terms of material wealth and comforts than Guinea-Conakry. There is only one reason Kwame Ture moved to Guinea. That reason was because he wanted to work directly with Pan-African revolutionaries Kwame Nkrumah and Sekou Ture as well as Amilcar Cabral who was living and training in Guinea at the time and the other militants of the revolutionary Democratic Party of Guinea (PDG). He wanted this because he understood, before most everyone else at the time, that the work coming out of Guinea from Nkrumah, Sekou Ture, and the PDG, would form the foundation for the strategy to achieve revolutionary Pan-Africanism. Even in 1969, Kwame Ture understood (as a result of his being influenced by Kwame Nkrumah) clearly that revolutionary Pan-Africanism was the highest expression of Black Power. His moving to Guinea and continuing his work as an organizer for the A-APRP and PDG was logical and consistent and to suggest otherwise would be like saying a college basketball player who wants to advance their playing career is inconsistent by signing a contract to play in the National Basketball Association (NBA).

The police are organized and they are always working overtime. As a result, they continue to perpetuate these slanders against the principled work of Kwame Ture and many other genuine revolutionaries. They have similar misinformation campaigns being waged against Assata Shakur, Che Guevara, Fidel Castro, Malcolm X, Sekou Ture, Kwame Nkrumah, etc. That’s their job. We will never be upset because a dog chases a bone. Instead, we encourage every serious and sincere student of history to study the actual legacy of Kwame Ture. We suggest you investigate not only his work from 1961 to 1968 in SNCC and the BPP, but the last 30 years of his life as an organizer in the A-APRP and PDG. As great as his contributions to SNCC and the BPP were, it was this work in Africa that solidifies Kwame’s legacy. The question you have to raise for yourselves is why it is that his last 30 years are shrouded in mystery and misinformation? Why is it that you can know more about misinformation from the 60s and 70s about Kwame and nothing about the work of the A-APRP in Africa or the PDG, African Party for the Independence of Guinea-Bissau (PAGIC), etc. that is still taking place today? The answer is again, the role of our enemies is to keep us confused. The capitalist system is not going to educate you about the true legacy of Kwame Ture because once you know it, you will become energized to carry out that legacy. The capitalist ruling classes understand clearly, even if we do not, that the day that consciousness takes hold is the day their time is numbered.