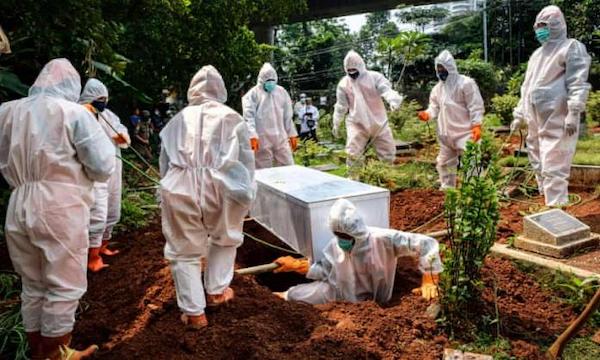 In countries where public health restrictions were in place, they were half-baked or have been lifted too soon. Where they are imposing them now, it’s too late; the Delta variant of the coronavirus is surging around the world.

A recent preliminary study by David Fisman and Ashleigh Tuite, from the Dalla Lana School of Public Health in Canada, estimates that, compared with the original coronavirus strain coming out of Wuhan, China, Delta could increase the risk of hospitalisation by 120 percent, the risk of intensive care admission by more than 280 percent and the risk of death by more than 130 percent. Yet many governments are willingly letting the variant circulate.

In many places, the justification is that vaccine rollouts have protected the most vulnerable. Real world evidence, at least as it relates to the AstraZeneca and Pfizer vaccines, suggests that the efficacy of full inoculation against symptomatic COVID is 60 percent and more than 80 percent, respectively. Against hospitalisation and death, the efficacy of both is more than 90 percent. Other vaccines provide similar protection; some are not as good.

But the problem is that little more than 25 percent of the world’s population is protected. In only thirteen of nearly 200 countries are more than 50 percent of people fully vaccinated. There are just five with a population greater than 9 million: the United Arab Emirates (67 percent fully vaccinated), Chile (60 percent), Israel (58 percent) Hungary (53 percent) and the United Kingdom (52 percent).

Those rates are nowhere near high enough. About one-third of adults in the United Kingdom are still unvaccinated, according to the BBC. In the capital, the situation is worse still. The Greater London Authority reports that just 55 percent of adults are fully vaccinated—a figure that, by definition, excludes more than 2 million of the city’s residents under the age of eighteen, who make up more than 20 percent of the population. That’s important, because the Delta variant reportedly is more dangerous than previous coronavirus strains for young, unvaccinated people.

Despite the Delta onslaught, public health measures have been weak, evidenced by the packed Wimbledon tennis and European Football Championship crowds recently. The result is that infections are rapidly rising. At the end of May, new daily coronavirus cases in the UK hovered around 2,500, down from the January peak of 60,000. Deaths were down from more than 1,200 per day to fewer than ten. Now, infections have climbed to more than 40,000 per day, and Health Secretary Sajid Javid says the number could reach more than 100,000 per day. The number of deaths is also rising. There will be thousands of deaths in the coming months, which could have, should have been prevented. Yet the government is set to lift the remaining public health restrictions.

In Israel too, as the vaccination rate increased, the government relaxed restrictions. Daily case numbers are now up by more than 160 percent in a fortnight, although the number of serious cases remains low. In the three other larger countries with a full vaccination rate of more than 50 percent, the situation is different, for now. Hungary recorded fewer than 200 cases of any coronavirus strain in the week ending 12 July—down by more than 20 percent in a fortnight and the lowest since August last year. But the Delta variant was detected only recently (late May), the vaccine rollout has slowed significantly and the government recently eased mask-waring requirements, according to news site Hungary Today. So the situation there could quickly deteriorate like it has in other places.

Chile’s infections are down by more than 40 percent in a fortnight, to around 2,000 new cases per day, after public health restrictions were imposed early last month due to a surge. But the second case of the Delta variant was registered only in late June, and the capital, Santiago, is now opening—another case of a government gambling with people’s lives to satisfy business interests.

In the United Arab Emirates, new infections are down nearly 30 percent to around 1,500 per day and deaths are running at about five per day. The government there is at least maintaining mask mandates and gathering limits. Spain, which has a full vaccination level close to 50 percent, is in the grip of a third wave of infections, driven by the Delta variant, after public health restrictions were scrapped in May. At this point the number of deaths continues to fall. Is that likely to remain the case now that the country has the highest number of daily infections in Europe?

The United States had been a success story of sorts in recent months. In June, new daily case numbers hit their lowest point since the beginning of the outbreak in March last year. It was the same story with hospitalisations and deaths. And the Centres for Disease Control says that more than 160 million people are fully vaccinated. It also says that just 5,000 patients with vaccine breakthrough infection—that is, people who were fully vaccinated but nevertheless contracted COVID-19—had been hospitalised. Of those, nearly 1,000 had died by 6 July. That’s just 0.003 percent of the vaccinated population being hospitalised with, and 0.0006 percent of the vaccinated population dying from, COVID-19—a huge breakthrough. (Unfortunately, one that has been denied to most of the world’s population because protecting the profits of the pharmaceutical companies has been deemed more important than protecting lives.)

Still, more than half the U.S. population is not fully vaccinated, and the Delta variant now accounts for close to 60 percent of new cases, its proportion of new infections doubling roughly every two weeks. So Delta’s impact is only just being felt. Case numbers are up by more than 100 percent in a fortnight to more than 40,000 per day. Average daily deaths never dropped below 170 in the US, and they are now at nearly 300 per day and climbing. Yet public health restrictions have been lifted across the entire country.

Many of the people getting infected will develop “long COVID”, which reportedly affects more than 20 percent of people who contract the disease. Medical experts can’t say exactly what the illness is. But some 13 percent of people still present symptoms more than 13 weeks after first contracting the disease. It can be debilitating—perhaps analogous to chronic fatigue syndrome. Whether long COVID will be a problem among vaccinated people who get breakthrough infections is not yet clear, but probably will be by the end of the year. If it turns out to be good news on that front, it will be cold comfort to the masses of newly infected people, who overwhelmingly are unvaccinated.

While the situation is deteriorating in many countries with only modest vaccination rates, parts of the less developed world—those with poorer public health systems and without access to adequate supplies of vaccines—are in dire straits.

Indonesia now has the highest number of new daily cases of any country, and only 6 percent of the population is fully vaccinated. Official case numbers and deaths have quadrupled in a month, to 60,000 and nearly 1,000 respectively. As with India several months ago, there is a high likelihood of undercounting. More than 17 percent of all tests are coming back positive, according to Oxford’s Our World in Data website. Emergency suppression measure introduced early this month in Java, the most populous island, seem not to have had much effect. Cases are also growing or surging in Myanmar, Vietnam, Laos, Malaysia, Bangladesh and Thailand. In fact, in almost every region of the world—North America, Europe, the Middle East, Africa and the Asia-Pacific—case numbers are rising.

“The idea that everyone is protected and it’s ‘kumbaya’, and everything goes back to normal is a very dangerous assumption anywhere in the world. We’d ask governments to be really careful at this moment not to lose the gains that we’ve made”, Mike Ryan, executive director of the World Health Organization Health Emergencies Programme said on 9 July.

The gains were most visible in the headline figures: global daily new infections dropped by more than 50 percent between April and June; daily deaths dropped by almost half. But infections are now up by 25 percent in two weeks, to almost half a million per day. While this continues, new mutations, such as Delta plus, which first appeared in March, will keep emerging.

It’s as clear now as it has been for more than a year that governments are interested in doing only as much in the interests of public health as will allow them to keep businesses open or get them operating again after taking brief emergency action against the virus. It’s a huge gamble. Like almost every gamble during this pandemic, the result will be ongoing mass casualties around the world.