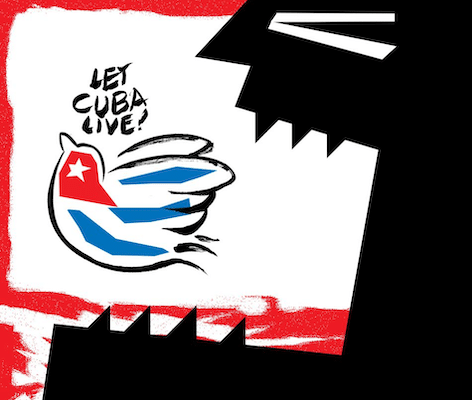 On 23 July 2021, a full-page appeal appeared in the New York Times calling on United States President Joe Biden to withdraw the vindictive U.S. blockade against Cuba. As that appeal went to press, I spoke to Chinese journalist Lu Yuanzhi of Global Times (GT). The remainder of this newsletter carries the contents of that interview, which ranges from the U.S. policy against Cuba to the New Cold War against China. 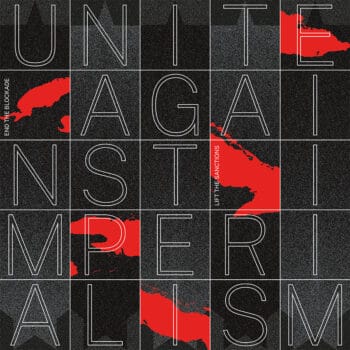 Prashad: Cuba, since 1959, has offered an alternative vision for humanity, one that puts the well-being of people before the requirements of profit. That Cuba–a poor country–was able to vanquish hunger and illiteracy rather quickly, while the U.S.–a rich country–continues to be plagued by such elementary problems illustrates the humanity at the core of the socialist project. This is unforgivable for the elites in the U.S. Hence, they continue to tighten the wretched blockade against Cuba. In fact, they use all kinds of means–including social media warfare, a part of the hybrid war strategy–to undermine the confidence of the Cuban people. This was attempted on 11 July, but it failed. Tens of thousands of Cubans took to the street to defend their Revolution.

GT: Although the UN has overwhelmingly condemned the U.S. blockade against Cuba for many years in a row, Washington has continued its inhumane policy. What does this mean for the U.S’. international image? U.S. President Joe Biden said, ‘The U.S. stands firmly with the people of Cuba’, but his administration has no intention to lift the blockade. Who are the audiences of such hypocritical diplomatic rhetoric?

Prashad: The U.S. does not ‘stand firmly with the people of Cuba’. In fact, the U.S. stands on the neck of the Cuban people. This is clear to the 184 member states of the UN that voted on 23 June to send a message to the U.S. to end the blockade. The fact is that President Joe Biden has refused to even roll back the 243 coercive measures implemented by Donald Trump. The world recognises the cruelty of the blockade on Cuba and of the illegal sanctions policy that the U.S. exercises against at least 30 countries around the world. But, because of the power of the US, there are only a few countries that are willing to do more than vote in the UN General Assembly on behalf of Cuba. 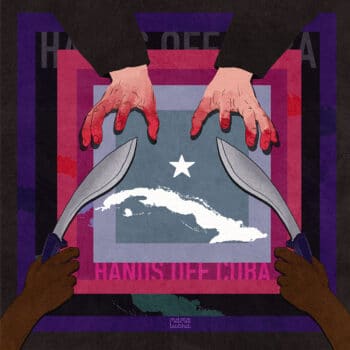 GT: The U.S.’ handling of the COVID-19 epidemic is obviously a failure, with the highest death toll across the world. In the face of the pandemic, the U.S. capitalist system’s value of economics over human life has been fully exposed. The pandemic has put a dent in the U.S.’ institutional advantages and discursive power. Has the capitalist system become dysfunctional in the face of major crises?

Prashad: The capitalist system is very good at generating vast amounts of commodities and very high qualities of certain kinds of commodities. It is good at producing high-value medical care, for instance, but not so good at producing quality public health care. This has to do with the profit motive. Since there is great social inequality, most of the public does not have cash in their pockets for quality health care, so health care simply is not affordable or possible for the vast majority. It is this attitude towards health and education that shows us the inhumane side of capitalism. During the pandemic, 64 countries spent more to service their external debt than on health care. Such are the ways of the capitalist system: to ensure that wealthy bond holders in the developed world make their money while the poor struggle to survive.

Prashad: China’s approach to the pandemic has been along the grain of the World Health Organisation’s recommendation: use science, compassion, and collaboration to tackle the pandemic. The Chinese people volunteered to help each other, doctors who are Communist Party members volunteered to go to the frontlines, and the Chinese state opened its coffers to ensure that the disease was vanquished and that the people did not suffer from a prolonged economic downturn. There is much to be learned from this approach; our studies on CoronaShock delve into this.

This stands in stark contrast to the anti-science, inhumane, and narrowly nationalistic attitude of many of the Western countries and several others in the developing world; their approach led to chaos. It is because of the failure in places such as the U.S. that Trump, for instance, began to blame China in a racist way for the emergence of the virus. We know scientifically that viruses appear for a variety of reasons, and none of them have to do with race. Chinese intellectuals and others need to offer clear accounts of Chinese developments, including the abolition of extreme poverty and the rather quick defeat of COVID-19. Such accounts will help people in other parts of the world understand the relationship between public action and state action in China. This is widely misunderstood, largely because of the information war pursued by the U.S. and its allies. On 23 July, Tricontinental: Institute for Social Research published a key text called Serve the People: The Eradication of Extreme Poverty in China based on field studies of the abolition of extreme poverty. 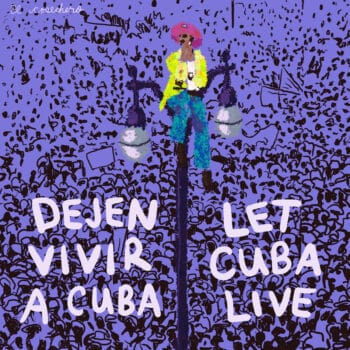 GT: The West’s narrative of the CPC in recent years has always avoided mentioning the CPC’s positive effects on China’s social progress and global economic development. Why can’t the West objectively evaluate the CPC?

Prashad: The West cannot be objective because the West fears the rise of Chinese science and technology. For the past 50 years, Western firms have monopolised the areas of high-tech, using intellectual property laws to lengthen their copyright advantages. Developments in China are an existential threat to the dominance of these Western firms in areas such as telecommunications, robotics, high-speed rail, and new energy technology. It is the fear of losing supremacy in these key tech sectors that drives the ‘new cold war’ against China and prevents a sober assessment of Chinese developments.

Rather than develop a sensible attitude, the West has gone in four directions. First, it has prosecuted a trade and economic war against China to maintain U.S. economic and technological supremacy. Second, it has pressured developing countries and U.S. allies to break with Chinese firms and isolate China. Third, it has attempted to smear China’s reputation by misleadingly using the framework of ‘human rights’ and by supporting anti-government and separatist forces within China. Lastly, it has pursued military provocation, particularly through the Quad alliance (Australia, India, Japan, and the U.S.). These mechanisms blind the Western public to the realities of China.

GT: During China’s reform and opening up period, the country has been open to learning from Western societies. This has greatly boosted China’s development. Do you think there can be such an ideological emancipation in the West to take China’s political system seriously?

Prashad: One hopes that clarity will come to the Western public, who are–as yet–guided by a political class that is doing the work for sectors of the economy that are threatened by Chinese scientific and technological developments. In the short run, no such positive evaluation is possible. It is more likely for such an evaluation to come in the countries of Africa, Latin America, and southern Asia, where people will understand the immense power of the abolition of extreme poverty and the immense power of the creation of an indigenous high-tech industry. Under Lula, Brazil abolished hunger through the Fome Zero programme, while the Left Democratic Front-led Indian state Kerala has recently embarked on a poverty eradication programme. These areas of the world can better appreciate the strides taken by the Chinese people than those who live in the West. 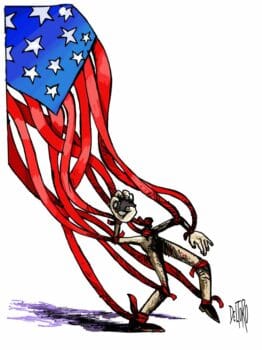 GT: Since Biden took office, his administration has spared no effort to rope in like-minded democracies to contain China, attempting to replicate the rivalry between the two blocs led by the U.S. and the Soviet Union during the Cold War. Do you think the democratic card is an effective way for the U.S. to rally an anti-China camp?

Prashad: The idea of a community of democracies has a farcical edge to it because this new group is being put together to use all manners of force (diplomatic, economic, military, etc.) to pressure China and Russia to reverse their advances. A truly democratic group should abide by the UN Charter, which is exactly what the kind of sanctions policies enacted by the Western countries defies. That is why 18 countries have created the Group of Friends in Defence of the UN Charter. This is an important development, since it suggests that the point is to stand by the Charter and not to speak in the name of an abstract democracy that often means that a country must be subordinate to Western interests. The world does not wish to be divided into camps.

The Non-Aligned Movement (NAM) will be 60 years old this September. The appetite in the developing world remains for the NAM project. Countries do not want to pick sides in a ‘new cold war’ that no-one, apart from the U.S., wants. The divide is not between China and the U.S., a division that the U.S. is trying to impose on the world: the divide is between humanity and imperialism.

GT: Your book Washington Bullets lists the assassinations and infiltrations of the U.S. CIA in various places. U.S. imperialism has been resisted on a global scale. How do you see the fate of U.S. imperialism?

Prashad: The U.S. remains a very powerful country, with the largest military force that is capable of action anywhere on the planet and with forms of soft power (such as cultural and diplomatic power) that are enviable. Despite the terrible record of U.S. interference in the developing world–which I document in Washington Bullets (2020)–the U.S. retains a powerful hold on the world’s imagination. There remains a view–however wrong it is–that the U.S. operates its power in a benevolent manner and that it acts in the universal, and not nationalist, interest. The cultural power of the U.S. is considerable, which is why the U.S. is so easily able to wield the weapons of information against any adversary.

Roughly 30 years ago, Cuba’s Fidel Castro urged countries around the world not to neglect the battle of ideas. U.S. imperialism is not eternal. It is being confronted now by the growth of multipolarity and regionalism. These are the key developments that cannot be stopped by the U.S. military or by cultural power. Multipolarity and regionalism are the real movement of history. They will eventually prevail.

The art in this newsletter comes from the Let Cuba Live exhibition by Tricontinental: Institute for Social Research, launched on the anniversary of the 26 July Movement’s founding in Cuba as peace-loving people across the world rally around the demand for an end to the U.S. blockade.