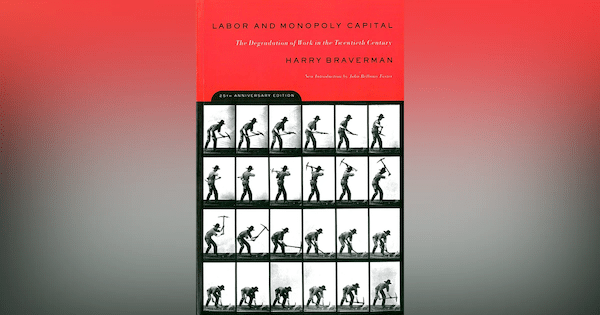 Labor and Monopoly Capital: The Degradation of Work in the Twentieth Century. by Harry Braverman. Published by: Monthly Review Press

Writing his 1974 book Labour and Monopoly Capital: The Degradation of Work in the Twentieth Century, U.S. Marxist and political economist Harry Braverman noted that Karl Marx had demonstrated that processes of production are constantly transformed by the driving force of capital accumulation. These transformations manifest themselves in the changes in the application of science and technology to production and their effect on labour processes in each branch of industry, as well as in the redistribution of labour among occupations and industries.

Marx’s analysis contrasted with the dominant industrial and sociological views of the 1960s and 1970s, which saw changes in work and occupations as largely benign. According to these, automation would remove heavy and tedious labour. Increasing demand for educational qualifications supposedly reflected the growth of skilled labour and white-collar occupations. New personnel policies seemed to reflect concern for workers’ wellbeing. More widely, academic sociology and conservative political ideologies saw the growth of white-collar workers as increasing the weight of the middle class, thereby reducing the viability of socialism. This belief was reflected by variants of socialist thought that saw revolutionary agency as moving from the working class in the most advanced industrial economies to the Global South, the peasantry and dispossessed.

For Braverman, the ascendency of this bourgeois view of work was largely a result of Marxists having added little to Marx’s work since his death, despite continuous and significant changes in the nature of the economy. There was simply “no continuing body of work in the Marxist tradition dealing with the capitalist mode of production in the manner that Marx treated it in the first volume of Capital”. Indeed, outside of the relatively few readers of all three volumes of Marx’s Capital, there was little knowledge of Marx’s contribution in the theorisation of workplace reorganisation and its effects on class relations. Thankfully, there has been an increase of academic interest in Marx’s ideas in this area since the Braverman’s “rediscovery of the labour process”. However, Marxist contributions to the subject have been overshadowed by theorists seeking to undermine Marx’s and Braverman’s understanding of changes in work and their effect on class relations and accumulation strategies.

Braverman challenged bourgeois characterisations of the capitalist labour process. He admitted that major changes in the organisation of production, in particular the growth of commercial, administrative and technical labour, “seemed to cut across Marx’s bipolar class structure and introduce a complicating element.” However, he also insisted that the adoption of Fordist production techniques, and Taylorism as a mode of work organisation, was spreading to more and more sections of the economy. Much “white-collar” labour was subject to exactly the same developments as “manual” work; to varying degrees, white-collar employees were becoming workers. Braverman contested descriptions of workforces as increasingly skilled, detailing employers’ tendencies to increase control of workers’ labour through scientific advances that separated the conception and planning of work from its execution—in short, deskilling. He also explained the continued relevance of capital’s utilisation of the reserve army of labour.

The impact of Braverman’s book was rapid and profound, reframing sociological views about work and challenging dominant academic orientations. Braverman’s influence has subsequently waned, though not due to outmoded insights, but rather because conjunctural factors have forced a retreat from class-based analyses in general. These factors included the collapse of the Soviet Union, which was said to foreclose any possibility of alternatives to capitalism, as well as the rise of neoliberalism in the 1980s and the popularisation of post-modernism. All of these developments reflected and deepened the loss of confidence in working-class organisation. However, as E P Thompson stressed, class is a relationship. Though overt mass resistance retreated (notwithstanding events such as the 1984-5 Miners’ Strike), the “other side” of the capital-labour relationship, spearheaded by the state, went on the offensive. This was, in Ralph Miliband’s terms, “class struggle from above”. The result was the enactment of anti-trade union legislation, which remains intact today, and assaults on the welfare state and living standards.