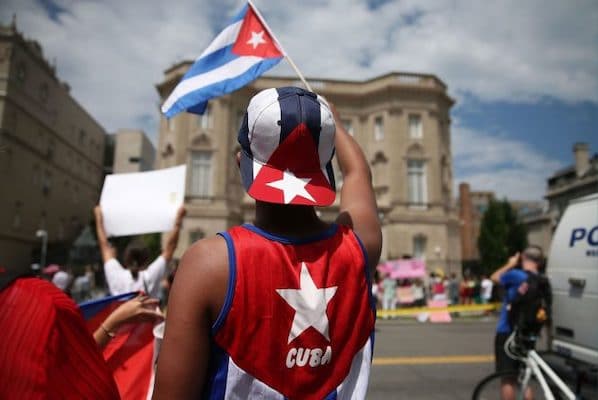 A Cuban supporter waves a Cuban flag in front of the country’s embassy after it re-opened for the first time in 54 years, July 20, 2015, in Washington, D.C. MARK WILSON / GETTY IMAGES

Today with the height of imperial arrogance and hubris, the U.S. State Department issued a joint statement to further its plans to destroy Cuba and all the gains it has made in health, education and welfare. Lining up 20 spineless, neo liberal countries beholden to them and led by right wing governments including; Austria, Brazil, Colombia, Croatia, Cyprus, Czech Republic, Ecuador, Estonia, Guatemala, Greece, Honduras, Israel, Latvia, Lithuania, Kosovo, Montenegro, North Macedonia, Poland, Republic of Korea, and Ukraine to sign on to the statement that read in part, “we condemn the mass arrests and detentions of protestors in Cuba and call on the government to respect the universal rights and freedoms of the Cuban people, including the free flow of information to all Cubans….. On July 11, tens of thousands of Cuban citizens participated in peaceful demonstrations across the country to protest deteriorating living conditions and to demand change. They exercised universal freedoms of expression and assembly, rights enshrined in the Universal Declaration of Human Rights…”

That is rich coming from the country that holds the biggest responsibility for the shortages and hardships in Cuba with its draconian economic blockade on a people that never threatened or attacked them for over 60 years. Exaggeration of the number of people protesting against the Cuban government on July 11 seems to grow by the day in social media along with nonexistent deaths with zero proof like providing names. If you wondered where those millions of dollars in grants that USAID and NED gives out with the sole purpose of undermining the Cuban government went to, well here is a good example; bombarding social media to sew confusion and creating twitter accounts of people that don’t exist, all to fan discontent around the difficult austerity that Cuba has been forced to endure through little fault of their own.

The U.S. is in no position to preach to any country about human rights or deteriorating living conditions. All you have to do is go to just any U.S. city and look in the streets and under the highways where there are millions living in their cars or in tents or in nothing at all, epidemic here nonexistent in Cuba and as the federal moratorium on evictions comes to an end at the U.S. this month there will be tens of thousands more thrown out  scrambling to find some help in the few, underfunded, disconnected patchwork of social programs. Millions in the U.S. have no medical coverage while in Cuba health care is free for everyone no matter how costly the procedure.

Violations of human rights? Consider the violence that peaceful protestors regularly meet in the streets of the U.S. facing the latest military grade weapons, police attacks with tear gas, rubber bullets and much more. The protestors in Cuba faced nothing even close to that on June 11. What about the human rights abuses in U.S. war prisons from Abu Ghraib to Guantanamo?  And aren’t the drone bombings of thousands of civilian deaths in countries in the Middle East and Africa, accelerated by Obama, don’t they constitute supreme human rights violations?

Every country has laws and Cuba does too and they have every right to apply their laws to people who break them as they see fit. According to Cuban media many of those arrested on July 11 have been released and others will stand trial. Who is the U.S. to talk about incarceration when they have more people locked up (disproportionately people of color) per capita than any country in the world? This is the kind of thing that the U.S. excels at. Being a member in good standing in the community of nations, helping each other out, it is not.