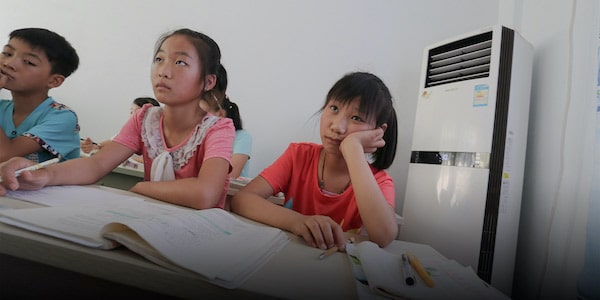 After years of largely unchecked growth, China’s private tutoring industry has at last found itself firmly in the government’s crosshairs. Last month, authorities at both the central and local levels moved to rein tutoring companies in and set limits on extracurricular learning, sending the share prices of some of the country’s biggest and best-known private training institutes plummeting by over 50%. As of July 23, the market value of the country’s top three tutoring firms–New Oriental, TAL Education Group, and GaoTu Techedu–had shrunk by over 109 billion yuan ($17 billion).

The proximate cause of the crash was the release of the “Opinions on Further Reducing the Burden of Compulsory Education Students’ Homework and Off-Campus Training.” Better known as the “double reduction” policy, it put the full weight of the central government behind regulating tutoring and training schools, including banning off-campus training institutions from raising funds and halting approvals for new institutions that provide training in core curriculum subjects.

China’s so-called shadow education industry of training schools, tutors, and extracurricular classes has long been a target of public and official criticism. In particular, it has drawn fire for its tendency to use false and exaggerated advertising to play on parental anxieties and for fueling the supposed “involution” of Chinese education.

Training schools for young children were rare in China prior to the turn of the millennium, when the industry primarily consisted of college students tutoring primary and middle school students who were having difficulty keeping up with their classes. Over the past decade, however, parents stopped seeing tutoring as a means of catching up and started seeing it as a way to optimize their children’s test scores. In my research, I found that students at the top of their class were more likely to participate in the shadow education industry than their less accomplished peers, seeing it as a chance to solidify their academic advantages. 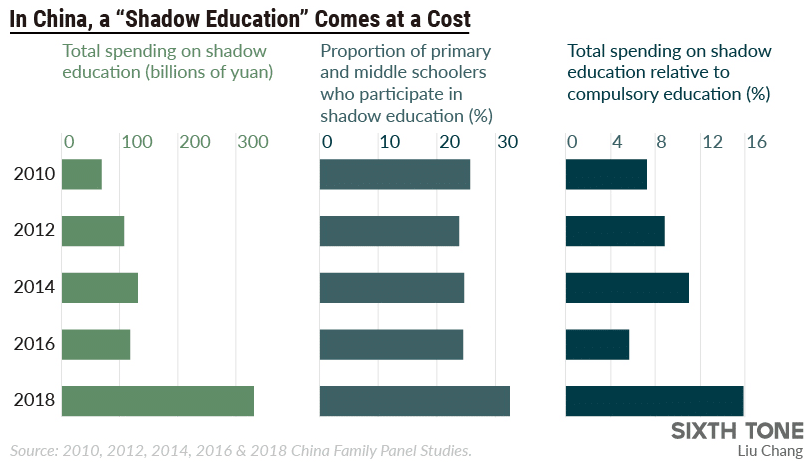 This competitive system has fueled the rapid expansion of for-profit training schools over the past five years. The average amount spent on extracurricular tutoring per student doubled between 2016 and 2018, to nearly 5,000 yuan. That year, families of primary and middle school students spent a total of 330.4 billion yuan on extracurricular classes.

From a cultural perspective, the popularity of shadow education in China can be partly explained by the deep influence of Confucianism and the importance families attach to schooling as a means of improving their social standing. Parents are willing to do their utmost to improve the educational prospects of their children, even if that means spending huge sums on tutoring. Yet it’s also a very modern phenomenon and a product of the country’s family planning policies, which limited the number of children families could have and increased the degree of importance each individual child contributes to the family’s future success.

As children have supplanted elders as the focal point of a family, parents are increasingly willing to invest whatever it takes to boost their kids’ academic prospects. This is at odds with the general trend of Chinese education policy over the past decade, which has focused on attempting to reduce academic burdens and equalize access to educational resources. But the country’s rigidly hierarchical tertiary education system has been left relatively untouched, causing the competition between families to spill off-campus, with wealthy parents paying to give their kids a leg up on college admissions and keep them from falling out of the still highly precarious middle class.

Shadow education has thus become a key mechanism for maintaining and reinforcing social classes. What’s more, their business and teaching practices have started to negatively impact the formal education system. In contrast to formal schools, which have sought to slow down learning and lower academic burdens, private training institutions frequently jump ahead of and cover areas not on the formal syllabus.

They also structure their courses around exams, looking to mechanically train students in exam knowledge and test-taking skills–a tendency that only reinforces and exacerbates the problems of the country’s test-oriented education system. The result is a generation of “test-taking machines” for whom formal school is an afterthought, but afternoons and evenings packed with rigorous and exhausting courses are a given.

Teachers, too, have been drawn into the industry. Many training schools hire public school teachers to work part-time for handsome salaries, and some teachers now put more effort into their after-school classes than their full-time jobs. Others go further, by not teaching important material during the school day, and instead implying that students should sign up for paid after-school classes if they want to learn it.

All of this represents a serious setback in China’s drive to improve educational equality, further widening the gaps between urban and rural areas, and within these areas, between students with the money to participate in the shadow education sector and those without. Even for families with resources, the high fees charged by training schools represent a significant source of economic pressure. At a time when China is trying to make childbearing more appealing, the system was an obvious target for reform.

However, there are still issues left to be resolved amid the current crackdown. In particular, the policy adopts a “supply side” approach, attempting to strangle the industry at the source. But even if the tutoring industry is brought under control, competition over scarce educational resources means the demand for tutoring services from students and parents will remain unchanged. This could result in some off-campus training institutions skirting the rules–by going underground to provide one-on-one private tutoring, or by marketing their services for non-core subject classes, then teaching core curriculum materials anyway.

Ultimately, ending China’s shadow education craze will require a broader societal shift away from winner-take-all educational competition and toward more diversified and personalized education models that can meet the needs of all students and parents.