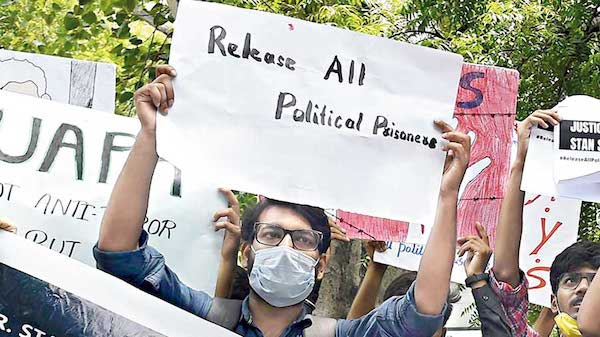 The Unlawful Activities (Prevention) Act is a blot on the nation. In no nation reputed to be civilized is there a law that allows the State to pick up literally anybody and keep the person in jail for years, without trial and without bail; and, if, at the end of the trial, whenever it occurs, the person is found innocent, then there is no question of the State being obliged to pay any compensation for the lost years in the person’s life. But this is exactly what the UAPA does.

Even the British colonial government did not arrogate to itself such sweeping powers. True, it had the infamous sedition law, but the person charged under it was at least given a swift trial, not incarcerated for years awaiting it. The leaders of the freedom struggle went to jail many times and spent altogether many years in jail; but on each occasion, they never spent more than about three years in jail. Mahatma Gandhi’s longest period of incarceration was in the early 1920s: he was arrested on March 10, 1922 and sentenced to six years of imprisonment but was released on February 5, 1924, after a year and eleven months. (His jail term during the Quit India movement was even shorter). Jawaharlal Nehru’s longest period of incarceration was during the Quit India movement when he spent 1,041 days, or two years and ten months, in the Ahmednagar Fort. By contrast, some Bhima-Koregaon accused under the UAPA have already spent more than three years in jail and most others will reach the three-year mark later this month. The charges against them have not been framed, let alone their trial starting, even as the courts keep denying them bail. Meanwhile, an internationally-reputed firm, Arsenal, has conclusively established that files used as evidence against them had been planted in their computers long before their arrests.

True, the revolutionaries engaged in armed struggle against colonial rule spent much longer periods in jail. But even as prominent a revolutionary as Ganesh Ghosh, who spent 14 years in the Andaman Cellular jail for participating in the Chittagong armoury raid (he joined the communist party after being released), had to spend less than two years between his arrest and the end of his trial. The practice of keeping people in jail for years without trial was uncommon even during colonial rule.

We find that exactly the same holds true elsewhere in the world. Let us leave aside more recent times when the sanctity of individual freedom is widely accepted; let us go back to pre-war Germany. The accused for the Reichstag fire in 1933 which gave the Nazis the excuse to change the nature of the German State and suppress the communist party whose handiwork the fire was alleged to have been spent no more than seven months between being arrested and facing trial. Three of the four accused were released as innocent at the end of the trial; one of them, Georgi Dimitrov (later to become president of the Communist International), who acted as his own lawyer, was even allowed to call Reichsminister Hermann Goering to the witness box and cross-examine him. (Imagine one of the Bhima-Koregaon accused being allowed to cross examine the home minister, Amit Shah, in today’s India!) That was what Germany was like when Hitler became chancellor; it was to change later, of course, but then Hitler had no pretensions of being democratic and was keen to establish a fascist State which is not India’s avowed objective.

The problem with the UAPA is that it completely inverts the basic principles of jurisprudence accepted in any democratic society. In most criminal cases, bail is granted as a matter of course unless there are overriding concerns relating to public interest, such as the possibility of the bailed accused tampering with evidence or putting pressure on witnesses. This is summed up in the adage, ‘bail is the rule and jail the exception’. But under the UAPA, bail is given only if there are reasonable grounds for believing that the accused is innocent. This means that even before the trial the court has to make a decision on the person’s innocence, which contradicts the basic principle that unless convicted at the end of the trial, an accused must be presumed innocent.

Likewise, leaving aside the question of arrest and bail, the amendment to the UAPA enacted in July 2019 permits the State to declare not just an organization, as was the case earlier, but even an individual a terrorist. It also allows the National Investigating Agency to attach that person’s property without any reference to the police of the state government. If that individual is to escape the stigma of being labelled a terrorist, then it is incumbent on that person to prove his or her innocence; and this has to be done when all his or her property has possibly been attached by the NIA. It is not the State that has to prove the guilt of the person it has declared a terrorist, but the accused who has to prove innocence. This, again, represents an inversion of the basic principles of democratic jurisprudence.

All this is in addition to the well-known fact that the definition of ‘terrorism’ under UAPA includes not just terrorist acts but even the propagation of ideas and views that supposedly have the potential to cause disaffection among the people. This can cover all views for bringing about a change in society away from the status quo. The UAPA, in short, can be used against all dissenting opinion, all critical thinking, all ideas that seek to carry India’s democratic revolution forward. It forces society into acquiescing to a status quo marked by the legacy of millennia of institutionalized inequality and oppression (or, worse still, in putting the clock back in the name of returning to some mythical glorious past); and anyone daring to speak out against this can be jailed for years without bail or trial.

Some may argue that the incarceration for long periods of those held under UAPA is the fault not of the law but of our over-burdened courts. But this argument lacks validity. First, because any legislation must keep in mind its practical consequences given the constraints of the system; and, second, because official agencies find numerous ways of delaying any UAPA case from coming to trial. For instance, the chargesheet in the Bhima-Koregaon case was originally in Marathi; when several of the accused professed their ignorance of Marathi, the chargesheet had to be translated, which took considerable time. When it was finally translated, since it ran into thousands of pages, the Maharashtra police gave the accused pen drives containing the chargesheet; but the accused, with no access to computers in jail, had no means of perusing it. The trial judge therefore asked the police to give print-outs of the chargesheet but the police pleaded the lack of funds for printing and photocopying. When the judge persisted, the police said that special sanction had to be obtained from the government for the purpose. And so it goes on, while the accused, among the most sensitive and thoughtful people in contemporary India, are kept languishing in jail on dubious charges. The UAPA is a blot on the nation that must be removed at the earliest.