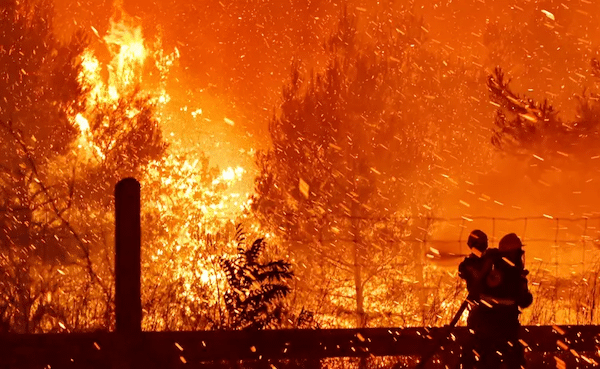 Firefighters try to put out a fire as flames spread over a highway on August 5, 2021 in northern Athens, Greece. (Photo: Milos Bicanski/Getty Images)

A panel of leading scientists convened by the United Nations issued a comprehensive report Monday that contains a stark warning for humanity: The climate crisis is here, some of its most destructive consequences are now inevitable, and only massive and speedy reductions in greenhouse gas emissions can limit the coming disaster.

Assembled by the Intergovernmental Panel on Climate Change (IPCC)—a team of more than 200 scientists—the new report represents a sweeping analysis of thousands of studies published over the past eight years as people the world over have suffered record-shattering temperatures and deadly extreme weather, from catastrophic wildfires to monsoon rains to extreme drought.

The result of the scientists’ work is a startling assessment of the extent to which human activity, particularly the burning of fossil fuels, has altered the climate, producing “unprecedented” planetary warming, glacial melting, sea level rise, and other changes that are wreaking havoc in every region of the globe—wiping out entire towns, imperiling biodiverse ecosystems such as the Great Barrier Reef and the Amazon rainforest, and endangering densely populated swaths of the world.

“This report is a reality check,” said Valérie Masson-Delmotte, a climate scientist at the University of Paris-Saclay and co-chair of the panel that produced the report.

We now have a much clearer picture of the past, present, and future climate, which is essential for understanding where we are headed, what can be done, and how we can prepare.

One central finding of the new analysis is that the Paris accord’s goal of limiting global temperature rise to no more than 1.5°C above pre-industrial levels is in serious danger as policymakers fail to take the necessary steps to curb greenhouse gas emissions.

Each of the past four decades, according to the report, has been successively warmer than any preceding decade dating back to 1850, atmospheric CO2 has soared to levels not seen in two million years, and “global surface temperature will continue to increase until at least the mid-century under all emissions scenarios considered.”

“Global warming of 1.5°C and 2°C will be exceeded during the 21st century,” the IPCC panel warns, “unless deep reductions in carbon dioxide and other greenhouse gas emissions occur in the coming decades.”

“However,” the report emphasizes, “strong and sustained reductions in emissions of carbon dioxide and other greenhouse gases would limit climate change. While benefits for air quality would come quickly, it could take 20-30 years to see global temperatures stabilize.”

Panmao Zhai, another co-chair of the IPCC working group, stressed that “stabilizing the climate will require strong, rapid, and sustained reductions in greenhouse gas emissions, and reaching net-zero CO2 emissions.”

“Limiting other greenhouse gases and air pollutants, especially methane, could have benefits both for health and the climate,” Zhai added. 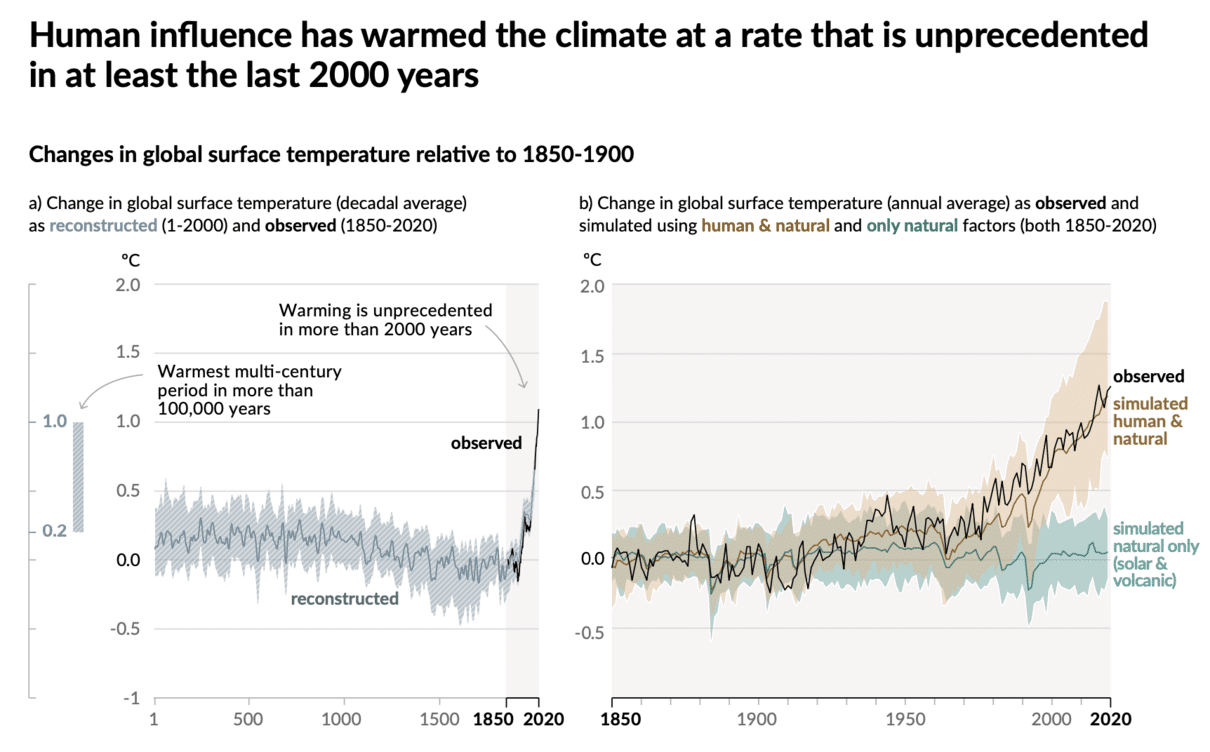 The new report, the first of three installments, was released just weeks before world leaders are set to gather in Glasgow for the 2021 United Nations Climate Change Conference (COP26), which activists view as a pivotal moment for the global climate fight.

“Many see COP26 as our last, best chance to prevent global temperatures from spiraling out of control,” Dorothy Grace Guerrero of Global Justice Now wrote last month. “Unfortunately, we are not yet on track to limit global warming to 1.5°C, the threshold that scientists agree will prevent the most dangerous climate impacts. Failure to reach this goal will take a disproportionate toll on developing countries.”

António Guterres, secretary-general of the U.N., said in a statement Monday that the IPCC’s latest findings are “a code red for humanity.”

“The alarm bells are deafening, and the evidence is irrefutable: greenhouse gas emissions from fossil fuel burning and deforestation are choking our planet and putting billions of people at immediate risk,” said Guterres.

Global heating is affecting every region on Earth, with many of the changes becoming irreversible.

“There is a clear moral and economic imperative to protect the lives and livelihoods of those on the front lines of the climate crisis,” Guterres continued.

If we combine forces now, we can avert climate catastrophe. But, as today’s report makes clear, there is no time for delay and no room for excuses. I count on government leaders and all stakeholders to ensure COP26 is a success.

This post has been updated with the IPCC’s proper name.