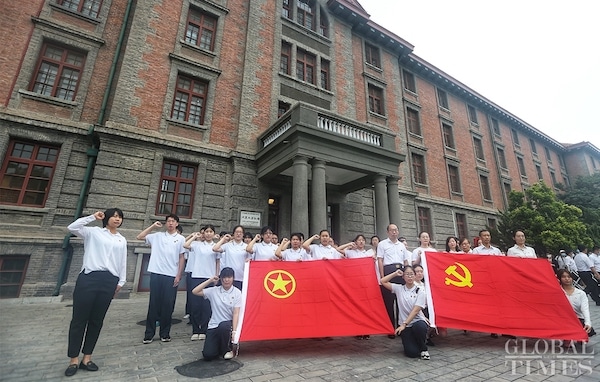 “How a Western ideology like Marxism can take roots and grow in an Eastern country and make the second largest economy even more prosperous than the Western country where it originated? There must be scientific and magical answers,” This is how 18-year-old Wang Yijin interprets her ambitions in studying Marxism. Wang made national headlines in July for grabbing an offer of Marxism studies at China’s prestigious Peking University (PKU) after giving up an offer of full scholarship from Hong Kong University.

Wang is a typical Chinese youngster propelled by a strong interest in Marxism studies in recent years, inspired with confidence in this ideology that has made China the second largest economy thanks to its strong economic vitality while the West is stuck in frequent economic crises.

Many of them are deeply aware of how Western ideologies advocating liberalism have lost their charm and hegemony after failing to deal with the pandemic and economic recovery.

Analysts say that the new generations of Chinese youths have been inspired to find alternatives to Western development in a more rational, scientific and practical way, especially after feeling frustrated under capitalism.

Marxism grabs the hearts of youths

The enthusiasm of China’s younger generations to explore Marxism has increased markedly in recent years, noted Wang Chuanli, professor at the School of Marxism of Tsinghua University, adding that getting admitted on a doctoral program in Marxist theory at Tsinghua is growingly competitive, as “the number of applicants has kept rising in the latest couple of years.”

Furthermore, Tsinghua started enrolling undergraduate students majoring in Marxist theory this year in a response to the interests among young applicants, Wang added.

Similarly, PKU, China’s first institution to open Marxist studies in 1992, launched a popular program in 2008 called “Dazhao Class” to commemorate one of the founding figures of the Communist Party of China (CPC), Li Dazhao. With the program is aimed at cultivating more talents in the area of Marxist theoretical research, Wang Yijin became the first admitted undergraduate student for this class extended to the Bachelor level in 2021.

Wang told the Global Times that she hopes to understand why creative Marxism can make China a more powerful country and draw a clearer path for China’s future with innovative practices in next decades.

“Very thoughtful and rational with good analytical and speaking skills,” Wang defined herself as a qualified candidate for Marxist studies in a China’s top university.

Far away from the “politically indifferent younger Chinese generations” portrayed in biased Western media stories, Wang’s keen interest in politics gave her determination to make the difficult decision to give up an offer from Hong Kong University of a HK$684,000 full scholarship to major in law or economics, a seemingly more lucrative choice.

She participated in the Model United Nations and closely follows remarks from the Chinese Foreign Ministry spokespersons. She tried to discover the wisdom of the Chinese political system and the theory behind it.

She told the Global Times that the enthusiasm of the younger generations for Marxism is becoming a trend as many around her like to use vintage cultural products with profile pictures of Karl Marx and Vladimir Lenin and their quotes. She is spending her current summer holiday reading a biography of Marx.

Though lectures on Marxism-Leninism are common in Chinese educational curriculum, the students’ devotion goes beyond.

Online videos featuring extracts or inspiring episodes about Marxism-Leninism have become popular across domestic social media platforms, with many getting tens of thousands of likes up across Bilibili, a video-streaming platform popular among young Chinese audiences, including a typical video clip of a lecture by famous American Marxist economist Richard David Wolff.

Students enrolled in Marxist studies reached by the Global Times regarded the experience as a window for youngsters to look for an alternative system for national prosperity, after realizing how Western capitalism can frustrate people’s aspirations.

Resentments and frustrations against capitalism have been also more prevalent across many domestic social media, Chen Xin, a PhD student majoring in theoretical Marxism, pointed out that many graduates prefer to become a national civil servant instead of going to the private sector, which they described as an “involution” where people compete for limited resources with demanding busy schedules under exploitative conditions.

Chen realized that studying Marxism is better aligned with the Chinese mainstream ideology and more suitable to understand how the theory develops creatively and retains its basic principles in the country.

“It’s neither vague nor boring. It’s explaining reality,” Chen told the Global Times, noting that she hopes to become a researcher or a civil servant after graduation to put her theory into practice and fit in the national system.

“Marxism teaches a legacy of socialism, not of gravediggers. The younger generations in China should be more socially responsible than their Western counterparts who grew up with values that emphasize individualism,” Yu Heping, a master’s degree student at the School of Marxism at China University of Political Science and Law, explained his decision to enroll on this program.

“Marxism provides impetus for youths to follow dreams and makes us more confident to cope with confrontation with external ideologies,” he said, adding that “it is a matter of great pride to tie my personal destiny to the future of our country.”

Yu has similarly witnessed the growth in enrollment at the School of Marxism in his university in recent years, from 30 students in 2018 to more than 50 this year.

Compared with the elder Chinese generations, who grew up during a period of domestic political turmoil, lived through the collapse of the former Soviet Union and witnessed the tremendous change of East Europe in the 1990s, today’s young Chinese generations are much more confident in Marxism, said Wang Chuanli, the professor of Marxism.

“In the early 1990s there were some who doubted Marxism, socialism or the ruling [ability] of the CPC. But now, witnessing the country’s growing prosperity under the guidance of Marxism and the Party, most young people in China no longer have such doubts like their predecessors did,” said the professor.

“As Chairman Mao once said, our Party’s fighting strength would be greatly enhanced if it had one or two hundred comrades who had learned Marxism systematically,” Wang noted.

“Now we are going to have tens of thousands of young people who believe in and learn Marxism,” he said, adding that “they speak good English, have international perspective, and are good at thinking. They confirm the correctness of Marxism through their own observations, comparing China with the West.”

A contribution to such wave of enthusiasm was the recent celebration of the centenary of the founding of the CPC, advocating for a fresh understanding of socialism and Marxism in a new era, with rich pop culture products and drama series focusing on relevant histories.

Chinese TV drama Awakening Age, which narrates the story of how the CPC was founded in 1921, has become popular among young people such as Wang, the professor.

The CPC took the Communist Manifesto written by Marx and Friedrich Engels as a fundamental guidance and source of many policies of the CPC when it was created in 1919.

“So far China has successfully achieved the first centenary goal. The second centenary goal, as well as the building of a modern socialist country, will be the mission and stage of our generation,” said Wang.