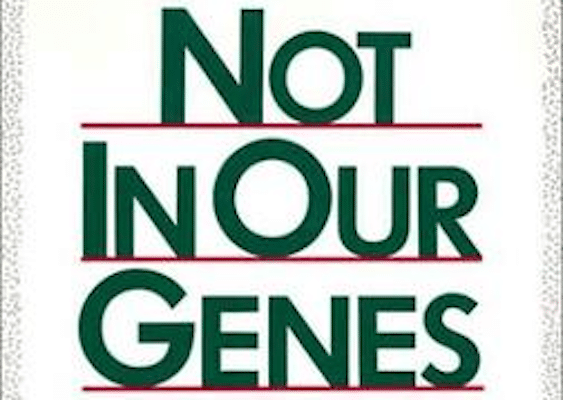 Cover of the first edition

A Collage of Reflections

It was New Year, 1970. We were in Hanoi during a brief bombing pause, with the intention of helping expose the effects of the new weaponry—notably the chemical sprays—that the U.S. was using. Hilary [Rose], a sociologist, was interviewing refugees from the south who were being treated for the effects of the sprays; I, a neuroscientist, was hoping to collect samples for analysis. (Hilary’s research was published in Science—the first acceptance in the U.S. that the sprays were toxic to humans as well as plants). In Hanoi, we met Dick Levins as part of a World Federation of Scientific Workers delegation—a meeting which became the start of a life-long transatlantic friendship. So, when later in 1970 Dick Lewontin was on sabbatical at Sussex, it was natural that he should look us up.

In the US, the various chapters of Science for Vietnam were morphing into Science for the People; in the UK, we were building its close cousin, the rather ponderously named British Society for Social Responsibility in Science. We learned how Levins and Lewontin were attempting to develop a non-hierarchical collective lab practice involving the entire group of students, postdocs, and technicians. This project later became one of the factors behind the painful breach between the two Dicks and hence between their two previously close families. Roughly speaking, it was a difference in focus between process and product, with Levins endlessly patient with seemingly interminable discussions, and Lewontin in more of a hurry to reach decisions. My own utopian attempt at group lab and political practice at the Open University ran into similar problems, and we all learned rather painfully what we should have known from the start—that you can’t build socialism in one laboratory, or abolish hierarchy within the university when some are tenured grant holders while others are in precarity and financially dependent on the tenured grant holders.

You can’t build socialism in one laboratory . . .

On both sides of the Atlantic, as reflected in many articles in Science for the People, political activism was intertwined with debate. If science was not neutral but reflected and refracted the society within which it was embedded, would a socialist science be different from science under capitalism? And, as feminist voices began to insist, how would a feminist science differ from today’s intensely masculinist science? When in the mid-seventies Hilary and I began to put together an international collection of essays on radical science, we suggested to Levins and Lewontin that they reflect on an earlier failed but much misunderstood experiment: the disastrous Lysenko episode in the Soviet Union. The result—still, I think, one of the most illuminating analytical accounts of the affair—was published in our book The Radicalisation of Science (1976) and later in their book The Dialectical Biologist (1985).1 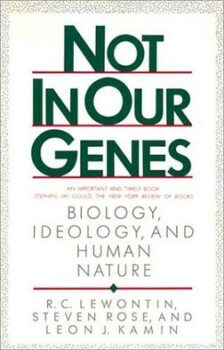 Cover of the first edition

By the mid-seventies two closely related controversies were fiercely dividing both the scientific and wider social world. The first was the resurgence of scientific racism with its claims of genetically determined differences in IQ between whites and Blacks in the US, initiated by Arthur Jensen and his claim that the Head Start program, intended to bridge the performance gap between Black and white children, was a genetically inevitable failure. The second was the publishing and popular success of Ed Wilson’s Sociobiology (1975) and Richard Dawkins’ The Selfish Gene (1976), with their genetically determinist messages. The UK-based publisher Penguin approached Dick for a response. In turn Dick asked the psychologist Leo Kamin, who had already written a devastating critique of the research on the genetics of IQ, and me if we would join him in this venture. The result was Not in Our Genes (1984).2 The book is of its time, and as some otherwise sympathetic feminists remarked, written in a robustly masculinist polemical style. Dick was well known for not taking prisoners when debating, even when critiquing patriarchy. For contrast, think of Sandra Harding’s, Ruth Hubbard’s, or Hilary Rose’s critiques and explorations of what a feminist science might look like.

Dick and I worked closely on the book during my sabbatical at the Museum of Comparative Zoology and over periods in Dick and Mary Jane’s Vermont hideaway and at our Yorkshire farmhouse. Dick had not yet developed his fear of flying, but he found the steep drive down from the moor to Ilkley and the farm somewhat scary. What did impress him when he twisted his ankle was the speed, efficiency, and lack of bureaucracy in the hospital where the National Health Service treated him free of charge—even for the X-rays. (But that was then; now the cash starved, COVID-exhausted NHS is rapidly being privatized and sold off to big U.S. companies). Leo Kamin contributed at a distance, though Dick and I once trekked up from Vermont to his summer home, a converted railway carriage in Maine. It was Mary Jane who gave the book its title—I had a T-shirt printed with Not in Our Genes on my way up to Vermont one time and she posed skittishly in it.

Dick was well known for not taking prisoners when debating . . .

We saw each other less frequently after the book. Dick was not a great correspondent, and our last intellectual engagement came in 2006 when he asked me to contribute a commentary to a tenth anniversary reprint of his classic paper, “The Analysis of Variance and the Analysis of Causes.” I demurred, claiming that as a neuroscientist I thought it would be a bit presumptuous, but was finally persuaded and rewarded with a typically brief email: “so you did understand it!”3

For me, Dick’s legacy is above all a way of thinking about living processes, a way that like Levins, with whom he honed these insights, I call dialectical. That life is a process, not a thing; that organism and environment interpenetrate; that organisms actively choose and transform their environments; that complex systems cannot be reduced to and explained by their component parts, even though they depend on them; that we cannot understand the present without understanding the paths by which that present has arrived. As uncle Karl said, we make our own history, though in circumstances not of our own choosing.

What It Means To Be a Radical Scientist

My roommates told me that the big news at Harvard when I arrived as a first-year graduate student was that Harvard had just hired Richard Lewontin from Chicago. I met Lewontin himself shortly after that. A group that called itself Harvard SDS, with a dubious relation to the more famous historic organization of that name, decided that the Vietnam War was essentially over and that the movement’s task was now to address scientific racism—especially the claim that differences in the living conditions of racial groups could largely be traced to genetics, specifically to differences in intelligence as measured by IQ. The most prominent formulation of this claim was an article in The Atlantic by Harvard psychologist Richard Herrnstein, and Harvard SDS invited Lewontin to explain what was wrong with the article.

Lewontin’s talk was a master class in dialectical biology, and it was a revelation. In the space of half an hour, I acquired one fundamental piece of knowledge—that the variation is greater within human groups than between them, thus discrediting “race” as a meaningful scientific notion—and two lessons that have stuck with me ever since—that the meaning of statistical findings (in this case the claim that intelligence was eighty percent inherited) can be distorted; and that concepts are not scientific just because credentialed scientists talk about them.

I thought it might be amusing to review [the book] entirely through artfully arranged quotations, producing a kind of autophagous destruction, but then I decided it was not worth the considerable effort required to copy out all the passages.

That talk brought me another important lesson: that it was possible to be a radical scientist, and that it could be entertaining! In Lewontin’s many talks and writings on genetics and on the misuse of science, he did not suffer fools gladly but he demolished them gleefully. A selection from his classic review in Configurations of Higher Superstition by Gross and Levitt, billed by its authors as a defense of science against the “academic left,” gives a hint of his devastating rhetorical power:

What suicidal impulse must have possessed Paul Gross and Norman Levitt when they produced, as the first line for their book, “Muddleheadedness has always been the sovereign force in human affairs”? While reading the book I thought it might be amusing to review it entirely through artfully arranged quotations from it, producing a kind of autophagous destruction, but then I decided it was not worth the considerable effort required to copy out all the passages.4

Our movement needs more writers who can express their combativeness with such elegance.

During my years living in Boston I got to know Lewontin slightly, through Science for the People and through my friendship with one of his sons. But I can say without hesitation that no one more strongly influenced my image of what it means to be a radical scientist; and it was all there in that first encounter.

Pedagogy of the Two Richards

Richard (Dick) Lewontin had a superpower—one shared by his long-time collaborator Richard (Dick) Levins, but by few other august academics. He listened to and learned from younger people.

We first met both Richards in 1982 when we were newly-arrived in Cambridge. Paul Sweezy had tasked us with pulling together a special issue on Marxism, Science and Medicine for Monthly Review. That assignment was well beyond our competence; we’d made a start on understanding health care, and had dabbled in Marxism; but aside from reading Science for the People, we knew little about the politics of science.

We sought Lewontin’s guidance but he refused to guide, offering instead to collaborate in convening an editorial group for the task. In frequent meetings over the next eighteen months, that group solicited and helped shape manuscripts. Lewontin’s and Levins’s contributions arrived fully and beautifully formed, but most others required considerable reshaping.

The meetings were so delightful that, once the task at hand was complete, we kept meeting semi-regularly for the next twenty-five years or so to discuss science, medicine, and politics—a sort of floating crap game with somewhat shifting membership. When the arrival of new participants mandated a round of introductions, most of us puffed up our credentials. The two Richards’s usual self identification: “I teach biology.” 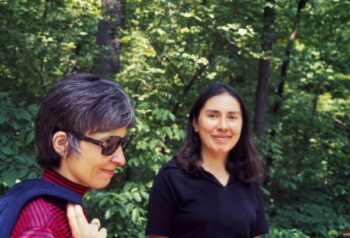 In our discussions, rather than dominating the floor as is the norm for senior academics at Harvard, Lewontin often hung back listening. When he spoke, instead of grandiloquent pronouncements, he usually offered concise remarks built upon (usually extending) others’ contributions (“precision is increasing but accuracy is deteriorating”), or spun off new ideas.

Beyond our meetings, we grew to appreciate some broader contours of Dick’s life. Mary Jane, his partner since high school, was not publicly celebrated but provided the essential foundation for Dick’s work and life. Asked if she was his high school sweetheart, Dick replied: “She still is.” Mary Jane was every bit Dick’s equal in gatherings at their homes in Cambridge and in Vermont. (Dick built the Vermont retreat himself except for the pond, which was created by a local excavating contractor, who presented Dick with a bill for “the destruction of a natural wetlands”). Their four children, who inherited Dick’s confidence that they could understand and create just about anything, helped teach Dick about radical politics and cared for him in his last years.

We miss you, Dick.