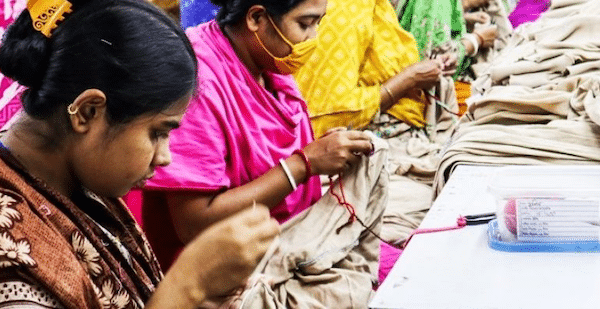 The multilateral trading system anchored by the WTO is not confined to cross-border trade in physical goods. It was also designed to protect corporate knowledge monopolies. ‘Free trade’, according to the WTO, would enhance developing countries’ productive capacity through technology transfer and upskilling. The COVID-19 crisis tells a different story. The global distribution of patent-protected knowledge is highly skewed along the North/South axis reflected in the geography of vaccine production and vaccination rates. About 85% percent of vaccinations to date have been in wealthier countries, where Covid death rates have dropped dramatically. But at the current rhythm, it will take decades for people in low-income countries to be fully vaccinated.

Two things are essential to close the gap and accelerate mass vaccination: full utilization of existing capacity and expanded vaccine production in developing countries. This requires loosening the vaccine makers’ grip on the monopoly of knowledge and technology embodied in their manufacture: the companies’ intellectual property rights (IPR). This knowledge is embodied in patents and other forms of intellectual property which allow their owners to determine who benefits from the product, at what price and when.

When governments funded vaccine development, they invested the vaccine makers with exclusive rights to their production, pricing and distribution. Limited supplies sustain a sellers’ market in which, for example, Pfizer’s price of US$19.50 per dose brings a profit margin estimated at 60% to 80%.

Intellectual property, the WTO and TRIPS

The global rules governing IPR are set out in the WTO Agreement on Trade-Related Intellectual Property Rights (TRIPS). TRIPS requires all member states ‘to make patents available for any inventions, whether products or processes, in all fields of technology without discrimination’, and sets 20 years as the minimum period for patent protection. For the life of the patent, the owner retains the right to manufacture, distribute and import the product. It also provides specific protection for copyrights, trademarks, industrial designs, ‘undisclosed information’ (generally known as trade secrets) and test data (such as the results of clinical vaccine trials).

Prior to TRIPS, enforcement of these rights was patchy and difficult outside national jurisdictions. Some countries provided no protection for pharmaceuticals. Others, such as India, protected pharmaceutical production processes but not the products themselves, making it possible to reverse engineer a product to produce low-cost generics.

The General Agreement on Tariffs and Trade (GATT) had been the venue for reducing tariffs and quotas. In the late 1970s, U.S. multinationals in pharmaceuticals, software and media organized and lobbied to bring IPR protection into new model trade agreements. Countries hosting real or imagined competitors were threatened with loss of market access and disciplined through unilateral action. Bilateral agreements were negotiated to strengthen U.S. companies’ IPR, followed by the North American Free Trade Agreement (NAFTA) amongst the US, Canada and Mexico. Europe and Japan were brought on board.

TRIPS was unanimously adopted at the conclusion of the GATT final round and came into effect in 1995 with the birth of the WTO. TRIPS was flanked by another of the WTO’s foundational treaties, the Agreement on Trade-Related Investment Measures (TRIMS). TRIMS essentially eliminated restrictions on profit repatriation and curtailed measures to promote local content and technology transfer – essential for the development of national industrial policies, such as, for example, the development of national pharmaceutical industries. Countries such as Brazil and India developed their pharmaceutical industries before the introduction of binding global IPR rules. TRIPS and TRIMS erected barriers to that development path.

Intellectual property rights decisively shaped the evolution of the pharmaceutical industry and its value chain. Through their control of patents, the companies built a global footprint and defended their home markets through monopoly pricing and by limiting supply. These were vertically-integrated manufacturing companies which maintained in-house research and clinical trial departments. In the 1970s they increasingly turned to outsourcing, contracting out R&D, testing and manufacturing. The widening value chain intensified the need for stricter IPR to prevent knowledge from leaking.[1]

In 1980, the U.S. passed legislation authorizing small businesses and universities to patent inventions developed with public funding. Previously these had automatically reverted to the government, which licensed them to generic manufacturers, or were injected directly into the public domain. Universities and startups were now integrated into a corporate-driven knowledge complex. Other countries followed suit, in law or in practice. This is how the ‘Oxford Vaccine’ quickly became the ‘AstraZeneca vaccine’, whose development was 97% funded by public authorities and non-profit organisations.

At the same time, the companies increasingly financialized, reducing expenditure on production capacity, employees and even R&D to free up cash to distribute to shareholders as dividends and share buybacks. Buybacks boost executive compensation, whose primary component is share options. Between 2006 and 2015, the 18 largest U.S. pharmaceutical companies distributed 99% of their profits to shareholders, half of it as buybacks. During this period, Pfizer returned US$139 billion to shareholders while spending US$82 billion on R&D.  European companies followed suit, while arguing, like their U.S. counterparts, that high drug prices were needed to sustain ‘innovation’.

Financialized pharmaceutical companies manage operations as a bundle of financial rather than physical assets. Their greatest financial asset is the patents which generate 80% of their profits; competition drives a struggle for patent ‘blockbusters’. The ultimate blockbuster is a prescription drug, taken daily for the life of the patient, heavily marketed in a country where regulatory authorities have little capacity to negotiate on price – like the United States, by far the world’s largest pharmaceutical market. Pfizer’s cholesterol-reducing Lipitor, the all-time bestselling prescription medication, brought in US$125 billion over the life of the patent.

This explains the vanishingly low level of corporate interest in, for example, treatments for tropical diseases and tuberculosis, major killers which primarily afflict the poor.

The pharmaceutical industry is an efficient financial machine for generating income streams to investors through monopoly pricing, strict control over supplies and narrowly focused research. But the industry’s patent-driven business model cannot meet the needs arising from a global health emergency. Governments hold the key to unlocking production.

In 1997, South Africa modified its patent law to facilitate access to cheaper generic treatments for HIV/Aids. The following year, 39 mostly multinational drug companies sued the government to force it to drop a law which, the lawsuit alleged, ‘deprives owners of intellectual property in respect of pharmaceutical products’. The U.S. and the European Commission supported the lawsuit. Organized resistance forced the companies to drop the suit and governments to withdraw their support for it.

Following this successful struggle for access to life-saving medicines, the TRIPS rules were ‘clarified’ in 2001 to specify the conditions under which governments facing a ‘national health emergency’ could issue compulsory licenses to manufacture without the approval of the rights holders.

The pandemic by definition is global. And intellectual property rules also protect diagnostics, treatments and personal protective equipment, all of them in short supply. This is why 62 countries, led by India and South Africa, have proposed that the WTO waive member states’ obligations under the TRIPS applying to all products needed for the prevention, containment and treatment of COVID-19. The Biden administration has expressed support for a waiver on vaccines (only), but the proposal remains blocked at the WTO despite the support of two-thirds of the member states. This is not entirely the work of corporate lobbyists, though they are busy. It is a widespread article of faith that IPR must never be breached.

COVAX, governments’ and companies’ preferred vehicle for distributing vaccines to lower income countries, is essentially a philanthropic public-private partnership which leaves intact the companies’ IPR and power over production, pricing and destination. It has failed to deliver. According to its website, as of July 19, 2021, only some 129 million vaccine doses had been shipped.

In May 2020, in response to a call for global solidarity led by Costa Rica, the United Nations’ World Health Organization (WHO) launched the COVID-19 Technology Access Pool (C-TAP) to boost the supply of COVID-19 diagnostics, treatments, vaccines and other products by sharing intellectual property through non-exclusive licensing agreements with qualified manufacturers. Unsurprisingly, not a single company has signed up, but it has member state support. Housed within the United Nations’ system, C-TAP could bring unused capacity online and channel investment and technology to developing countries to boost wider manufacturing. For this to happen, one, or a group of countries, home to companies with critical Covid-related IPR would have to come on board. They need to be pushed.

The primary obstacles to expanded vaccine production are political: corporate power and IPR fundamentalism. Access to medicines is recognized as an essential element of the human right to health. Unions have backed the call for a TRIPS waiver. Organized action at all levels will determine which will prevail: human rights or intellectual property rights.

Peter Rossman was the Director of Campaigns and Communication for the International Union of Food, Agricultural, Hotel, Restaurant, Catering, Tobacco and Allied Workers’ Associations (IUF) from 1991 until retirement in 2020. A full version of this paper is featured in the GLU online course ‘Regulating Global Supply Chains to Empower Workers’.

[1] On 21 July this year Pfizer announced that it would be producing vaccines together with South Africa’s Biovac for distribution to African countries. But, the New York Times reported, ‘The South African producer, Biovac, will only be handling distribution and “fill-finish”–the final phase of the manufacturing process, during which the vaccine is placed in vials and packaged for shipping (Robbins, 2021). It will rely on Pfizer facilities in Europe to make the vaccine substance and ship it to its Cape Town facility.’ This is the system of global IPR-based rent extraction pioneered by The Coca-Cola Company. Coke makes the concentrate, licensed bottlers do the ‘fill-finish’.

Robbins, R. (2021) ‘Pfizer will turn to a plant in Africa to help supply the continent with vaccines next year.’ New York Times, 21 July.