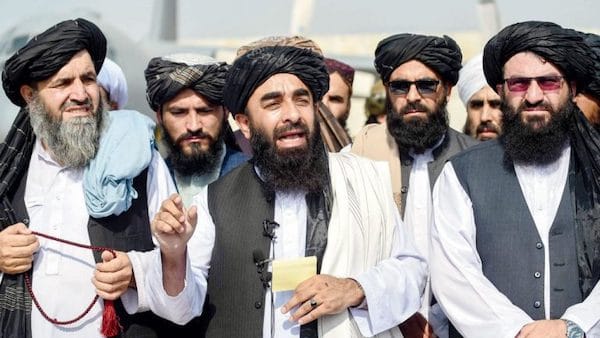 At the weekly briefing in Moscow on Thursday by the Foreign Ministry spokesperson Maria Zakharova stated that Russia will consider recognising Afghanistan’s new authorities once an inclusive government is formed in the country.

To quote Zakharova, “We call for the establishment of an inclusive coalition government in Afghanistan that would involve all of the country’s ethnic and political forces, including ethnic minorities, so the question of recognising the country’s authorities will rise after the process is over.” (TASS)

It is a high probability that the Taliban-led government will indeed be an inclusive coalition government. An announcement in this regard is expected in Kabul, according to some reports, as early as on Friday.

Zakharova’s remark is forward-looking and seems to reflect the latest Russian thinking. Only recently, Russian Special Presidential Envoy for Afghanistan Zamir Kabulov, had remarked that there is no way the Taliban can be removed from the list of terrorists before a decision by the UN Security Council. “As for recognition, we are in no rush. We will see how the regime acts,” he said.

Indeed, Moscow’s stance on the question of recognition of the new Afghan government is vital for its stability. It is abundantly clear by now that the U.S. will do whatever it takes to ensure that the new government does not gain traction. The Pentagon is gearing up to wreak vengeance on the Taliban for the humiliating defeat in the war. As to whether there is any possibility for the U.S. to coordinate with the Taliban in the fight against ISIS-K, Defence Secretary Lloyd Austin was evasive, whereas common sense would dictate that the Taliban is an existential enemy of the ISIS-K.

What it implies is that the U.S. intends first to cripple the Afghan government financially through sanctions, freezing of assets, denial of access to international banking, etc., and then bypass it and proceed to do pretty much what it wants to do with scant regard for Afghanistan’s sovereignty and territorial integrity. An analysis by the Brookings Institution on Tuesday was titled, “Will the Taliban regime survive?”

The analysis discusses that “the group’s (Taliban’s) challenge of maintaining cohesiveness across its many different factions of varied ideological intensity and material interests is tougher now that it is in power.

“The factions have disparate views about how the new regime should rule across just about all dimensions of governance: inclusiveness, dealing with foreign fighters, the economy, and external relations. Many middle-level battlefield commanders–younger, more plugged into global jihadi networks, and without personal experience of the Taliban’s mismanaged 1990s rule–are more hardline than key older national and provincial leaders.” read more

Quite obviously, U.S. intelligence has made deep ingresses into the Taliban and has gained the capability to splinter it, weaken it and subdue it, when the crunch time comes. Suffice to say, Taliban will not have an easy time ahead. Washington’s interest lies in creating a “stateless” situation in the country without a functioning central government so that it can intervene at will and pursue its geopolitical objectives aimed at the regional countries.

The unspoken agenda here is to start a hybrid war where the ISIS fighters airlifted by the U.S. from Syria and transferred to Afghanistan, with battle-hardened veterans from Central Asia, Xinjiang, North Caucasus, etc. operating in the regions surrounding Afghanistan.

Russia seems to realise the grave implications of the unfolding U.S. strategy. Ambassador Vassily Nebenzia was spot on in questioning the mala fide intentions behind the U.S. and its allies rushing through the UN Security Council on Monday the Resolution 2593 (2021) on Afghanistan.

The time for ambivalence is gone. The survival of the Taliban-led coalition government will critically depend on international support. The main determinant of policy for the regional states, therefore, should be whether a stable government in Kabul is in their vital interests or not.

Afghanistan today is so hopelessly fragmented politically and the U.S. has systematically undermined and weakened the Northern Alliance to clear the pathway for its puppet government in Kabul that the Taliban government is literally the last train leaving the station. If it collapses, the unity of Afghanistan is in peril. It will be carved into fiefdoms by warlords, like Somalia or Yemen and will turn into a permanent source of regional stability and terrorism. Is that what responsible regional states like India want in their immediate neighbourhood?

The answer is very clear. The U.S.’ “homeland security” will not be affected if Afghanistan descends into total chaos. But the regional states are stakeholders one way or another and there is no exception here–Central Asian states, China, Russia, Iran, Pakistan and India are all sailing in the same boat.

The self-interests of each of the regional states would lie in strengthening the new Afghan government and help it vanquish the ISIS-K and other terror groups that have mushroomed during the period of U.S. occupation. Therefore, recognition of the new government in Kabul by the regional states is a vital necessity.

There is imperative need to ensure that the Taliban fulfils its commitment to crack down on terrorist groups operating on Afghan soil. The regional states cannot and should not outsource their task ahead to Washington. In the name of international solidarity, the U.S. is actually orchestrating the isolation of Afghanistan as a “Pariah state”, to borrow the pet expression of state  secretary Blinken.

If the U.S. ploy succeeds, regional states will pay a heavy price, as its logical outcome will be the ascendancy of the Islamic State in Afghanistan. And there’s nothing like absolute security. Afghanistan’s security and stability is inextricably linked to the regional security and stability. Hence the imperative need to remain constructively engaged with the Taliban government, and help it to consolidate quickly so as to  leverage its policies and encourage them to move in a positive direction.