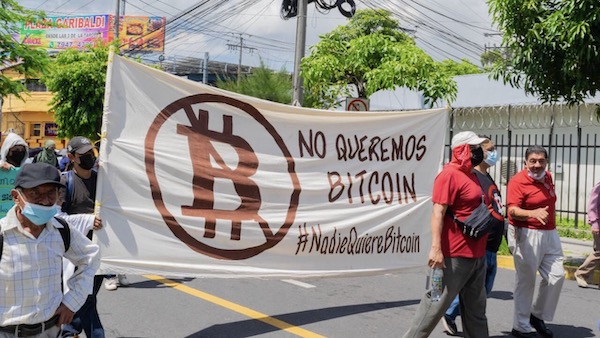 Hundreds of Salvadorans took to the streets of El Salvador’s capital on September 7, to protest the adoption of Bitcoin as national currency. Photo: Jaime Guevara

On September 7, El Salvador became the first country in the world to recognize Bitcoin as legal tender, alongside the U.S. dollar. The same day, hundreds of Salvadorans took to the streets of the capital San Salvador to protest the adoption of the highly speculative digital currency as national currency. They marched from the central square to the Legislative Assembly to express their dissatisfaction with the decision of the far-right government of President Nayib Bukele. The members and legislators of the opposition left-wing Farabundo Martí National Liberation Front party (FMLN) also joined the march.

The protesters rejected the government’s resolution, arguing that it creates uncertainty and does not benefit the majority of the population. Several protesters condemned that it is not suitable for small vendors and only benefits the big investors and transnational companies. Many said that they fear that the volatility of the cryptocurrency will affect their income and purchasing power. Others expressed that they are afraid that soon the electronic currency will become the only currency, recalling how quickly the Salvadoran colón was replaced by the U.S. dollar in 2001 under the prevailing law on monetary integration.

The Popular Resistance and Rebellion Bloc, a platform that brings together 32 social organizations, movements and unions and has been at the forefront of the recent wave of anti-Bitcoin demonstrations, stated that the measure “hit the working class, the peasantry and rural communities the most.” The bloc also highlighted that the majority of the population lack technological tools and high-end telephones to download and operate the government-backed electronic wallet app, known as Chivo. The organization also alleged that the electronic currency could cause an increase corruption and poverty in the country.

Many economists warned that the digital currency’s lack of transparency could attract increased criminal activity to the country and make it a haven of money laundering as it does not record the identity of those who handle it.

Despite knowing the numerous risks and drawbacks involved, Bukele’s neoliberal administration proceeded with the plan amid widespread popular rejection. Ahead of the launch, the impoverished and indebted Central American country bought 400 Bitcoins worth about 20 million USD. The same day it was legalized, the country suffered huge losses as the price of Bitcoin crashed to its lowest in nearly a month, falling from 52,000 USD to under 43,000 USD.

The opposition forces and the civil society organizations condemned the hasty implementation of the measure, which caused one of the poorest countries in Latin America to lose around 3 million USD in one day.

The Bitcoin law was approved by the parliament, controlled by Bukele’s party and its allies, last June. Bukele’s administration asked the Congress to approve the use of over 200 million USD for implementing the cryptocurrency as legal tender, 150 million USD for a fund to guarantee the “automatic and instantaneous convertibility” of Bitcoin to USD and vice versa,  including installation of Bitcoin ATMs through which people will be able to convert their digital tokens into cash, and another 200 million USD to provide citizens with a “bonus” to encourage them to use an electronic wallet. For this purpose, Bukele’s government announced that it would use the 600 million USD from a loan granted by the Central American Development Bank (CABEI) for the Trust for the Economic Recovery of Salvadoran Companies (Firempresa).

It instantly attracted extensive criticism. Workers across sectors, university students, and transportation workers rejected the decision. According to an opinion poll, conducted by the Francisco Gavidia University’s Citizen Studies Center in August, 77.5% of the Salvadoran population considered that the adoption of the Bitcoin as a legal tender was not a wise decision.

Besides the Bitcoin law, Salvadorans also mobilized in rejection of a recent ruling by the Supreme Court, which opened doors to the re-election of the current authoritarian president Bukele. Last week, on September 3, the country’s highest court ruled that a president can now serve two consecutive terms. It is important to note that all the five justices of the Supreme Court were appointed by the ruling NI-GANA alliance in May after the previous justices were removed, a step that drew strong national and international criticism.

The protesters also demonstrated against another legislative measure that obligates judges to retire at the age of 60 or when they complete 30 years of service through a reform of the Judicial Career Law. The measure came into effect on September 7 and forced a third of the country’s judges to retire. Civil society organizations denounced the dismissal of judges as an open violation of judicial independence. The judges joined the demonstration demanding the annulment of the reforms to the Judicial Career Law as well as the reinstatement of the Supreme Court justices dismissed in May.

on the same day as bitcoin rolls out, the El Salvador judiciary protests. A third of the country's judges are being forcibly retired. the president says it's to clean house. critics say it's part of a power grab – taking hold of the country's institutions.#Bitcoin #BitcoinDay pic.twitter.com/HApxh4GRbO