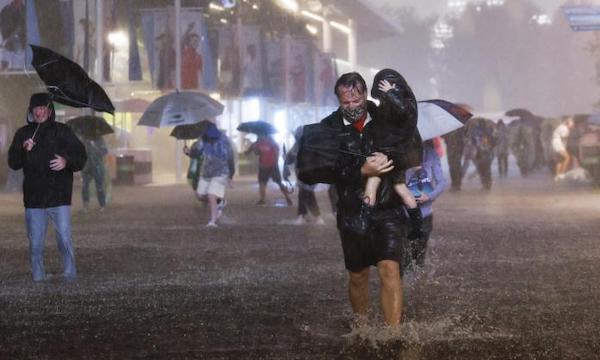 The climate crisis is raging across the Northern Hemisphere. Fires stretch from Algeria and Spain to Palestine, from Siberia to Ontario. Floods have killed hundreds in China and India and displaced thousands more. Three of the biggest countries in the world—Russia, the U.S. and Canada—have been blanketed with smoke. So too, for the first time ever, was the north pole.

There is no doubt among scientists that the increasing frequency of extreme weather and associated disasters like fires is a result of climate change. Despite the dip in CO2 emissions in mid-2020 due to the COVID-19 pandemic, concentrations of greenhouse gases in the atmosphere still rose to their highest level ever—and 2021 is set to break that record again. The global average temperature has increased by 1.1 degrees Celsius already, and the effects are being felt.

This is most obvious in the record high temperatures. July was the world’s hottest month ever. Temperature records were smashed in numerous countries around the world. In Canada, the small town of Lytton in British Columbia had a high of 49.6 degrees on 29 June—smashing the previous Canadian record of 45 degrees, recorded in 1937. Less than a week later, the town was consumed by a massive wildfire. The heatwave in Canada also caused an estimated one billion sea creatures to be boiled alive.

In Europe, the town of Syracuse on the Italian island of Sicily hit 48.8 degrees on 11 August, beating the previous European record of 48 degrees, set in Athens in 1977.

The increasing heat speeds up evaporation and reduces average rainfall in many parts of the world, making drought more common and more severe. As in Australia in 2019-20, this has created tinderbox conditions that make wildfires burn out of control. This is a worldwide problem, with devastating fires in places as geographically distant and environmentally dissimilar as Lebanon and Siberia.

The problem is exacerbated by the chronic underfunding of firefighting services. The US, for instance, relies on temporary firefighters, who are paid as little as US$13.45 an hour and work twelve-hour days with few breaks or days off. Ordinary people pay the price. Towns like Lytton are left to burn, and in other cases, for example on the Greek island of Evia, poorly equipped and untrained local residents are forced to battle the flames on their own.

The situation in Russia is particularly troubling. Fires have burnt through vast areas of forest that sit on top of permafrost. Russian authorities didn’t even try to fight them: regulations don’t require it if the cost of fighting the fire is more than the value of the forest destroyed. The cold logic of capitalism means millions of hectares of land have been incinerated (and vast quantities of carbon released into the atmosphere—further contributing to climate change), because it can’t be exploited for profit.

Rising temperatures aren’t only contributing to more extreme droughts and fires. Warmer air can absorb more water, which means that, when rain does fall, it can be more intense. In mid-August Zhengzhou, in China’s Henan province, had a year’s worth of rain in just three days. At the peak of the downpour, 202 millimetres—equivalent to over a third of Melbourne’s annual average rainfall—fell in just one hour. The resulting floods killed more than 300 people across the region. Many drowned after being trapped by water flowing into the subway. Hundreds of thousands of people had to be evacuated from their homes.

Extreme rainfall and flooding also hit Germany, India, Japan and parts of the US. India had its worst monsoon in decades, while floods in Japan forced 1.4 million people to evacuate their homes and triggered landslides that killed 23 people in a single town. In the US state of Tennessee, a series of severe thunderstorms dumped 431 millimetres of rain in only a few hours. Twenty-two people were killed and many more are missing. Most recently, on the night of 1 September, New York was drenched by a record 70 millimetres of rain in an hour as the remnants of Hurricane Ida swept past—with some among the dozens killed drowning after being trapped by water rushing into their basement apartments.

These are just the most obvious effects of climate change. There are also signs that we may be passing tipping points that scientists think may accelerate the climate crisis.

One explanation that has been proposed for the increased severity of both heatwaves and floods is the disruption of the Arctic jet stream. The jet stream is a feature of our climate that (mostly) keeps cold air over the north pole and warm air further south, while at the same time keeping those weather systems in motion. When it slows, as some scientists believe is happening with increasing frequency, more hot air gets north—hence the heatwaves in Canada and Siberia—and more cold air gets south—hence an extreme cold snap in Texas in February.

Even worse, it means that weather systems get trapped in place. Instead of a heatwave lasting a few days, it can last for weeks. Conditions under such “heat domes” become almost unlivable. In the North American heatwave in June, hospitals were overrun, rains that could have controlled fires never came, and the heat just kept rising. The Dixie fire, which started on 13 July and is still burning today, is the largest single fire in California’s history. Canada has had fires burning continuously since April. Practically the whole Mediterranean was aflame in early August because of such a stationary heat dome.

In the past, firefighters have relied on the off season to recover. But as the Washington Post’s climate and science reporter Sarah Kaplan put it, “now there is no offseason; one fire year simply bleeds into the next, as winter rain and snow is delayed and diminished by climate change”.

Catastrophic as this is, it is only the beginning. Every fraction of a degree of warming will invite more, and greater, disasters. A 2020 study published in the U.S. journal Proceedings of the National Academy of Sciences found the chance of a tropical storm developing into a category three or above hurricane has increased 8 percent per decade over the past 40 years. That’s in a period in which the global average temperature has risen by just 1 degree. Another study, published in Science Advances in 2017, found—based on an examination of heatwave deaths in India between 1960 and 2009—that warming of just half a degree resulted in a 150 percent increase in the number of heatwaves that kill 100 or more people.

At the world’s current rate of warming, a 1.5 degree increase on the pre-industrial era average is unavoidable, and if there are not rapid cuts to emissions from now, we can expect 3-4 degrees of warming by the end of the century. This is a future we should do everything in our power to avoid. And we can’t trust the global capitalist class and their political servants to make the changes we need. Workers and the poor—the people who are suffering the most from the effects of climate change—must wage the fight ourselves.

We are not just victims, we are the solution. In the “bushfire summer” of 2019-20 tens of thousands of Australians protested—calling for Prime Minister Scott Morrison to be sacked for his refusal to take the climate crisis seriously. Iran is in the grip of a massive strike wave and social rebellion motivated in part by water shortages. Protests in Greece against the government’s handling of the fires there are part of the broader movement against austerity that has increased the suffering of ordinary people.

The climate crisis is driving people not just to fear and sorrow, but to rage. There lies our best hope—working-class revolution to use the vast productive power of society, not for the profits of the few, but for the sake of humanity and the planet we depend on.