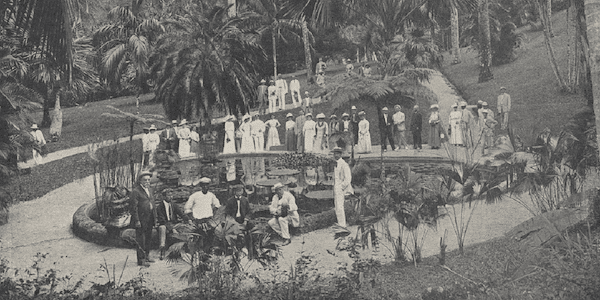 A United Fruit Company promotional for a plantation in Jamaica. Credit: Boston Webster

Last year’s war in Nagorno-Karabakh was devastating. In September 2020, a decades-long ethnic and territorial dispute between neighbouring Caucus countries Armenia and Azerbaijan re-erupted. After an eventual Azeri victory, with thousands of deaths and displacements, there has been some reflection of the tragedy of the conflict.

One particular moment of the war stood out for its strangeness. At the height of the conflict, the official Azerbaijani Instagram account of Burger King posted pro-Azeri propaganda, boldly stating ‘Victory is with you, Azerbaijani Soldier!’ and that ‘Karabakh is Azerbaijan’. McDonald’s too claimed that ‘Every inch of the homeland is one and indivisible’–while showing a map of Azerbaijan encompassing the whole of the disputed Nagorno-Karabakh region.

Though seemingly outlandish, brands taking sides in warfare has historical precedence. War is a miserable business, but it is a business in itself. In the Global North, the biggest and best-known brands flex their ‘responsible credentials’ by taking sides in social disputes. More intimate involvement in actual wars though, such as in Nagorno-Karabakh, have ranged from producing propaganda in support of one combatant country to playing both sides of a conflict to make money off shared misery.

Wars have been fought on behalf of corporate interests for years. The East India Company pioneered imperial plunder in South Asia on behalf of the British state. It occupied parts of modern India in the late 1700s and early 1800s, using its own private army to protect its interests, and eventually moving to administer whole regions as a governing power.

After the brutal successes of the Industrial Revolution, the British upper classes began to grow accustomed to foreign luxuries like Chinese tea. To deliver increasing quantities of the precious leaves, the East India Company gave incentives to ramp up opium production in the Indian territories they controlled, paying private merchants to illegally trade the drug for tea with their Chinese counterparts. Fostering a dependency on opium in China, the company threw the balance of trade off so badly that the Chinese government eventually demanded opium stock be destroyed to halt its ruinous impact on their economy and the populace. Thus began the Opium Wars of the mid-1800s, a series of clashes born out of early capitalist influence. This ravaging of natural resources and local populations was an integral part of colonial policy, and private companies were its vanguard.

Another starker example from the twentieth century are the ‘Banana Wars’, a series of conflicts which saw American troops sent into Central America to protect access to profitable food plantations for the companies Standard Fruit and United Fruit, now known as Chiquita. The U.S. was a growing empire in the early 1900s after the successful gains of the Spanish-American war, including Guam, Cuba and Puerto Rico. As the U.S. sought to secure corporate control of local fruit production in the area, insurrections against imperial rule became a problem. President Theodore Roosevelt issued an addition to the Monroe Doctrine known as the ‘Roosevelt Corollary’ which stated that ‘chronic wrongdoing… [may] ultimately require intervention by some civilized nation’, indicating the US’s intent to suppress dissent to protect domestic commercial interests.

The trigger point for capitalist violence in Latin America came when agricultural labourers attempted to unionise and demand labour rights. Companies like United Fruit exploited the lack of local labour laws to ensure banana production increased for export. One of the most egregious and revealing examples of anti-labour violence from this period was the 1928 ‘Banana Massacre’. Colombian United Fruit workers went on strike, demanding recognition as employees and a six-day week, amongst other rights. The U.S. government denounced the employees as ‘communists’ and pressured the Colombian authorities to punish the strikers, threatening to send in marines if their corporate interests were not protected. The Colombian government, fearing invasion, sent in troops who massacred strikers in the name of United Fruit.

Corporate and national interests were now registered as one and the same, and the vast and growing military apparatus of the United States was used to ensure workers remained compliant. From this point onwards, ‘democracy’ and capitalism were to be used interchangeably. The Banana Wars have parallels in continuing U.S. interventions in Latin American politics today: the corporate descendants of banana barons are still pushing for regime change in Latin American democracies, demonstrating once again the long impact of corporatism on the history of human conflict.

The rise of public relations in the twentieth century saw brands invest in sanitising their image and win over hearts and minds. During World War I, companies seized on nationalism as an advertising technique. British brands like Bovril played on the threat of combat, announcing that their hot drink had ‘body-building power’ particularly suited to those ‘at the Front’. The French brand Perrier went further in February 1915, challenging whether consumers wanted to ‘drink German waters’ instead.

But many companies were as interested in maintaining access to markets on the other side of the conflict as they were in boosting the home front spirit. After U.S. entry into WWII, a strict embargo was imposed on trade with the Axis powers. Coca-Cola, long-established and popular in Germany, was worried about losing access to this huge market. The corporate giant circumvented the embargo by using the existing German factories to create a new soft drink for the internal market. It was made of apple shavings, fruit pulp and whey, and was named ‘Fanta’.

For the modern world, corporate influence in conflict is perhaps one of its defining features. It is therefore fitting that in the late 1980s, Pepsico briefly had the sixth-largest military in the world, after the Soviets traded a fleet of ships and submarines for access to the sugary drink. Then there’s the arms industry itself, a bloated commercial enterprise which directly profits off human misery.

Perhaps even more alarming is that the recent Azerbaijani controversy suggests a further trend towards brands’ self-insertion in complex military, political, and often ethnic disputes in localised areas. With international corporations reliant on local franchises, regional branches are beginning to use the reach of the global brand to weigh-in on sectarian conflicts. But there is a point to be made from all this: that capitalism is loyal to capital and capital alone.

Tommy Hodgson is a writer and researcher with a particular interest in post-Soviet states and the Global South. He is also active in the radical collective Our Future Now