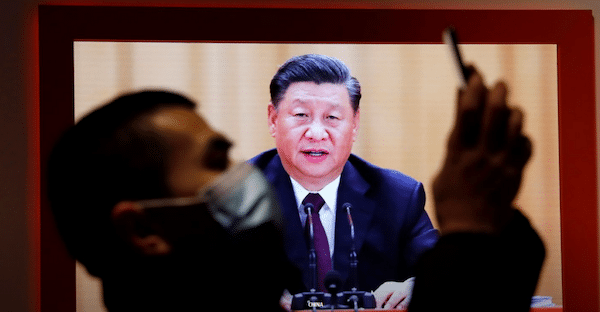 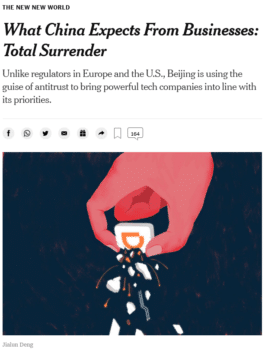 The New York Times (7/19/21) warns critics of Big Tech not to be “too impressed by how swiftly Beijing is bringing its tech titans to heel”—because China is forcing these companies to promote the government’s efforts “to reduce inequality and promote what the party calls ‘collective prosperity.’”

As part of a comprehensive economic initiative, Beijing has instituted a series of regulations—including fines, IPO suspensions, data-collection laws and other measures—for technology businesses that have raised concerns regarding power consolidation, labor rights, privacy, cybersecurity and user safety, among other issues. Offenders include ride-hailing giant Didi, the finance-tech Ant Group and multinational conglomerate Tencent Holdings Ltd.

According to major U.S. news sources, the directives are an instance of government overreach, a transgression of which China is routinely accused. Beijing has sent a “stark message” (New York Times, 7/5/21) with an “authoritarian tinge” (Bloomberg, 7/27/21). Its multi–billion–dollar corporate targets are thus “casualties” of “Beijing’s crackdown on private enterprise” (CNN Business, 9/1/21), from which the government expects “total surrender” (New York Times, 7/19/21).

These reports, curiously, arise as U.S. media and policymakers continue a protracted process of advocating for restrictions on the “Big Four” homegrown tech companies—Google, Facebook, Apple and Amazon—citing many of the categories of malfeasance associated with Chinese tech companies. (Normally, U.S. media aren’t this enthusiastic about corporate regulation; tech companies’ increasingly large share of ad revenues, which renders them a major competitor for traditional corporate-owned outlets, may help explain this stance.)

Yet no matter how much overlap there may be between each country’s regulatory posture, U.S. media maintain a double standard for corporate tech law in the U.S. and China: In the former, it’s in pursuit of democracy; in the latter, of autocracy. 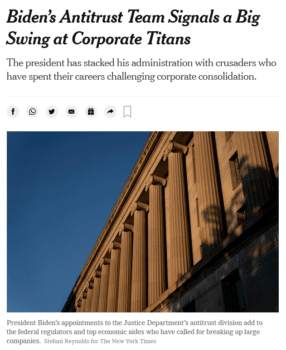 The New York Times (7/24/21) highlights the “Biden administration’s growing concern that the concentration of power in technology…has hurt consumers and workers, and stunted economic growth.”

China’s enforcement of antitrust policies was met with a markedly different reaction. By July 2021, the country’s State Administration of Market Regulation had fined a number of internet firms, including Didi, Tencent and Ant Group subsidiary Alibaba, for various antitrust violations. The New York Times (7/19/21) framed this not as a reduction of corporate power for the public interest, but as a totalitarian encroachment on corporate freedom. Beijing, it cautioned, was “using the guise of antitrust to bring powerful tech companies into line with its priorities,” demanding the private sector “surrender with absolute loyalty.”

Wired (7/29/21), too, took an admonitory tone. The “seemingly sudden crackdown,” the magazine warned, “comes amid moves by President Xi Jinping to assert more authority over every aspect of life.” Four months prior, Wired (3/9/21) had referred to Biden’s antitrust appointees as “all-stars.”

A similar dynamic appears in coverage of privacy and security legislation. By the AP’s estimate (11/27/20), Biden had the potential to “curb” the power of companies that were “endangering consumers’ privacy.” Biden was also lauded (New York Times, 4/21/21) for his recruitment of Tim Wu, an Obama administration alum and “progressive critic” of tech monopolization and data harvesting, and of Lina Khan, a “progressive trustbuster” known for her user privacy advocacy. When Biden appointed Khan to the Federal Trade Commission in June, the AP (6/17/21) welcomed the “energetic critic,” while the New Yorker (6/21/21) reveled in the “important first step.”

As privacy proponents in the U.S. government are embraced, those in China are questioned. In July, the Cyberspace Administration of China (CAC), an Internet regulator, suspended new user signups and temporarily removed the Didi app from app stores, ostensibly in response to illegal harvesting of user data. To the New York Times (7/19/21), this qualified Didi as “a target of the government’s regulatory wrath.”

The Wall Street Journal (6/12/21) reports that China’s proposed Personal Information Protection Law “seeks to limit the types of data that private-sector firms can collect”—but this is presented as “yet another move to strengthen the role of the government.”

New York Times tech critic Kara Swisher (7/20/21) conjectured that the move was meant to punish Didi for a “spectacular” initial public offering, which constituted “a terrifying government action,” one that was “shrouded in doublespeak about privacy, cybersecurity and sensitive-location information.” Compared to the United States, Swisher wrote, China’s efforts to control its tech industry are “much more troubling and malevolent.”

In the surrounding months, Beijing had been drafting the Personal Information Protection Law (PIPL), which places limits on corporate and governmental data-mining practices. The Wall Street Journal (6/12/21) characterized the law as part of a “power play,” while AP (8/20/21) described it as “tighten[ing] control.”

Both the AP and the Wall Street Journal acknowledged the user protections the law would usher in, but hedged those gains with concern that the government could still gather and monitor citizens’ data—though the Wall Street Journal (8/17/21) would later concede that “the new draft law bars government organizations from collecting data beyond what is needed to perform ‘legally prescribed duties.’” Interestingly, this surveillance-state caveat wasn’t posed in any of the above praise heaped upon the Biden administration, despite the US’s extensive, documented history of surreptitiously gathering data on its populace. 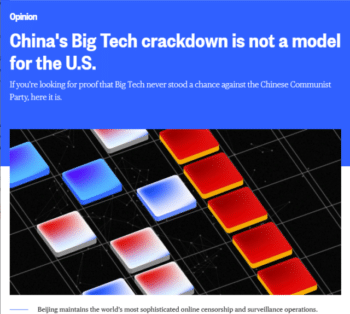 MSNBC (3/16/21) assures us that our government’s motives are pure, whereas enemy intentions are malevolent: “Washington is responding to pressure to improve transparency and accountability in the industry, Beijing’s motive is to solidify political control.”

In support of ‘too large’ companies

Lest anyone view China as a leader in tech regulation, an MSNBC opinion piece (3/16/21) insisted that Beijing was no model for Washington:

In the United States, the Biden administration is recruiting high-profile leaders in the Big Tech antitrust space, but while Washington is responding to pressure to improve transparency and accountability in the industry, Beijing’s motive is to solidify political control to ensure that no private company will grow too large or deviate from serving the political and economic goals set by the ruling Chinese Communist Party.

Yet isn’t the point of antitrust law, by definition, “to ensure that no private company will grow too large”? Who or what will enforce antitrust law, if not a government? Don’t U.S. tech companies, which regularly operate in concert with arms of the state, serve “the political and economic goals” set by the U.S. ruling class?

If U.S. journalists want to take a possible tech crackdown seriously, there should be no reason to find China’s actions so chilling. And, contrary to what media might argue, if the U.S. refuses to take cues from China’s regulatory success, it won’t be likely to achieve much of its own.

Julianne Tveten’s work has appeared in In These Times, The Nation, The New Republic, Pacifica Radio and elsewhere.