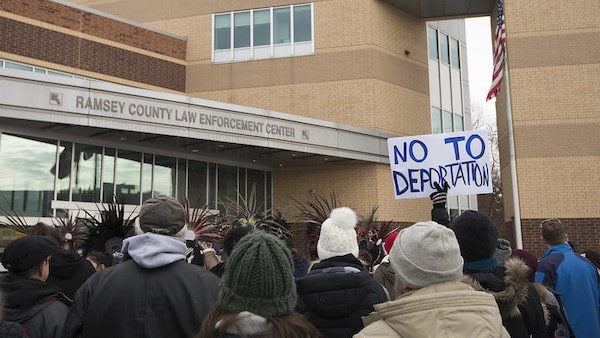 The Washington Post has a piece on the current deportation of Haitian migrants from the U.S. and how it is charged with racism.

One sentence in the piece reveals the supremacist thinking of its authors:

No one is quoted in support of that delirious claim.

It is not the task of U.S. administrations to “nurture stable Haitian governments” nor has it ever been its aim. The U.S. has in fact done the opposite for more than 100 years and everyone in the Haitian community knows that.

Today its envoy to Haiti resigned over exactly that:

A top U.S. envoy to Haiti tendered his resignation on Wednesday, citing the Biden administration’s “inhumane” effort to expel hundreds of Haitian migrants to their home country, which is recovering from a deadly earthquake and plagued by political instability, widespread insecurity and crippling poverty.Ambassador Daniel Foote, who was chosen to be the U.S. special envoy to Haiti in July, called the Biden administration’s policy in Haiti “deeply flawed,” saying his recommendations were brushed aside.

“I will not be associated with the United States[‘] inhumane, counterproductive decision to deport thousands of Haitian refugees and illegal immigrants to Haiti, a country where American officials are confined to secure compounds because of the danger posed by armed gangs in control of daily life,” Foote wrote in his resignation letter to Secretary of State Antony Blinken, which was obtained by CBS News.

Foote’s resignation letter (also here) includes some words the State Department establishment does not like to hear:

Haitians need immediate assistance to restore the government’s ability to neutralize the gangs and restore order through the national police. They need a true agreement across society and political actors, with international support, to chart a timely path to the democratic selection of their next president and parliament. They need humanitarian assistance, money to deliver COVID vaccines and so many other things.But what our Haitian friends really want, and need, is the opportunity to chart their own course, without international puppeteering and favored candidates but with genuine support for that course. I do not believe that Haiti can enjoy stability until her citizens have the dignity of truly choosing their own leaders fairly and acceptably.

Last week, the U.S. and other embassies in Port-au-Prince issued another public statement of support by for the unelected, de facto Prime Minister Dr.Ariel Henry as interim leader of Haiti, and have continued to tout his “political agreement” over another broader, earlier accord shepherded by civil society. The hubris that makes us believe we should pick the winner ‐again‐ is impressive. This cycle of international political interventions in Haiti has consistently produced catastrophic results. More negative impacts to Haiti will have calamitous consequences n o t only in Haiti, but in the U.S. and our neighbors in the hemisphere.

In a statement, State Department spokesman Ned Price pushed back sharply on Foote’s assertion that his recommendations were dismissed out of hand, saying Foote “failed to take advantage of ample opportunity to raise concerns about migration during his tenure and chose to resign instead.””For him to say his proposals were ignored is simply false. I’m not going to parse the contents of his resignation letter, but I do want to emphasize that we have active policy debates in this administration on a number of issues. The role of the President’s cabinet and his advisors is to provide the President with the best advice possible,” Price said. “No ideas are ignored, but not all ideas are good ideas.”

The Biden administration has been using Title 42, a public health authority first invoked under former President Donald Trump, to expel Haitian migrants in U.S. border custody without a court hearing or an asylum screening.

We can chalk this up as another point where Biden follows Trump on foreign policy.

To save its falling ratings the Biden administration is not only moving to a more hawkish position on immigration and foreign policies. It is also removing officials who are not hawkish enough.

The Haiti move follows a day after the Pentagon removed a to nuclear policy official because she was opposing a more aggressive nuclear weapons policy:

The Defense Department has removed a top political appointee in charge of nuclear policy from her position, prompting concern among disarmament advocates that the Pentagon is sidelining those with less hawkish views as the Biden administration develops its official policy on nuclear weapons.Top Pentagon officials asked Leonor Tomero, the deputy assistant secretary of defense for nuclear and missile defense, to resign from her post in recent days, according to people familiar with the matter, who spoke on the condition of anonymity to discuss a sensitive personnel matter.

The shake-up comes as the Biden administration hammers out the details of its Nuclear Posture Review, a document that each administration has released since the 1990s to set out its nuclear weapons policy and strategy, and which the administration is expected to release early next year.

The Arms Control Wonk is quoted with a truism:

“People wonder why we don’t learn from failures like Vietnam, Iraq and Afghanistan. The reason is simple: People who point out alternatives to current national security policies are systematically driven out of positions of authority,” said Jeffrey Lewis, a professor and nuclear weapons expert at the Middlebury Institute for International Studies. “Firing her sends a clear message to everyone in the Pentagon that there is no tolerance for new ideas when it comes to our nuclear weapons policies.”Daryl G. Kimball, executive director of the Arms Control Association, said in a tweet that Tomero’s firing was not the first time the Defense Department “deep state has ‘reorganized’ a smart, competent person who poses commonsense [questions] that challenge the nuclear status quo out of office.”

It would have been impossible to remove Leonor Tomero, a political appointee, without the approval of the White House.

Biden hopes that a move to the right will allow the Democrats to win the mid term elections. I believe that the strategy will fail.