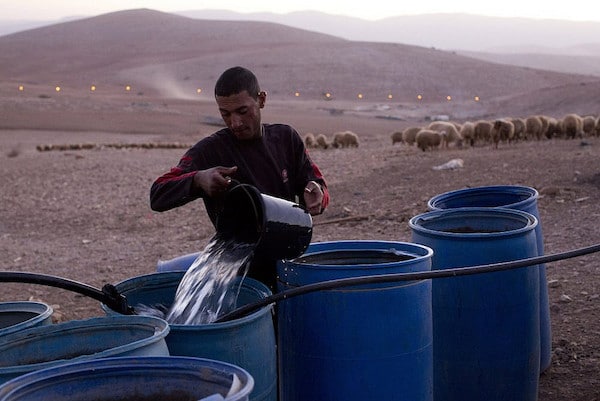 Abu Hani and his family live only two kilometers from the Israeli settlement outpost of Avigayil in the occupied South Hebron Hills. But unlike Avigayil’s residents, who are connected to Israel’s national water grid, Abu Hani and his children are barred from doing so. Not only do they not receive a drop from Mekorot, Israel’s national water company, the Israeli authorities also prohibit them from maintaining cisterns for storing rainwater, as they had been doing until Israel took over the area.

Abu Hani, like many other Palestinian breadwinners in the South Hebron Hills, is forced to travel great distances and pay exorbitant prices in order to fill up a rusty container that will provide his family with water.

He is not the only one. According to human rights group B’Tselem, Palestinians in the South Hebron Hills buy water transported by trucks that usually come from the nearby Palestinian city of Yatta, often paying more than four times the price of water for residential use in Israel. These high prices mean that Palestinians may spend as much as a third of their monthly income on water. Contrast that with Israel, where the average family spends only 1.3 percent of its monthly income on water.

Denying water to the Palestinians in the South Hebron Hills is one of many brutal methods for expelling the local population in order to take its land and hand it over to Jewish settlers.

That brutality, of course, cannot be enforced without the presence of an occupying army. I witnessed it last week when 50 Israeli activists, including members of Knesset Mossi Raz (Meretz) and Ofer Cassif (Joint List), accompanied Abu Hani and his water tanker from the village of A-Tuwani to Al-Mugafara community, where he lives.

As we were walking on the main road, an army ambulance suddenly drove past us. We politely cleared the way, but as it passed us, the ambulance stopped, blocked the road, and out poured a group of armed soldiers. Within minutes, more army jeeps arrived. 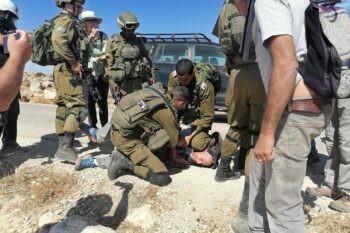 An Israeli soldier kneels on the neck of an Israeli left-wing activist during an attempt to bring water to Palestinian communities in the South Hebron Hills, April 17, 2021. (Photo: Osama Iliwat)

The soldiers attacked us, threw tear gas, and tried to stop us from delivering the water. One of the protesters was violently thrown on the ground, and wounded by an Israeli officer. Another demonstrator was knocked to the ground, after which a soldier kneeled on his neck. Six demonstrators were arrested and detained for seven hours.

As an activist in the occupied Jordan Valley for the past 15 years, I have witnessed this injustice on a daily basis. Thousands of Palestinians in the area do not have access to water in temperatures that can swell up to 40 degrees Celsius (104 degrees Fahrenheit) in the summer. Palestinian families must travel every three days through IDF live-fire zones (which sprawl over 46 percent of the Jordan Valley) to bring water in rusty containers at the price of NIS 1,700 ($530) per month.

Often the army will confiscate or destroy the containers, leaving entire families without a drop of water for long stretches of time, as they did in the hamlet of Khirbet Humsa or Ras a-Tin in the peak of July’s summer heat. Other times, if Palestinians decide to buy their water from the Palestinian Authority, the army will destroy their water pipes. 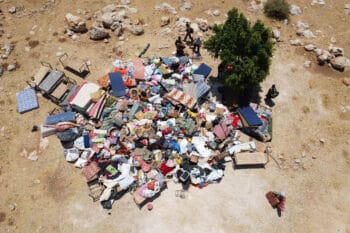 An aerial photo of the demolition of the Khirbet Humsa community in the Jordan Valley, occupied West Bank, July 8, 2021. (Photo: Oren Ziv)

The settlers themselves also take an active role in water sabotage. Over the last two years, they have cordoned off two springs in the area, blocking access to local Palestinian shepherds from watering their flocks.

Many Palestinians in the Jordan Valley who depend on agriculture install makeshift water pipes and connect to the national water grid independently. However, without a construction permit, doing so is considered “illegal” and means the Israeli authorities can demolish those pipes at any time. The Civil Administration–which runs the day-to-day affairs of the millions of Palestinians under occupation–rejects over 98 percent of Palestinian building permit requests in Area C, where both the Jordan Valley and the South Hebron Hills are located, while regularly carrying out demolitions for so-called planning and construction violations.

Water is a given for most Jewish Israelis, regardless of what side of the Green Line they live on. Palestinians in the Jordan Valley and the South Hebron Hills must struggle every day to secure every drop of water for themselves and their families. For 54 years, the Israeli authorities, through an increasingly brutal military, have been depriving Palestinians living under occupation of the right as part of its efforts to expel a native, civilian population from their land, simply because they are not from the right ethnic or religious group. This is apartheid at its worst.

Daphne Banai has been an activist in the Jordan Valley for 15 years. She is also active with MachsomWatch, Women Against the Occupation and for Human Rights. Previously, she was a management member of Sadaka-Reut, a bi-national Palestinian and Jewish youth group.