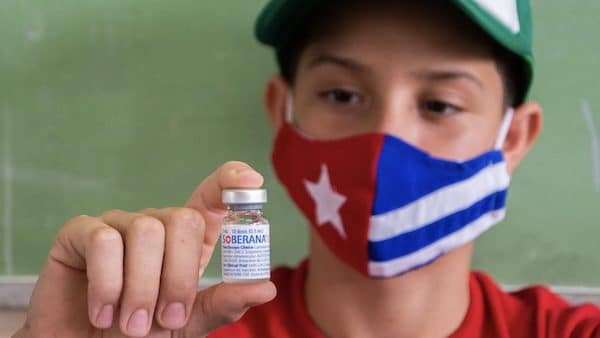 Last month, on September 6, Cuba began immunizing its pediatric population and became the first country in the world to inoculate children from the age of two. (Photo: Miguel Díaz-Canel/Twitter)

Cuba has successfully vaccinated around 60% of its population with its own vaccines despite numerous challenges due to the decades long US embargo. According to the Cuban Public Health Ministry, as of October 12, 6,500,743 Cubans have been fully vaccinated against COVID-19. The figure represents 58.1% of the entire Cuban population (11,180,000 approximately). 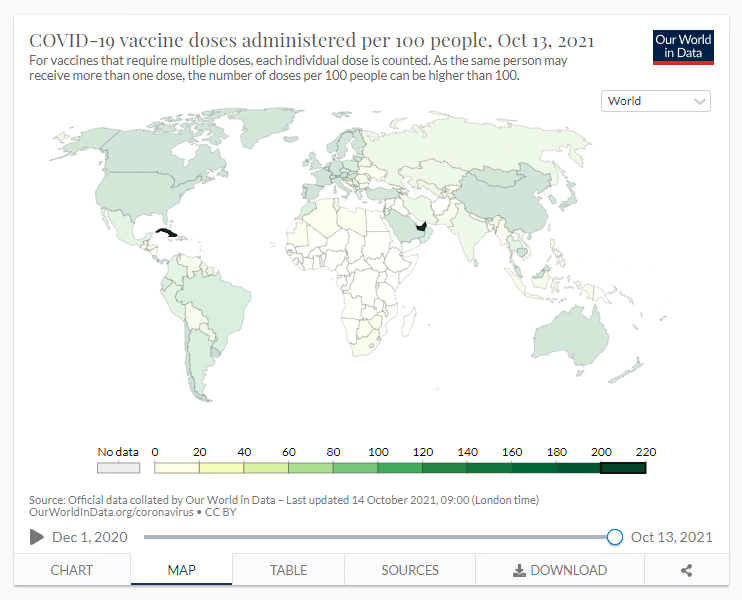 The health ministry further reports that 9,654,453 people have received at least one dose of one of its vaccines, which represents 86.3% of the total population.

According to the data collected by Our World in Data information platform, Cuba is one of the top two countries in the world, with the UAE, which has administered the highest number of doses per 100 people. It leads the list in the Latin American and the Caribbean region.

Cuba began its vaccination drive on May 12. Last month, on September 6, the country began immunizing its pediatric population and became the first country in the world to inoculate children from the age of two. The Caribbean country aims to inoculate 100% of its population by the end of the year.

On September 22, the president of Cuba’s state-owned pharmaceutical company BioCubaFarma, Eduardo Martínez Díaz, announced that all the doses of the Cuban anti-COVID-19 vaccines, Abdala, Soberana 02 and Soberana Plus, required to immunize the country’s population, have been produced.

The small island country has also begun exporting its vaccines. In June, Venezuela became the first country to purchase 12 million doses of Abdala vaccine. In July, Iran approved the emergency use of Soberana 02 and began manufacturing the vaccine in the country under the PastuCovac agreement. In September, Vietnam also signed a deal to purchase 10 million doses of Abdala. The countries also reached agreements to manufacture the vaccine in Vietnam. In the first week of October, Nicaragua approved the emergency use of both Abdala and Soberana 02 with Soberana Plus for its pediatric population and signed a deal with Cuba to secure doses for its entire child population.

Abdala and Soberana 02 vaccines are among the top 5 most effective vaccines worldwide. In the third week of June, the country announced that Abdala, developed by the Center for Genetic Engineering and Biotechnology (CIGB), showed 92.28% efficacy with three doses during the third phase of clinical trials. In the first week of July, it shared the news that Soberana 02, developed by the Finlay Vaccine Institute (IFV), showed 91.2% efficacy with a third booster shot of Soberana Plus during its third phase of clinical trials.

Cuba’s Center for State Control of Medications, Medical Equipment and Devices (CECMED) authorized the emergency use of the Abdala and Soberana 02 and Soberana Plus on July 9 and August 20, respectively. After receiving the approval from the national regulatory authorities -CECMED-, on September 16, Cuba scientists began the process to receive recognition from the World Health Organization (WHO).

In addition to these three vaccines, Cuban scientists are also developing Soberana 01 and Mambisa vaccines. The latter is a nasal spray vaccine, one of the few of this type globally.

Besides setting inspiring records at international and regional levels in vaccinating the population, developing vaccines against COVID-19, amid countless difficulties caused by the commercial, economic and financial sanctions imposed by the US, Cuba successfully fought a recent deadly wave of coronavirus due to the delta variant. According to the official data, Cuba maintains a recovery rate of 97.9%, with a total of 928,684 cases and 7,994 deaths from the disease.