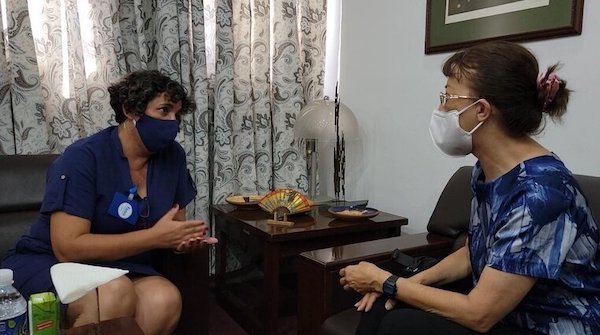 After a serious rise in Cuba of illnesses and deaths from COVID-19 during the summer, there are encouraging developments with a steady recovery and downward curve in illnesses and deaths. Similar to the worldwide “third wave” of COVID, the Delta variant quickly became the dominant mutation in Cuba and swept through the island.

Now, people are breathing a sigh of relief this month. Workplaces, restaurants, beaches and public spaces are opening up and tourism is soon to be welcomed on Nov. 15. Of course, health experts still urge continued caution to avoid a new outbreak.

Massive vaccination of the population means that by Nov. 15, an astounding 92% of the whole population will be fully vaccinated thanks to Cuba’s development and production of its own vaccines: Abdala, Mambisa and Soberana Plus. In fact, Cuba’s vaccination rate is the fastest in the world, and the only country whose children as young as two years are being covered.

On Nov. 15, all children will return to school in person, fully vaccinated. Compare that to Texas and Florida, where both governors have banned mask mandates in public schools. 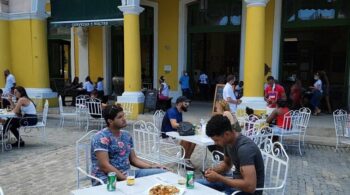 Life begins to return to normal at an outdoor cafe in Old Havana following a highly successful vaccination campaign, Oct. 10

Cuba’s vaccination and its early medical intervention in positive cases are the two factors responsible for Cuba’s recovery rate of 97.5% of those who have fallen ill, compared to the world rate of 90.46% and 85.3% in Latin America and the Caribbean. These statistics were conveyed in a national meeting of scientists, medical experts and statisticians together with government leaders that was headed by President Miguel Díaz-Canel on Oct. 12.

For people who are allergic to the ingredient thiomersal in the vaccines, a thiomersal-free vaccine was released on Sept. 25.

From a high of new COVID cases that reached more than 9,000+ per day in August, October’s new cases are showing a major decline. Oct. 14 saw 2,138 new positive cases, with a 2,488 daily average the last five days.

From hospitals to famed biotechnology centers to production of medical equipment, Cuba’s heroes in these fields are essential actors in the country’s resistance to the blockade and pandemic. They are achieving great feats in the midst of the most severe economic measures the U.S. government has ever imposed on Cuba. Trump signed 243 measures to strangle Cuba’s economy. Biden has not only maintained Trump’s anti-Cuba acts, but added new sanctions. The CIA and its front groups are fueling new subversive aggression. 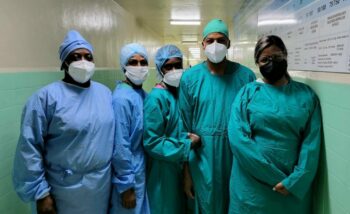 The improved health indices and scientific advances are part of Cuba’s immunity to U.S.-backed counterrevolutionary efforts.

I visited the Pediatric Teaching Hospital of San Miguel del Padrón this week, which was designated early in the pandemic to care for children with COVID who have high-risk factors, like heart conditions. The doctors and nurses say proudly that not one child at this hospital has died from COVID during the whole pandemic.

In the peak of the pandemic from May to August, the 200 hospital beds were filled with vulnerable children. Today we have only 42 patients, which speaks to the recovery of the country’s epidemiological situation.

The latest development in Cuba’s vaccines

Cuba’s biotechnology industry is at the heart of the COVID fight. The government and scientists knew from the start that Cuba would have to depend on its own solutions to the pandemic and not fall victim to the world’s pharmaceutical giants and the blockade. 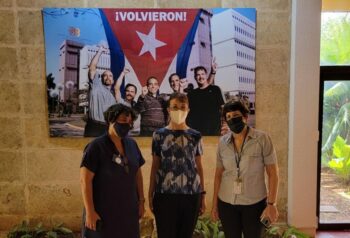 Miladys Limonta Fernández of the Center for Genetic Engineering and Biotechnology (CIGB) spoke to me to explain CIGB’s latest development this past week. As she explained, for over 30 years Cuba has used a time-tested process for development of other vaccines. Test studies showed that CIGB’s Abdala vaccine is safe for children two years old and up. Compare that to the Pfizer and Moderna vaccines, which are based on a new platform based on mRNA. This the first time that a product based on the mRNA platform is used in human beings.

And with just-completed major clinical studies, a special nasal vaccine of the Mambisa line has now advanced to Phase 2. Limonta said, “This is most advantageous because the virus enters through the nasal passage. Of all the vaccines in the world, there are only five that have nasal application. Cuba is one of them.” She says that recently some AstraZeneca´s researchers knew of Cuba’s successful clinical studies and “they are interested in discussing with us to exchange more about Cuba’s and AstraZeneca findings.”

The science centers have all jumped into the urgent tasks needed for the anti-COVID fight. Recently, engineers and technicians at the Neurosciences Center (CNeuro) began producing ventilators to overcome the blockade, spare parts and PPE items. Yanet Gárriga, a resourceful young engineer and engineer Lian González designed the mold for small plastic “Y” connectors to double the capacity of the ventilators. 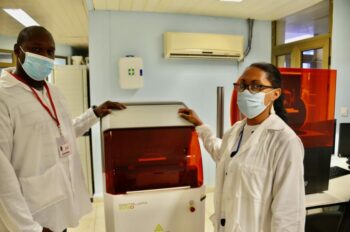 She showed me many of the items that the Neurosciences Center has produced in this time of pandemic. It is not the typical work of the center, but as Dr. Limonta says of CNeuro, “we all work together among our centers.” In Cuba, the people’s health, not profits, is the driving motive.

In Havana and other provinces where cases are lower, the government has allowed restaurants, cafes and beaches to open. And there is great anticipation for the opening up of the country to international tourism on Nov. 15.

It is no accident that the coordinated protests which broke out in Cuba on July 11 were timed by U.S. imperialism to take advantage of the especially difficult circumstances of Cubans as the COVID crisis was reaching its peak in July. Now the same counterrevolutionary forces, small in number but magnified in the U.S. media, have called for demonstrations on Nov. 15, just when tourism is due to open up and school is in full swing. But as the Cuban people have shown time and again, they will overcome and defeat the next aggressions as well.