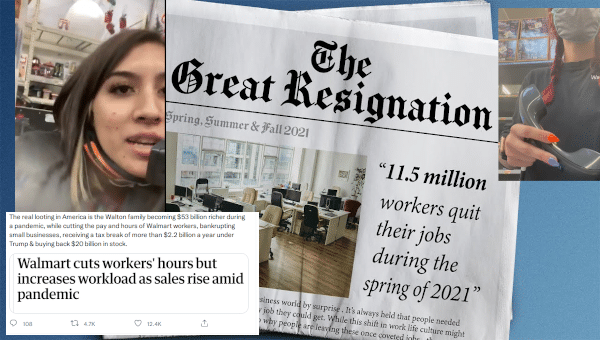 On September 14, a young woman in Louisiana named Beth McGrath posted a selfie Facebook video of herself working at Walmart. Her body language shows a nervous energy as she works up the courage to speak on the intercom and announces her resignation to shoppers. “Everyone here is overworked and underpaid,” she begins, before going on to call out specific managers for inappropriate and abusive behavior. “I hope you don’t speak to your families the way you speak to us,” she said before ending with “f**k this job!”

Perhaps McGrath was inspired by Shana Ragland in Lubbock, Texas, who nearly a year ago carried out a similarly public resignation in a TikTok video that she posted from the Walmart store where she worked. Ragland’s complaints were similar to McGrath’s as she accused managers of constantly disparaging workers. “I hope you don’t talk to your daughters the way you talk to me,” she said over the store intercom before signing off with,

F**k the managers, f**k this company.

The viral resignations of these two young women are bookending a year of volatility in the American workforce that economists have branded the Great Resignation. Women in particular are seen as leading the trend.

The seriousness of the situation was confirmed by the latest Bureau of Labor Statistics report showing that a record 2.9 percent of the workforce quit their jobs in August, which is equivalent to 4.3 million resignations.

If such a high rate of resignations were occurring at a time when jobs were plentiful, it might be seen as a sign of a booming economy where workers have their pick of offers. But the same labor report showed that job openings have also declined, suggesting that something else is going on. A new Harris Poll of people with employment found that more than half of workers want to leave their jobs. Many cite uncaring employers and a lack of scheduling flexibility as reasons for wanting to quit. In other words, millions of American workers have simply had enough.

So serious is the labor market upheaval that Jack Kelly, senior contributor to Forbes.com, a pro-corporate news outlet, has defined the trend as, “a sort of workers’ revolution and uprising against bad bosses and tone-deaf companies that refuse to pay well and take advantage of their staff.” In what might be a reference to viral videos like those of McGrath, Ragland, and the growing trend of #QuitMyJob posts, Kelly goes on to say,

The quitters are making a powerful, positive and self-affirming statement saying that they won’t take the abusive behavior any longer.

Still, some advisers suggest countering the worker rage with “bonding exercises” such as “Gratitude sharing,” and games. Others suggest increasing trust between workers and bosses or “exercis[ing] empathetic curiosity” with employees. But such superficial approaches entirely miss the point.

The resignations ought to be viewed hand in hand with another powerful current that many economists are ignoring: a growing willingness by unionized workers to go on strike.

Film crews may soon halt work as 60,000 members of the International Alliance of Theatrical Stage Employees (IATSE) announced an upcoming national strike. About 10,000 employees of John Deere, who are represented by the United Auto Workers, are also preparing to strike after rejecting a new contract. Kaiser Permanente is facing a potential strike from 24,000 of its nurses and other health care workers in Western states over poor pay and labor conditions. And about 1,400 Kellogg workers in Nebraska, Michigan, Pennsylvania and Tennessee are already striking over poor pay and benefits.

The announced strikes are coming so thick and fast that former U.S. Labor Secretary Robert Reich has dubbed the situation “an unofficial general strike.”

Yet union representation remains extremely low across the United States–the result of decades of concerted corporate-led efforts to undermine the bargaining power of workers. Today only about 12 percent of workers are in a union.

The number of strikes and of striking workers might be far higher if more workers were unionized. Non-union workers like McGrath and Ragland hired by historically anti-union companies like Walmart might have been able to organize their fellow workers instead of resorting to individual resignations. While viral social media posts of quitting are impactful in driving the conversation around worker dissatisfaction, they have little direct bearing on the lives of the workers and the colleagues they leave behind.

One example of how union organizing made a concrete difference to working conditions is a new contract that 7,000 drug store workers at Rite Aid and CVS stores in Los Angeles just ratified. The United Food and Commercial Workers Local 770 negotiated a nearly 10 percent pay raise for workers as well as improved benefits and safety standards.

And when companies don’t comply, workers have more leverage when acting as a collective bargaining unit than as individuals. Take Nabisco workers who went on strike in five states this summer. Mondelez International, Nabisco’s parent company, saw record profits during the pandemic with surging sales of its snack foods. So flush was the company with cash that it compensated its CEO with a whopping $16.8 million annual pay and spent $1.5 billion on stock buybacks earlier this year. Meanwhile, the average worker salary was an appallingly low $31,000 a year. Many Nabisco jobs were sent across the border to Mexico, where the company was able to further drive down labor costs.

After weeks on the picket line, striking Nabisco workers, represented by the Bakery, Confectionery, Tobacco Workers and Grain Millers International Union, returned to work having won modest retroactive raises of 2.25 percent, $5,000 bonuses and increased employer contributions to their retirement plans. The company, which reported a 12 percent increase in revenue earlier this year, can well afford this and more.

Taken together with mass resignations, such worker strikes reveal a deep dissatisfaction with the nature of American work that has been decades in the making. Corporate America has enjoyed a stranglehold over policy, spending its profits on lobbying the government to ensure even greater profits at the expense of workers’ rights. At the same time, the power of unions has fallen – a trend directly linked to increased economic inequality.

But now, as workers are flexing their power, corporate America is worried.

In the wake of these strikes and resignations, lawmakers are actively trying to strengthen existing federal labor laws. Business groups are lobbying Democrats to weaken pro-labor measures included in the Build Back Better Act that is being debated in Congress.

Currently, corporate employers can violate labor laws with little consequence as the National Labor Relations Board (NLRB) lacks the authority to fine offenders. But Democrats want to give the NLRB the authority to impose fines of $50,000 to $100,000 against companies who violate federal labor laws. Also included in the Build Back Better Act is an increase in fines against employers that violate Occupational Safety and Health Administration (OSHA) standards.

The Coalition for a Democratic Workplace, which is a business lobby group that wants anything but democracy in the workplace, is deeply concerned about these proposed changes and sent a letter to lawmakers to that effect.

It remains to be seen if corporate lobbyists will succeed this time around at keeping labor laws toothless. But as workers continue to quit their jobs, and as strikes among unionized workers grow, employers ignore the warning signs of rage and frustration at their peril.