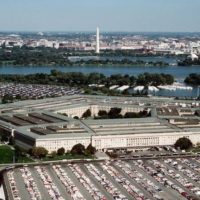 The U.S. military’s budget, like so many police department budgets, is bloated, and diverts our tax dollars into forces of domination and violence. Now is the time to question our spending priorities at the local and federal level.

Play now: “Not everybody is happy about what happened after the Wall went down.  In fact, it’s often referred to in East Germany not as German reunification but as West German annexation or even colonization, because the economy in East Germany took a nosedive after the two joined, the East and the West joined — […]