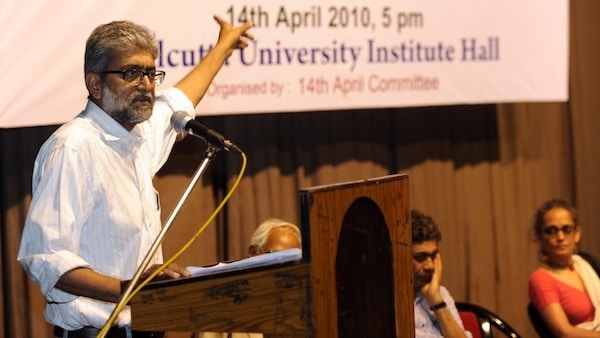 In a statement, Sahba Husain said the activist was shifted on October 12. Husain questioned how long would Navlakha be “persecuted for his views and to what extent will the authorities go to break his spirit.”

The statement further said the accused in the Elgar Parishad case have faced indignities and humiliation for the most basic needs in prison.

“In the [high-security barracks], he is deprived of daily walks in the jail’s non-concreted greener areas and fresh air and his health has deteriorated further, making specialized medical care an absolute necessity, if he is to live to fight this unjust and false case hoisted on him,” Husain said.

“These are prisoners of conscience, who have had to face indignities and humiliation for the smallest needs, and wage court battles for basic dignities in prison,” said Husain referring to the incident where Navlakha’s spectacles went missing and the prison authorities refused to accept the parcel with a spare.

“Gautam has faced his unjustified incarceration with courage and spirit. How much longer is he going to be persecuted for his views, and to what extent will the authorities go to break his spirit,” said Husain.

Navlakha was arrested for alleged involvement in the Elgar Parishad-Maoists links case on August 28, 2018. While he was initially kept under house arrest, he was subsequently sent to judicial custody and was detained at the Taloja prison in Navi Mumbai.

The statement also said that the prison authorities discontinued Navlakha’s telephone calls to Husain and his lawyers “on the pretext that inmates can now be met in jail physically.”

It added that without his weekly calls to Husain and his lawyers, Navlakha’s life and his defense would be severely compromised.

“Gautam’s fragile health and well-being will be further jeopardized by this withdrawal of phone call facility to his family and lawyers,” the statement said.

Husain also quoted what Navlakha wrote to her, “confinement in the [high-security barrack] means denial of fresh air/oxygen as there is not a single tree or plant in the open space of the circle. We are forbidden to step outside.”

“In other words, we spend 16 hours out of 24 cooped inside our cell and the 8 hours we are let out, we are confined to a corridor for our daily walk on the cemented floor surrounded by high walls all around,” Husain stated, quoting Navlakha.

The statement also referred to the recent death of Jesuit priest Stan Swamy, a co-accused in the Elgar Parishad case, who too had allegedly struggled in prison to get basic facilities and died while awaiting bail on health grounds.

Husain said since she lives in Delhi, she has to travel frequently to Mumbai to meet Navlakha in jail for the allotted ten minutes.

“Gautam’s only contact with me is through the two phone calls he was allowed every week to me that enabled me to send him articles of need, including medicines, books and so on. With the discontinuance of phone calls, all this will now depend on letters that take a minimum of two weeks to reach me,” the statement said.

Apart from calls to her, regular access to lawyers through phone calls is also an essential facility for undertrial prisoners.

“To deprive an undertrial prisoner of this effective and efficient mode of securing legal advice and help, or access to family, is the height of unfairness,” Husain said.

Navlakha filed a petition in the Bombay High Court in September seeking to be shifted from the Taloja prison to judicial custody in the form of house arrest owing to his advanced age and the medical ailments he suffers. The plea is pending before the court.