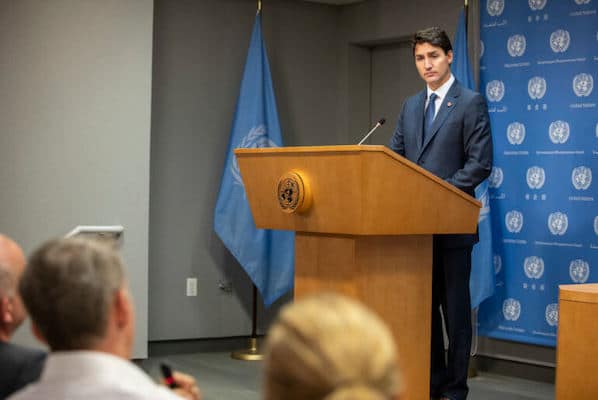 Echoing Donald Trump’s “very fine people on both sides” statement after white supremacists rampaged in Charlottesville, Virginia in 2017, Canada’s Prime Minister Justin Trudeau has made his own speech equating anti-racists with white supremacists.

Speaking to a crowd over videocast on October 14 at an international conference in Malmö, Sweden on combating antisemitism and racism, Trudeau bemoaned “a rise in intolerance” in Canada and elsewhere that has since spurred the comparison to Trump over social media, yet received little attention from traditional media.

“We see the organizations of extremist groups on the far-right and the far-left that are pushing white supremacy, intolerance, radicalization, promoting hatred, fear and mistrust across the borders but within borders, as well,” he said.

Today, @JustinTrudeau equated anti-racists and anti-fascists with white supremacists and the far-right. This is disinformation. It is irresponsible. And it warrants an apology. #cdnpoli pic.twitter.com/wvCyI0J4PF

the far-left want equal rights for all. The far-right want to redefine citizenship and discriminate against, exile, or murder people who don’t meet their identity-based purity tests.

Canada’s leading Israel lobby organization, the Centre for Israel and Jewish Affairs, created an Instagram graphic applauding Trudeau for lumping the far-left and far-right together.

What prompted a Liberal PM to equate the left with the right? The answer is obvious. Trudeau was defending a violent, colonial outpost in the Middle East that practices what Human Rights Watch, B’Tselem, many South African officials, and millions of Palestinians have labeled “apartheid.” Although, those criticizing Trudeau mostly ignored the Israel angle.

The venue of the speech, the Malmö International Forum on Holocaust Remembrance and Combating Antisemitism, promotes the International Holocaust Remembrance Alliance’s (IHRA) definition of antisemitism. This definition seeks to label criticisms of Israel and Israeli policy as antisemitic. As part of his remarks, Trudeau confirmed that Canada’s temporary special envoy on preserving Holocaust remembrance and fighting antisemitism would become a permanent position. Primarily designed to deflect criticism from Israeli apartheid, the position was created last year for one of Canada’s most vocal supporters of Israel, former Minister of Justice and Attorney General Irwin Cotler.

While directly lumping together the far-left and far-right is extreme, Trudeau has repeatedly smeared the left when speaking about Israel or on antisemitism. When he apologized for Canada rejecting Jewish World War II refugees in November 2018, Trudeau equated the movement for boycott, divestment, and sanctions against Israel with a hate crime, declaring “Jewish students still feel unwelcome and uncomfortable on some of our college and university campuses because of BDS-related intimidation.”

In November 2019 Trudeau sided with the far-right Jewish Defence League after the group punched and shoved pro-Palestinian protesters during a presentation by Israeli reservists at York University. In the confrontation, a pro-Palestinian supporter was left unconscious, and the JDL yelled racial epitaphs at York Amnesty International members who support Palestinians.

The far-left want equal rights 4 all. The far-right want to redefine citizenship and discriminate against, exile, or murder people who don't meet their identity-based purity tests. The far-left protests violent removals of houseless people. The far-right throw stones at the PM.

There are some parallels with redbaiting. At different points since the late 1800s labeling individuals and groups “anarchist” or “communist” succeeded in demonizing, isolating, and imprisoning individuals and undermining socially driven policies. This resulted in a divided left. Progressives required a strategy to respond then as they do now. Pretending it’s not happening won’t work.

The first step is talking about the problem. We need an open debate about how best to counter this antisemitism-baiting. It will require confronting those who use the term as a weapon to weaken Palestinian solidarity. And, we must learn to trust our friends and allies and refrain from furthering unfounded accusations.