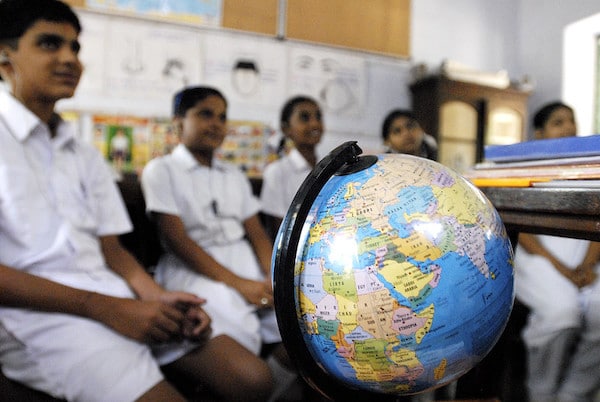 EDUCATION in post-independence India was supposed not just to provide knowledge and skills to students, but also to facilitate the process of “nation-building” (to use a clumsy word). Since the concept of an “Indian nation”, although it existed in a rudimentary form earlier (going back even to the writings of Amir Khusrau), came into vogue only during India’s anti-colonial struggle, the “nation-building” role of education requires above all an awareness of this struggle, which in turn demands familiarity with the condition of India under colonial rule, and the facts of exploitation of its people. It is not just students of humanities and social sciences who need to have this familiarity, but all students, including those doing the natural sciences and engineering, if they are to become what Antonio Gramsci had called “organic intellectuals”, of the people of free India.

The production of such “organic” intellectuals necessarily implies therefore that the curriculum, and course contents of education, not just of higher education but even of elementary education, should be different in India compared to the advanced countries, where, for instance, the deprivations inflicted by colonialism on the colonised people hardly ever get mentioned. In fact J D Bernal, the renowned British scientist, was of the view that even in the natural sciences, countries like India should have a syllabus and a course content that should be sui generis and not imitative of the metropolis. For instance, given the nature of the disease profile in India, the medical education of Indian doctors must have an emphasis that is different from, say, in Britain. (This is in addition to the fact that Indian doctors must also know about colonialism and the anti-colonial struggle).

It follows that if education in countries like India is to serve its true purpose, then it must have a content different from education in metropolitan countries. This is not to suggest that the basic propositions of physics or chemistry or mathematics should not be taught in India; it is simply to say that they have to be organised within a syllabus that is not identical with what is taught in advanced countries. And this is a view that was generally accepted in academic circles in India for a long time.

With neo-liberal globalisation however we have the very opposite happening. The multinational corporations straddling the world would like to get personnel who can be moved around from one country to another. And quite apart from the question of the mobility of the personnel, the very mobility of capital across countries requires that the environment should be uniform in the different host countries, including the attitudes and intellectual formations of the personnel it recruits. Globalised capital in short would ideally like the educated middle class, from which it employs its personnel, to be as alike everywhere as possible and also as close in its views as possible to what it finds in the metropolis.

It has a deep interest therefore in having a homogeneous education system across the world that produces identical potential recruits and social support base for itself. This is exactly what neo-liberalism would like to see replicated in countries like India and the New Education Policy of the Modi government attempts to do this.

Such homogenisation of education is perfectly compatible with the Hindutva emphasis on the so-called “greatness” of ancient India, on the marvels of Indian science and mathematics in antiquity in this or that particular area (excluding all Islamic contributions), and on the supposed oppression of the Hindus in medieval India; for none of it impinges on the colonial period or about the exploitation by colonialism of the Indian people, Hindu and Muslim alike. This exploitation was altogether different from all previous historical experience of the country since it entailed a “drain” of wealth from India and deindustrialisation of its craftsmen, both of which conjointly created modern mass poverty.

Thus the conversion of the syllabus and course content in India to bring them in line with what is taught elsewhere in the neo-liberal world as an implantation from metropolitan universities, together with a dash of Hindutva ideology specific to India, fits perfectly well with the Modi government’s agenda. It is the counterpart in the realm of education of the corporate-Hindutva alliance that currently dominates the Indian polity. The corporate element that is integrated with globalised capital is happy with the homogenisation of education that obliterates all reference to the impact of colonialism and colonial exploitation, and looks at capitalism as a more or less self-contained system, while the Hindutva element is happy with the crumbs of comfort that are offered to it in the form of an acknowledgement of the supposed “greatness” of ancient India.

The homogenisation of the syllabus and course content which is also reflected in the drive to induce reputed foreign universities to set up off-shoots in India (a drive of which the Modi government is not the originator but which had begun even under UPA II reflecting its neo-liberal outlook) is sought to be justified by the argument that it would make Indian universities “world-class”. This argument is wrong, first, because accepting this concept of “world class” and tailoring our universities to meet this objective itself amounts to accepting the hegemony of metropolitan universities, since the criteria by which “world class-ness” is judged are devised in the metropolis itself, the so-called “refereed journals” where publication is deemed to characterise “world class-ness” are primarily located there and shun any references to colonial exploitation; and so on. The objective should be to make our universities truly serve the needs of “nation-building” rather than chasing “world class-ness”.

This does not of course mean closing our eyes to the abysmal quality of most of our institutions of higher learning. But that quality must be judged by our own criteria and the improvement in it must be along a trajectory that does not entail abandoning altogether the “nation-building” objective of our education system.

Secondly, imitating reputed metropolitan universities is not even the way to acquire quality. Our institutions imitating Harvard, Oxford and Cambridge will forever be doomed to mediocrity; and, what is more, this process will doom our entire education system to mediocrity. Institutions that lack the resources to get faculty and infrastructure even remotely comparable to the foreign universities, which will typically be the public institutions, will, in such an ambience where the metropolitan universities are held up as models, have an inferiority complex that would prevent them from even providing the basic bread-and-butter education they could otherwise have provided. On the other hand, institutions that have the resources to entice faculty and provide infrastructure that could match foreign universities, will forever be losing their best faculty to foreign universities: why should anyone stay on in a third world institution imitating Yale, if that person has the remotest chance of actually landing a faculty job in Yale or in some university abroad that is a stepping stone to Yale?

Put differently, the homogenisation of education, in the sense of the syllabus and the course content, would necessarily entail a homogenisation of student intake (predominantly middle-class), and of work-motivation as well. The desire to serve the people by putting one’s abilities at the disposal of a system that trains children of the common folk in a public institution, will be replaced by the desire to migrate to the original locales whose copies the domestic educational institutions aspire to be.

If third world countries like India are to have educational institutions that are worthwhile, not just for “nation-building” but even for creating an academic ambience of any merit, then they must eschew the pressure to imitate the syllabi, the work-incentives, and the outlook of institutions located abroad, no matter how reputed they may be. Education must be rooted in the reality of a country; otherwise it becomes second rate.

Problems relating to the specificity of the Indian society, such as caste oppression for instance, will cease to be the focus of academic attention, because, for globalised capital, such problems are of no great consequence, and, for the Hindutva brigade, they detract from the “greatness” of the Indian civilization and are best swept under the carpet. It is not an accident that in the entire text of the National Education Policy there is scarcely any mention of caste, either as an obnoxious feature of the Indian society, or as requiring affirmative action in universities in the processes of admission, appointment and promotion. This silence too is a fall-out of homogenisation.