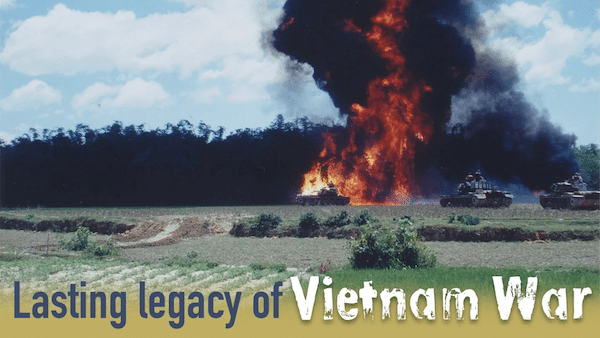 The Vietnam War (1955-1975) is known to the Vietnamese as the “American War,” or the “War Against the Americans to Save the Nation.”

In 1954, countries at the United Nations in Geneva agreed to hold a general election in the former French colony divided by Cold War alliances. Since the communist north Vietnam wanted to unite the country, the United States did not want an election and backed the south in a bid to stop communism from gaining ground in Southeast Asia. A year later, the Vietnam War broke out.

As part of the American War, U.S. military sprayed more than 20 million gallons of herbicide on Vietnam, Laos, and Cambodia–the campaign destroyed five millions acres of forest (including rubber planations) and untold millions of acres of crops (including rice).

A 2019 article from the University of Illinois and Iowa State University documents the environmental legacy of Agent Orange in Vietnam, including hotspots where dioxin continues to enter the food supply today.

Much of the existing Agent Orange and dioxin research is primarily medical in nature, focusing on the details of human exposure primarily through skin contact and long-term health effects on U.S. soldiers.

However, during the Vietnam War, United States aircraft sprayed more than 20 million gallons of defoliant herbicides, including dioxin-contaminated Agent Orange, on the country’s rain forests, wetlands, and croplands. Agent Orange defoliated the thick jungle vegetation and destroyed a portion of the country’s food crops. 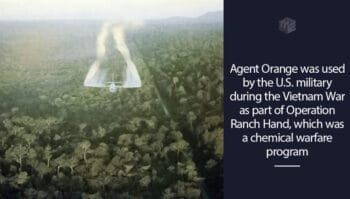 The 2019 research examined the “short and long-term environmental effects on the Vietnamese natural resource base and how persistence of dioxin continues to affect soils, water, sediment, fish, aquatic species, the food supply, and Vietnamese health.”

Agent Orange was a combination of two herbicides, 2,4-D and 2,4,5-T, neither of which persist longer than a few weeks in the environment when exposed to sunlight. However, during production of Agent Orange, a toxic byproduct formed: dioxin TCDD, the most toxic of the dioxin family of chemicals. The authors point out that “once dioxin TCDD gets into the environment, it can stick around for decades or even centuries. That’s what happened in the Vietnam landscape.”

The researchers examined over a dozen previous research reports on contaminated sites in Vietnam to understand dioxin TCDD’s movement and long-term fate throughout the Vietnam countryside. The article mapped 10 former U.S. airbase sites where dioxin TCDD levels remain at dangerous levels, noting that millions of Vietnamese live in adjacent cities and villages.

The ecology of forests and plantations were devastated by Agent Orange and soils and waterways contaminated with environmentally persistent dioxins.

The pathway into the ecosystem “begins with the U.S. military spraying in the 1960s, absorption by tree and shrub leaves, leaf drop to the soil surface (along with some direct contact of the spray with the soil), then attachment of the dioxin TCDD to soil organic matter and clay particles of the soil.”

From there, dioxin TCDD moved offsite in surface runoff, clinging to sediment particles and settling in wetlands, marshes, rivers, lakes, and ponds. Dioxin TCDD-contaminated sediment was–and still is–ingested by bottom-feeding fish and shrimp, accumulating in fatty tissue of those animals and up the food chain into many of the fish that form the basis of the Vietnamese diet. Even though fishing is now banned from most contaminated sites, bans have been difficult to enforce and, as a result, dioxin TCDD is still entering the human food supply 50 years later. 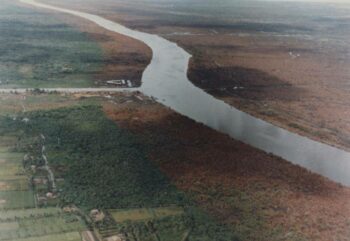 The authors concluded that high temperature incineration would eliminate dioxin rather than temporarily store it in a landfill, and incineration would not require future maintenance or treatment. This form of incineration is the most expensive technology currently available for destroying persistent organic toxins, and is one of the most commonly used technologies It has been used to treat soils at more than 150 U.S. “superfund” contaminated sites, and is a mature and tested technology,” the authors said.

Active involvement of U.S. troops in Vietnam began from 1965 and by 1969, more than 500,000 U.S. military personnel were fighting in the war that had turned into the bloodiest conflict since World War II.

For many in the West, this period evoked an anti-war movement that transformed the social and cultural landscape. But for countries in Asia, including Vietnam, Cambodia and Laos, the 20-year war left a lasting legacy of terror and destruction long after the fighting stopped.

As historian Nick Turse documented in his harrowing 2013 book “Kill Anything That Moves: The Real American War in Vietnam,” the defining feature that makes memories of this war so difficult for many Americans was the relentless violence against civilians: the massacres of women, children and the elderly, rapes, indiscriminate bombardment, burning down of villages and routinized torture.

One of the most infamous incidents of mass atrocities against civilians by U.S. troops was the My Lai massacre in March 1968, when U.S. troops killed some 500 civilians in a murderous spree the U.S. military would deliberately cover up and spin as a victory over the “Viet Cong”. 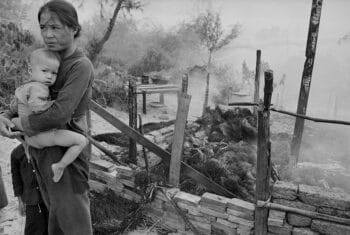 A mother and her child after the burning of their village near Saigon during the Vietnam War. /CFP

Matthew Dallek, associate professor at George Washington University’s Graduate School of Political Management, said the massacre and the cover-up are a particularly dark moment in the history of modern America, which raised big questions about whether the U.S. was capable of defending freedom, democracy and human rights in far-flung places.

“The government’s claim of ‘defending’ Southeast Asia from atheistic communist aggression had become a cruel and paradoxical hoax,” Dallek said.

According to a study by Harvard Medical School and the University of Washington, there were 3.8 million violent war deaths, of which 2 million were civilians.

The cruelty against civilians was more than a collection of isolated incidents, but the official policy. According to former Secretary of State John Kerry, a Vietnam veteran, in his 1971 testimony before the Senate, such atrocities were “crimes committed on a day-to-day basis with the full awareness of officers at all levels of command.”

This unpopular war sparked widespread anti-war protests in the West. A large number of U.S. servicemen returning from Vietnam were left traumatized for life.

But the horrors were far from over when the Americans evacuated Saigon, the former capital of south Vietnam, in 1975. More than 40 years on, the impact of U.S. chemical warfare in Vietnam has been astonishing.

The Red Cross of Vietnam estimates that nearly 1 million people suffered severe health complication and disabilities due to exposure. Hundreds of thousands of children were born with serious birth defects. The environmental destruction is immeasurable and irreversible.

Around 2.8 million U.S. veterans were also exposed, the U.S. Veterans Administration said. While American victims of Agent Orange are eligible for government compensation, along with multi-million-dollar settlements from lawsuits brought against manufacturers of the chemical, no one has been held officially accountable for the suffering of Vietnamese victims. 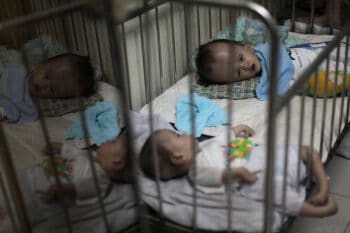 Decades after the war, people in Southeast Asia are still getting killed by detonation of live bombs and mines left in the region during war time. In 2018, the New York Times reported that more than 300,000 tonnes of unexploded ordnance (UXO) remain in Vietnam, while Vietnamese media claimed there were 725,000 tonnes of UXO scattered across the country.

It is estimated that more than 20 percent of the land in Cambodia, Laos and Vietnam is contaminated by UXO. Extensive areas of the three nations continue to be unavailable for agriculture, industry or habitation, hindering the economic development of the countries.

Laos is thought to be the most heavily bombed country in the world per capita as a result of the Vietnam War. According to the Geneva-based Landmine and Cluster Munition Monitor, there have been over 50,000 UXO casualties in Laos since 1964, including over 29,000 deaths. Around 40 percent of victims are children. The problem is so dire in Laos that the United Nations Development Program (UNDP) even made UXO clearance a development goal for the country.

Despite continued efforts by the three countries, the U.S. and the international community, it reportedly could take 100 years or more to clear the countries of UXO.

War legacy issues like Agent Orange contamination and UXO have played an important role in the relations between the U.S. and Vietnam, and also neighboring countries affected by the Vietnam War. Since the 1990s, the U.S. has provided assistance to cleanup efforts and victim relief in Southeast Asia via various channels.

However, the ongoing challenges present a number of issues for the U.S. Congress. For instance, there is the question of whether a similar policy should be applied to U.S. wars in other parts of the world, such as Iraq and Afghanistan.