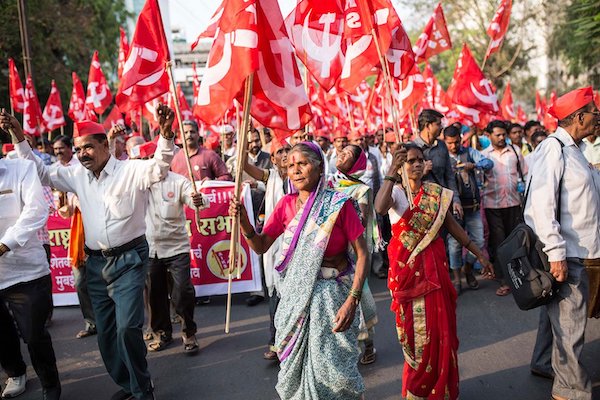 Particular battles often have a significance that goes beyond the immediate context, of which even the combatants may not be fully aware at the time. One such was the Battle of Plassey, which was not even a battle since one side’s general had already been bribed by the other not to lead his troops against it; and yet what happened in the woods of Plassey that day ushered in a whole new epoch in world history.

The battle between the kisan movement and the Modi government falls into the same genre. At the most obvious level it has been seen as a climbdown by the Modi government in the face of the incredible resoluteness shown by the agitating peasants. At another level it has also been seen as a setback for neo-liberalism, since corporate ascendancy over the agricultural sector, by making peasant agriculture subservient to the corporates, is a crucial part of the neo-liberal agenda, which the farm laws were seeking to promote.

Both these perceptions are absolutely correct. But beyond them there is a third level, at which the kisan victory is of great significance, that has not received much attention. This relates to the fact that the kisan victory is a setback for imperialism in a very fundamental sense. One should scarcely be surprised therefore by the fact that the western media have been so critical of the Modi government for its climbdown.

Just as imperialism wants to corner all the food and raw material sources across the globe, just as it wants to control all the sources of fossil fuels in the world, it also wants to control the entire pattern of land-use all over the world, especially in the third world, most of which falls within the tropical and subtropical zone and hence is capable of growing crops that the temperate region, within which metropolitan capitalism is located, cannot grow.

Colonialism gave the metropolis an ideal instrument for controlling land use across the world for its own benefit. This instrument was used in a country like India in a brazen manner. Since revenue demands of the colonial government had to be met by the peasants by certain fixed dates (failing which they forfeited whatever land rights they had), they took advances from merchants to meet these demands, and in turn grew crops that the merchants wanted, for sale to them at pre-contracted prices; these merchants in turn dictated the production of those crops for which there was much demand in the metropolis (as revealed by market signals). Or, alternatively as in the case of opium the agents of the East India Company directly obliged the peasants to take advances tied to growing that crop.

Land-use was thus controlled by the metropolis, with crops like indigo, opium and cotton being grown on tracts where they had never been grown before and replacing food grains production; they were obtained gratis by the metropolis since the peasants were paid for them from the same revenue that they themselves had handed over to the colonial ruler. And among colonising countries, such goods, extracted from their respective colonies, were traded after meeting what was required by each, including for settling deficits through triangular trade (such as, opium forcibly grown in India, being exported to China that was forcibly made to consume it, to settle Britain’s trade deficit with that country). The peasants were ruthlessly exploited: the plight of the indigo growers was so poignantly and vividly captured in the nineteenth century Bengali play Neel Darpan by Dinabandhu Mitra that Ishwar Chandra Vidyasagar, the great social reformer, who was in the audience when the play was being staged, had thrown his sandals in anger at the actor playing the role of the planter-merchant!

This mechanism, of rigidly timing revenue demands on the peasants, getting traders to give them advances and thereby influencing cropping pattern, and then buying the crops with the same revenue that the peasants had paid, is no longer available to the metropolis; and the protection offered to peasant agriculture by the post-independence dirigiste regime, which has taken the form of providing price support for foodgrains, has made the peasants ignore the dictates of the metropolis on the output-mix.

The metropolis at present does not need foodgrains, but it cannot get the peasants to move away from foodgrain production into producing the crops it needs, because the government procures foodgrains at assured, pre-announced prices. Reducing the domestic demand for foodgrains through compressing incomes of the working people via fiscal austerity, which is what the neo-liberal agenda entails, also does not help imperialism in this situation, because it only leads to a piling up of foodgrain stocks with the government without reducing foodgrain output and changing the pattern of land-use. What imperialism needs therefore is a total abolition of this system of price-support, and, additionally, an alternative mechanism to influence the crop-growing decisions of the peasantry.

The three farm laws enacted by the Modi government, which promotes imperialist interests behind its “hyper-nationalist” rhetoric, were meant precisely to achieve this. They were to usher in corporatisation of agriculture that would have ipso facto established metropolitan control over land-use: the corporates would have got peasants to grow those crops for which they got the right market signals, which means making land-use in the third world adjust to metropolitan demands. Imperialism used every means to achieve this end, including getting its camp followers in the academia and the media to tom-tom how good it is for the peasants not to be supported through government price-support. But it failed.

The stout resistance put up by the peasants against the three laws ultimately made the Modi government capitulate. But a mere withdrawal of the laws does not automatically ensure a restoration of the status quo ante; and the importance of maintaining the minimum support price regime which the peasants want now to be a legal enactment arises precisely for this reason. Even if, after the repeal of the three laws, foodgrain marketing can occur only in specified locations as before, namely the mandis where government agents can oversee the entire process, there is nothing to ensure that the peasants can get a minimum price to cover their costs and give them a certain profit, unless the MSP regime continues.

In other words, while allowing foodgrain marketing in locations other than mandis (so that government supervision can no longer be exercised), implies that the MSP cannot be enforced even if an MSP continues to be formally announced, the converse is not true: making government supervision mandatory (which the repeal of the laws would ensure) does not ipso facto bring back an MSP regime. An MSP regime has to be specifically kept in place. The peasants are demanding a legal enactment for this, so that the government cannot wind up such a regime whenever it likes.

This becomes particularly urgent because of the all-too-familiar chicanery of the BJP government. Even when it formally repeals the three farm laws, it can still continue its attempt to achieve the same ends by other means.

But as long as such nefarious activities can be kept at bay, the peasants have won a crucial battle: the battle of keeping the substantial tropical and subtropical land mass of the country away from the control of imperialism. And two features of this victory deserve special attention.

The first is linked to the fact that neo-liberalism greatly restricts the scope for mass action by splitting people into atomised elements, and preventing, through the control it exercises over the media and the academia, the build- up of any significant social support for such action. It is notable that, in this entire era, the masses have generally opposed neo-liberal measures not through direct action, such as prolonged strikes or gheraos, but through indirect political means, by building up alternative political movements for capturing political power, as in Latin America. And governments opposed to neo-liberalism, when they have come to power, have faced immense hurdles, from foreign exchange crises to sanctions imposed by imperialism. Many such governments have even buckled down because of these hurdles.

It is in this context that the kisan movement in India marks a departure: while it used the political threat, of working against the BJP in the coming elections, it resorted to direct action, which is an extreme rarity under neo-liberalism.

The second is the length of the direct action by the peasants. They camped on the borders of Delhi for one whole year. Future researchers will no doubt unravel how exactly they were able to achieve this stupendous feat. But it is a feat that needs to be celebrated.