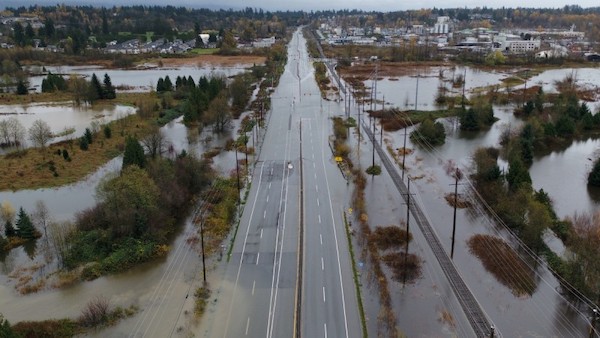 Flooding in British Columbia last week caused extensive damage in the Lower Mainland of the province, including along major roadways like Highway 11, pictured here. (Photo courtesy BC Ministry of Transportation/Flickr)

The massively destructive flooding that just struck British Columbia will likely constitute the “most expensive natural disaster in Canadian history.” It will clearly take months to restore vital transport routes and infrastructure. More disturbingly, this climate change event has exacted a terrible human price. While the death toll is as yet unclear, some 18,000 people have been displaced in BC, according to federal Public Safety Minister Marco Mendicino.

The floods came on the heels of the recent COP26 gathering in Glasgow which failed to take meaningful action and represented “a cruel joke and a slap in the face to the communities most affected by the climate emergency.” It was almost as if nature itself were issuing an embittered comment on the steadfast determination to put profits ahead of the preservation of life that had been displayed in Glasgow.

The failure of global capitalism and its political enablers to address carbon emissions will ensure that climate change unfolds along even more catastrophic pathways than is already quite inevitable. However, there is another side to the question which also demands the most serious attention. As climate impacts intensify, it is essential that we develop a far greater capacity to respond to extreme weather events, so as to keep communities safe and to recover from them as rapidly as possible. This is most urgent in poor countries but, even in a place as rich and historically privileged as Canada, it is clear that no serious preparations are in place for the disruptions and destruction ahead.

After hundreds of lives were lost to massive flooding in Germany earlier this year, a scandalous lack of emergency planning was brought to light. As the BC flooding escalated, the provincial government tried to deflect blame, just as German officials had done, by suggesting that “emergencies such as flooding and mudslides start at the local level.” However, local authorities do not command the resources and response capacities that will be required in the era of climate disaster. This is a very major question since, as one expert in disaster planning has put it,

Climate change is like a heat-seeking missile. But instead of being attracted to the heat signature of an enemy’s aircraft, it seeks out marginalized people and communities.

The failure to adequately prepare for what are now quite predictable extreme weather events is epitomized by a dreadful incident that occurred during the recent events in BC. With a local pumping station on the verge of failing and, with lives at risk on a huge scale, the City of Abbottsford had to take to social media to urge people to evacuate. In this dire situation, the provincial warning system, which could have reached all cell phones and cut into TV and radio broadcasts, was not utilized. This was due to a prior bureaucratic decision that only tsunamis would be considered catastrophic enough to activate the provincial system.

Of course, the flooding in BC was not the province’s first taste of the severe impacts of climate change. The summer’s heatwave and wildfires were still fresh on everyone’s mind. Yet NDP Premier John Horgan made the unlikely claim that “I think all British Columbians fully understand that now we have to better prepare for events like this. But we couldn’t have even imagined it six months ago.”

Horgan made this statement despite the fact that his government sits on numerous reports and studies that clearly contradict his claim to have been taken by surprise. One of these was drawn up by the provincial auditor general in 2018 and it suggested that “the provincial government was not adequately managing the risks posed by climate change, and that key climate-driven risk areas, such as flooding and wildfires, required additional attention.” This last response by Horgan was less callous but no better informed than his infamous assertion, in the face of heat deaths during the summer’s bout of extreme weather, that “fatalities are part of life.” 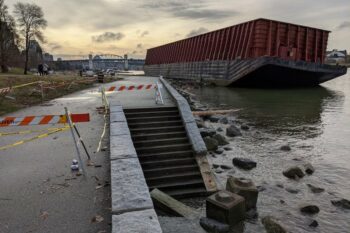 Immediate and well deserved attention is focused at the moment on the failings of the BC government but it would be entirely wrong to suggest that these shortcomings are unique. There is no reason to believe that other provinces are any better prepared or that robust preparations are underway at the federal level. A report in 2016 warned that “Canada is ill-prepared for the increased flooding and extreme weather that will occur under climate change.” In June of last year, another major report was issued that pointed out how vulnerable Canada’s infrastructure is in the face of the “deep and lasting impacts” of climate change. The calculated negligence when it comes to acknowledging the science and preparing for what’s in store manifests itself at every level of government across the country.

While those who hold political power drag their feet when dealing with the causes and impacts of climate change, it is instructive to consider the circumstances in which they demonstrate that they are perfectly capable of taking swift and decisive action. Indeed, when it comes to protecting fossil fuel interests, supporting corporate profits, furthering resource colonialism and crushing Indigenous resistance, their alacrity was fully on display in BC.

Even as the flooding took its toll, the RCMP made multiple arrests as they moved against the Coastal GasLink pipeline blockade that the Wet’suwet’en had established to protect their territory from invasion and environmental destruction. The Gidimt’en Checkpoint Facebook page puts things starkly and clearly:

In the middle of a climate emergency, as highways and roads are being washed away and entire communities are being flooded and evacuated, the province has chosen to send busloads of police to criminalize Wet’suwet’en water protectors and to work as a mercenary force for oil and gas.

If resources had to be diverted from emergency response to arresting people, it would have been fairer to have focused on those who have contributed to the catastrophe, rather than targeting Indigenous people protecting their traditional territory. In this regard, some high placed representatives of the logging interests would have been a solid choice. Their complicity in rendering large swathes of BC far more vulnerable in the face of major flooding is entirely clear. Ross Muirhead, founder of Elphinstone Logging Focus (ELF) noted,

The bottom line is that our landscapes have become less resilient to handle these new heavy rainfall events due to human-caused disturbances such as clearcut logging and the associated road building—which has resulted in a huge-fold increase in surface runoff conditions.

We really shouldn’t be in the slightest surprised that such scant attention has been paid to preparing for the inevitable impacts of climate change or that governments have other priorities that are dictated by the needs of capitalist profit making. The global pandemic has provided an object lesson in just how those priorities play out. Again and again, we have seen governments in Canada do too little too late when it comes to the preventive measures needed to protect public health. Profits have consistently been put before the preservation of human life, even though the evidence is clear that suppression strategies are far more effective than half-hearted and reluctant efforts to mitigate the spread of the virus. The intensifying climate crisis will make such skewed priorities even more lethal and destructive than they have been during the pandemic.

Left to their own devices, those in power will fail to draw up the plans, allocate the resources and take the measures necessary to protect their populations. Poorer countries will clearly be the hardest hit by the destruction wrought by climate change, and in wealthy countries, it is poor and racialized communities that will suffer the most.

As I write this, media reports warn of another extreme weather episode likely to bring major flooding. This time it is Canada’s east coast that is at risk. It is clear that the struggle for climate justice can’t be limited to demands to curtail carbon emissions and other harmful activities. We are going to have to take action—in our workplaces, in our communities and in the streets—to ensure that events like the one in BC do not catch us unprepared and that the poor and vulnerable are not abandoned in the face of the climate crisis.

John Clarke is a writer and retired organizer for the Ontario Coalition Against Poverty (OCAP).