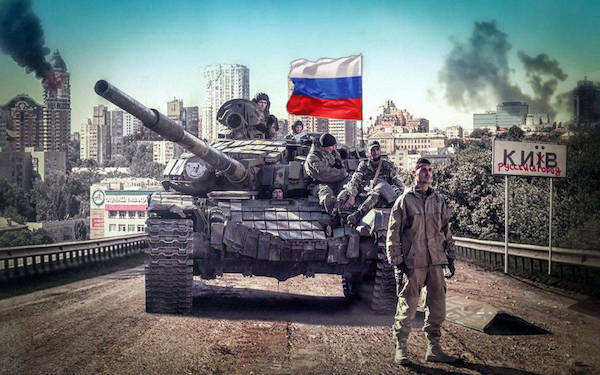 The Foreign Intelligence Service of the Russian Federation (SVR) has denounced the way in which the United States is trying to make people believe that Russia wants to attack Ukraine, while at the same time Washington is pushing Kiev to restart the Donbass war.

The head of the SVR, Sergey Naryshkin, told a journalist from the Rossia 1 channel that behind the reports that Russia is preparing to invade Ukraine lies Washington’s desire to push Kiev to attack the Donbass.

The head of the SVR was also keen to deny reports that Russia wants to invade Ukraine. He said that the United States was pushing Kiev to attack the Donbass by spreading rumours about an alleged Russian invasion of Ukraine.

“I have to reassure everyone that nothing like that will happen. […] In general, everything that is happening now around this issue is, of course, a malicious propaganda action by the U.S. State Department. The State Department is injecting these fakes, these lies to its allies, to the heads of the media and to the heads of the political centres in the United States so that they multiply and multiply and multiply these lies. And they have built a big bubble around it,” Naryshkin added.

And the injection of all this war hysteria around Russia and Ukraine is not only taking place in the media, but also through diplomatic channels, as the SVR press service said today.

According to the SVR, “the Western diplomatic corps in Ukraine has reportedly seen an increase in U.S. activity aimed at gaining support from European allies to contain Russia“. It adds that “the tone of this dialogue is tougher“.

And to sow hysteria among Western countries, the United States can count on the help of the British, who are not to be outdone in terms of Russophobia.

“In particular, a meeting of representatives of EU diplomatic missions in Ukraine was held in Kiev in mid-November this year, attended by senior U.S. and British diplomats. Emissaries from Washington and London tried to create panic by continuing to manipulate false information about the imminent full-scale invasion of Ukraine by Russia and the subsequent occupation of Ukrainian territory by Russia. They insisted that EU countries should adopt a united approach. According to the American and British interpretation, this is the only way to save the Russophobic regime in Kiev,” says the SVR press service.

At the meeting, the U.S. and Britain also called on European countries to supply energy to Ukraine, trying “to impose on the EU the costly responsibility of maintaining the viability of the Ukrainian economy amidst Ukraine’s unprecedented corruption, decaying energy infrastructure and rising energy prices“. EU countries thus find themselves “responsible for ensuring that Ukraine does not lose its economic resilience during the upcoming harsh winter“. As if the current energy crisis was not already a real quagmire for the EU countries, now they have to keep the Ukrainian Titanic afloat…

The problem is that “the EU states, which are themselves facing serious problems, do not want to feed the corrupt Ukrainian authorities“, because “Europe currently sees no prospect of Ukraine becoming a civilised and predictable partner“, says the SVR statement.

Moreover, the European diplomats “are aware that the Americans and the British are artificially fanning the flames of hysteria in order to present Russia as the culprit for all the problems if the adventurers in Kiev attack the Donbass“, while they “note that the Ukrainian authorities are themselves provoking tensions in the regions of Donetsk and Lugansk“.

In other words, the European countries are not very keen to open their wallets, and even less so to go and fight for Ukraine against Russia.

And while the United States maintains the hysteria around a hypothetical invasion of Ukraine by Russia, Kiev continues to fuel the escalation in the Donbass. On 30 November 2021, for example, a civilian was injured in the Petrovsky district of Donetsk, DPR (Donetsk People’s Republic), as a result of Ukrainian army small arms fire.

The 34-year-old man was shot in the left thigh and taken to hospital in an extremely serious condition. The man, who is disabled from injuries sustained in 2015 in his own backyard from Ukrainian army mortar fire, received a gunshot wound, has a multi-dislocated open fracture of the lower third of his left femur, and is in shock. For the moment doctors do not know if they will be able to save him.

On the same day, the Ukrainian army made another attempt to carry out a terrorist attack using drones against the village of Sakhanka in the south of the DPR.

Fortunately, the anti-aircraft defence forces of the People’s Militia prevented the two drones sent by the Ukrainian army from reaching the village. One of the two drones crashed behind the front line, but the second one fell on DPR territory. It was recovered, and like the drone of 24 November in Donetsk, this one was carrying an explosive charge with metal elements, in order to maim as many people as possible who might have been nearby.

While the United States maintains media hysteria by screaming about imaginary invasion of Ukraine by Russia, Kiev continues to reignite the conflict with war crimes and terrorist attacks against Donbass civilians. These are the facts that this shameless American propaganda is trying to conceal with disinformation and hysterical accusatory inversion.