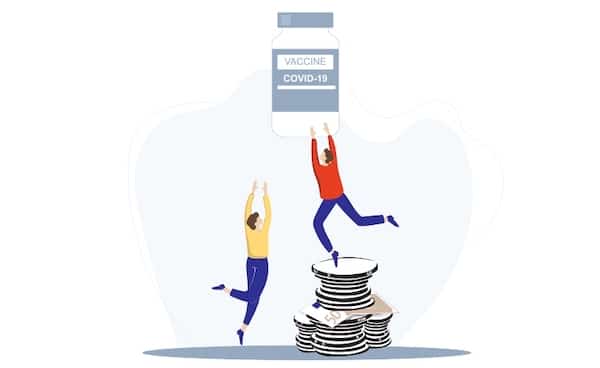 When, earlier this year, the Biden administration made some supportive noises with regard to a vaccine patent waiver, there were some hopes that this might lead to meaningful global vaccine distribution. Sadly, however, White House statements and concrete initiatives are far from the same thing and the hopes were generated have been cruelly dashed. As the months have dragged by, Western political leaders, including Biden, have done nothing to seriously challenge the profit interests of Big Pharma and ‘vaccine imperialism’ has continued, with populations in poor countries obtaining pathetically inadequate levels of immunisation in the face of the pandemic.

In this situation, the world now faces the onset of the horribly predictable Omicron Variant. It must be acknowledged that the level of threat posed by this new strain is still unclear. Its existence was announced to the world after it was detected in South Africa on November 23 and the health minister there believes ‘it is behind an exponential daily rise in COVID-19 cases across the country in recent days.’ It’s therefore likely to be highly contagious and to spread rapidly on an international basis. How harmful and lethal it will be, compared to long established variants like Delta, is not yet established.

Omicron has a ‘very unusual constellation of mutations,’ with more than 30 of these ‘in the spike protein, the part of the virus that interacts with human cells.’ This could enable it to ‘bypass our immune systems, make it more transmissible and less susceptible to treatments.’ There are obviously huge concerns over the extent to which the variant may be able to overcome the protections currently provided by the vaccines but it may be some weeks before the extent of this danger is properly understood. The latest indications from South African researchers, however, do seem to suggest a partial ability to ‘get around some immunity but vaccines should still offer protection against severe disease.’

It must also be stressed that, the immediate spate of headlines declaring a ‘South African Variant’ notwithstanding, Omicron’s place of origin is significantly in doubt, with cases detected in the Netherlands before those in South Africa. Indeed, the situation is sufficiently murky that ‘It’s unlikely we will ever know precisely when or where Omicron first emerged.’ This is no small matter, precisely because ‘The U.S., Canada, the UK and the EU have all restricted travel from southern Africa amid concern over the new variant.’ UN Secretary General António Guterres has been deservedly critical of this isolation of several African countries, pointing out that “the people of Africa cannot be blamed for the immorally low level of vaccinations available.”

This comment rather gets to the heart of things. Wherever variants may emerge, the vulnerable and unprotected people of poor countries, especially in sub-Saharan Africa, are to be punished when the virus takes hold among their populations. In the UK, 69% of the population are fully vaccinated, while only 24.4% of South Africans are in that situation. However, across Africa as a whole, the situation is far more grim, with only 6% of the population fully vaccinated.

Most of the political leaders of the G7 countries, including Boris Johnson, have adamantly opposed calls for a patent waiver and continue to defend the ‘intellectual property rights’ of Big Pharma whatever the human cost. Yet Johnson, who allows refugees to drown in the Channel and responds to climate change with grandiose and ignorant warnings on the threat of immigration, is one of those leaders who is ready to make southern Africa pay the price for the lack of vaccine protection he and others like him are responsible for.

The harsh truth is that we live under a system of global capitalism that is prepared to deny basic health protections to the poorest countries in the midst of a pandemic and to then isolate them, with devastating economic consequences, when the virus inevitably spreads among their populations. For Africa, the colonial domination of the 19th Century has changed shape but its fundamental features are still there to see during the global pandemic that is now unfolding.

It is hard to feel much sympathy for worried market traders and major corporations, when the lives of so many people across the world are put at risk by the spread of the new variant. However, the implications of the economic damage that is threatened by a major new wave of the pandemic will also mean hardship for working class people everywhere. Clearly, this threat is very real, with the Organisation for Economic Co-operation and Development (OECD) warning that Omicron could unleash ‘a severe global slowdown.’

This situation reveals a great irony, in that the vaccine imperialism approach isn’t just monstrously callous but is actually doomed to fail on its own terms. It couldn’t be more obvious that leaving a vast section of the world’s population unvaccinated can only create the basis for the virus to spread and mutate. The ongoing threat of something like Omicron is the product of this course of action and it is unlikely to be the last variant that it generates. The desperate hope ‘that Covid will evolve to become a milder disease,’ and that it will suffice to limit serious vaccination efforts to the populations of rich countries, is simply not grounded in reality.

Yet, a major drive to ensure equitable and comprehensive vaccination measures is entirely possible. It has been calculated that ‘only 43% of the global production capacity for COVID-19 vaccines is currently being used for the production of approved vaccines.’ By ‘Lifting patents and sharing technology on a mass scale,’ a global drive to vaccinate populations that are presently abandoned to the spread of deadly variants, could be set in motion in a matter of a few months.

Hundreds of millions of lives are placed at risk because ‘Pfizer, BioNTech and Moderna have used their monopolies to prioritise the most profitable contracts with the richest governments, leaving low income countries out in the cold.’ On this basis, it is estimated that these companies ‘are making combined profits of $65,000 every minute.’ A report issued Oxfam spells out starkly the criminality that is at play here:

Despite receiving public funding of over $8 billion, the three corporations have refused calls to urgently transfer vaccine technology and know-how with capable producers in low- and middle-income countries via the World Health Organisation (WHO), a move that could increase global supply, drive down prices and save millions of lives.

Still, it would be wrong to imagine that this horrible situation is simply attributable to the inhumanity of a few pharmaceutical companies, however monstrous their conduct may be. The whole course of the pandemic has laid bare the inability of capitalism to put human need before short term profits. Last year, the British Medical Journal spelt out clearly the scientific case for pursuing a course of ‘elimination,’ as opposed to ‘mitigation,’ in the face of the pandemic. Yet, since that time, we’ve seen Boris Johnson’s preposterous ‘Freedom Day’ and an international array of such reckless and harmful efforts to disregard reality so as to keep the cash registers jingling.

Over the next few weeks, we’ll learn just how much of a price must be paid in death and suffering for the preventable emergence of the Omicron Variant. However it plays out, though, we are living a world where the threat of further variants hang over us. Indeed, it is acknowledged by entirely mainstream and impeccably cautious bodies that we have entered a ‘pandemic era.’

In line with the principles of international solidarity and, on the basis of our common interests, we must challenge the ‘intellectual property rights’ of Big Pharma and demand that the technology and know-how that can save millions of lives be pried from their grip. However, the vaccine imperialism we are confronting is but one manifestation of capitalism’s inability to create a sustainable relationship with nature, at terrible cost to people across the planet. Addressing this will require changes that are far more sweeping and fundamental than a patent waiver.

John Clarke became an organiser with the Ontario Coalition Against Poverty when it was formed in 1990 and has been involved in mobilising poor communities under attack ever since.