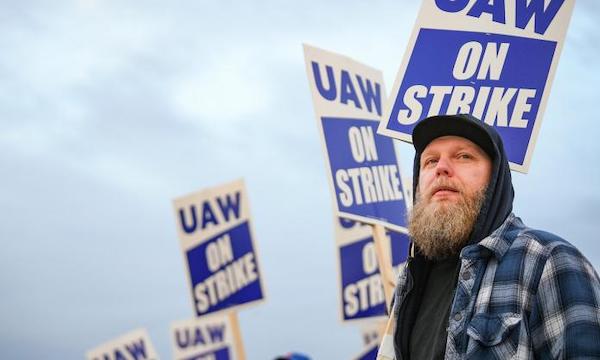 Workers at Deere, a farm machinery company, on the picket line in October. (PHOTO: AP)

More than a year after mass protests for racial justice took centre stage in the United States with the enormous, multi-racial Black Lives Matter movement, American politics is experiencing a dramatic shift to the right.

Whatever hopes there were for a reforming Biden administration seem crushed. The president’s only achievement is the passage of a piddling $1.5 trillion infrastructure bill, whittled down from an original $6 trillion, which is less ambitious than many of Trump’s infrastructure plans.

Across the board, local elections have produced large swings to the Republican Party. Biden won the state of Virginia in last year’s presidential election by 12 percentage points. Fast forward a year, and a Republican candidate, Glenn Youngkin, endorsed by Donald Trump and waging a culture war against trans people and against anti-racism curricula in schools, won the governorship. In New Jersey, the election for governor was extremely close. Last year, Biden won the state by 16 points, now the Democratic candidate is hanging on for dear life with a 2-point win.

“It’s an indication of the failure of the Biden presidency”, Geier explains. The Democrats, he says, have relied on a three-pronged electoral strategy that has proven worthless. First, they employ cynical identity politics by running diverse candidates. But two can play that game; Youngkin in Virginia ran alongside two women of colour. Second, the Democrats have been posing as saviours of democracy against Trumpist attacks on the vote. Finally, the Democrats hoped to appeal to the wealthy middle-class suburbs and have turned away from working-class voters.

“The strategy ignores issues that affect people the most, like the declining standard of living or the totally inadequate health system, and allows the Republicans free rein to campaign on the economy”, he says. For Geier, this declining economic situation is a far more important driving force in recent elections than the culture wars over Critical Race Theory and defunding the police.

“Biden comes in and the standard of living goes down”, he says.

We now have 6 percent inflation and real wages are down … So for many people, their standard of living has declined, and there’s been a shift either to the Republicans or not voting. In the Black belt [the areas with a high proportion of African Americans in the southern states], voter turnout is down. The economy is a much bigger part of this election than the Democrats are prepared to deal with.

A year after his election, many people are already disillusioned and frustrated with the Biden administration, says Sherry Wolf. The recent election results are “conditioned by the wider non-battles, non-fights and bipartisanship that seem to have taken hold in Congress and the White House”. Take what was supposed to be Biden’s multi-trillion dollar “Great Society” plan, intended to earn him a place in the history books next to Franklin D. Roosevelt and Lyndon B. Johnson.

“It wound up being essentially Trump’s stripped-down infrastructure deal for about a trillion dollars”, Wolf says.

So all of the goodies being talked about—climate initiatives, free tuition, debt cancellation, paid family and medical leave—none of these things are included in the final deal. Even if people didn’t know the specifics, they knew that there was a bunch of horse-trading going on that was completely unintelligible and utterly uninspiring.

Geier points to how rapidly the Biden administration dropped some of its more popular election promises: the $15 an hour minimum wage, voting rights legislation, progressive immigration reforms and defunding the police. “They dropped everything”, he says. Biden has even maintained the Trumpian corporate tax rate at 21 percent.

He says this is all to be expected. The Democratic Party is “not a radical left party that has betrayed its roots. It is a capitalist party that has a hard time delivering even the mildest reforms when capital says no. That’s what its internal divisions are about”, Geier says. He’s referring to right-wing Democrats such as Kyrsten Sinema and Joe Manchin. They helped block progressive aspects of the recent bill and play an important role in moderating any legislation Democrats try to pass.

But does the shift to the right in official politics reflect a shift to the right in the general population, a large portion of which doesn’t vote? “What you have is a continuous polarisation, a falling away of the middle, which is why these utterly milquetoast conservative Democrats get such a yawn”, Wolf says.

For Wolf, it’s not that a progressive vision is being rejected for a right-wing one. “If anything”, she says, “people are disaffected from the institutions of American capitalism on a wide scale”. The deaths of around 800,000 people during the pandemic condition much of this sentiment. “This government and so many of its institutions failed so colossally and publicly, and in such a deadly manner over the last twenty months”, she says.

Who thought that basic structures that bill themselves as the most advanced society on the face of the planet, couldn’t keep you alive and fed and educated about your health needs?

According to Geier, the Republican Party itself has moved dramatically to the right in the past few years to accommodate a growing far right in the country. “Trump owns the Republican Party”, he says. “Some of these Republican figures would be on the far-right edge of Marine Le Pen’s party in France.” Most Republicans openly supported the far-right vigilante Kyle Rittenhouse, who met Trump days after he was acquitted. One Georgia Republican, Marjorie Green, has proposed awarding Rittenhouse the Congressional Medal of Honor.

One of the most alarming aspects of this radicalising right is the savage attacks on abortion rights, including in Texas, where abortions are now illegal after six weeks of pregnancy. The Texas laws have “created something totally bizarre and utterly American—there’s now a bounty on the head of anybody who helps someone get an abortion”, says Wolf. The attacks are the result of the chiselling away of abortion rights over decades by both Republicans and Democrats, the latter constantly making concessions to anti-abortion politics.

Wolf places the blame at the foot of the liberal institutions, from the Democratic Party to the National Organization of Women and even the Democratic Socialists of America (DSA), the largest left group in the country. “We’ve been told for decades that if we just elect Democrats and they hold on to the Supreme Court, then that’s what stands between us and the barbarians”, she says.

But without the kind of mass movement that won and defended abortion, and the clinic protests that shut down the far right in the 1980s and 1990s, we are now seeing the evisceration of abortion rights and reproductive health.

Wolf and Geier are both scathing about the approach of the DSA, which has been pursuing a strategy of endorsing and campaigning for various Democratic candidates, with a view to taking over the party. This strategy, commonly referred to as “realignment”, has failed historically and ignores the ability of the Democratic establishment to crush and discipline left-wing challengers. Wolf points to the recent humiliating defeat of a DSA-backed candidate in Buffalo, New York, who was beaten by a moderate write-in candidate endorsed by the Democrat corporate establishment that, according to Wolf, is “terrified of having anything shake the status quo”.

From the recent defeats, much of the DSA leadership is drawing what Wolf calls “unhealthy conclusions”: that they should moderate their message to appeal to people who formerly voted for Trump.

Geier says that the left-liberal candidates endorsed by the DSA are sensitive to right-wing attacks because their only focus is on getting elected. “They can’t stand up to them.” As an example, he raises Nina Turner, who campaigned in the August Democratic congressional primary in Cleveland, Ohio. She was the chairwoman of Bernie Sanders’ campaign. She joined the DSA at the start of her campaign to gain access to hundreds of volunteers. When she was attacked by the right and the media, she couldn’t defend the more radical things she had said, her attacks on Biden or the “defund the police” slogan. So she publicly retreated from all those positions.

“All these Democrats who said left-wing things during BLM, they are for left-liberal ideas when they’re popular, and when they’re not popular they can’t defend them”, Geier says.

Despite the undoubted shift to the right in official politics and the failures of the largest left organisation to lead a real fightback, both Wolf and Geier say that a shift to the left has been taking place in society at large. There was widespread, resounding support for the Black Lives Matter demonstrations last year. Some polls even showed majority support for burning down police stations. There are also more subtle changes going on. “There’s a cultural shift going on about progressive ideas. A good chunk of the population isn’t going to church any more, and you have evangelical kids who are for gay marriage and transgender rights”, Geier explains. Social democratic ideas have become more popular than they’ve been in decades, from taxing the rich to universal healthcare.

More recently, Geier says, there has been a “shift in working-class reality and consciousness”. He is referring to the dual phenomena of “Striketober” and the “Great Resignation”. In the last six months, 20 million people have quit their jobs, and there has been a small uptick in strikes, although low unionisation rates mean most of this sentiment is being expressed individually. Wolf calls it “class struggle aspirationism”—people want to fight, but there are few organisations trying to lead this mass sentiment.

High employment rates alongside soaring inequality and inflation are undermining some long-held beliefs of the American working class. Geier summarises the lessons that workers are drawing:

First, the boss needs you, you don’t need the boss. Second, they cannot outsource your job to China. Third, if you lose your job, you won’t get a worse one, you’ll get a better one.

For decades, workers have been taught to believe the opposite. What’s more, there is mass support in the population for strikes and unions. A recent Gallup poll put public support for unions at 65 percent, a twenty-year high. Talk of unions and strikes has become mainstream. “Turn on the regular news, and you’ve got reporters going out on the picket lines and cheering on striking workers. Striking workers have not traditionally been put up as heroes in this country”, Wolf laughs.

That’s indicative of the accumulation of grievances and the class divide.

Both Wolf and Geier see cause for hope in the potential for struggles to break out. “It all feels very volatile in this country right now”, Wolf remarks. There’s a crucial difference to the Trump era, she says.

Everything is churning under a Democrat who people were hopeful would deliver much more than he is doing. And people have a very recent memory of making a stink in a collective way and winning something. All the establishment institutions are discredited, and struggle is not.