In May 2017, Nepal joined the BRI with a hope of obtaining long-term benefits through a myriad of projects. The line has already reached Xigaze (or Shigatse) in Tibet. In July 2020 the next secton of line in Tibet from Xigaze to was still in the planning stage, although China had reportedly commenced surveying work.

The SCMP reported that the railway project was among 20 bilateral deals signed during Chinese President Xi Jinping’s official visit to Nepal in 2019, aimed at improving infrastructure connecting the two countries. It is seen as an important part of China’s Belt and Road strategy in South Asia.

The US$8 billion cross-border railway–from Xigaze in south Tibet to Nepalese capital Kathmandu–is expected to boost the economy of Nepal, the second poorest country in Asia after North Korea.

Nepal decided to use the Chinese track standard gauge of 1,435mm for its railway system in a bid to reduce costs, rejecting the Indian 1,676mm broad-gauge. The original plan was for the Chinese construction to only go to the Tibet-Nepal border at Gyirong, but at the request of Nepal’s government, it was agreed that China would carry-out a feasibility study for constructing the railway through to Kathmandu. 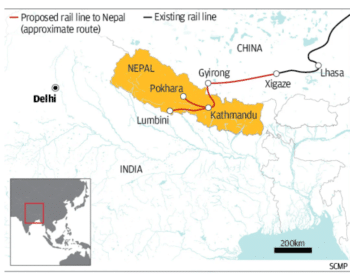 Meanwhile, China’s Foreign Minister Wang Yi, announced at the International Conference on Nepal’s Reconstruction in Kathmandu (December 7-9) that China will help landlocked Nepal boost connectivity via road and rail. China also promised support for rebuilding the country after the devastating earthquake of 2015 and urged closer cooperation under the Belt and Road Initiative.

Wang told the conference that China would progress the feasibility study for the final stage of the project, saying that the proposed cross-border railway would “improve the trans-Himalayan multidimensional connectivity network, and help Nepal realise its dream of changing from a ‘landlocked country’ to a ‘land-linked country’.”