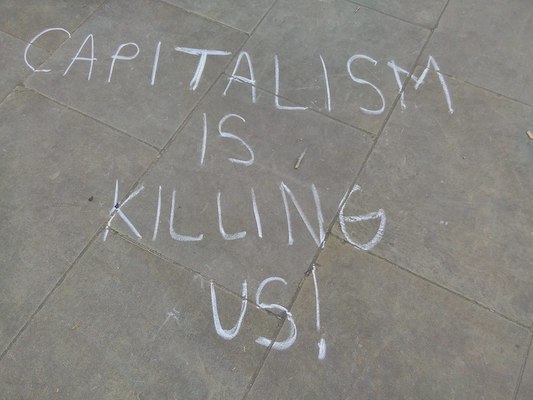 In the United States there are still four million persons who remain unemployed compared to before the pandemic; and yet the Biden administration’s attempt to stimulate the economy has already run into a crisis with the re-emergence of inflation not just in that country but elsewhere in the capitalist world as well. The Federal Reserve Board (the equivalent of the U.S. central bank) is planning soon to raise interest rates (that are currently close to zero), and even the fiscal expansion will be difficult to sustain in the face of inflation. All this will truncate the recovery that has been taking place. In other words, the ability of the State even in the leading capitalist country of the world, whose currency is “as good as gold” and which should therefore have no fears of any debilitating capital flight, to stimulate activity within its own borders, has become seriously constrained.

This is a new basic contradiction that has emerged in world capitalism and deserves serious attention. The prognostication of John Maynard Keynes, the most important bourgeois economist of the twentieth century, that even though capitalism in its spontaneity was a flawed system that kept large masses of workers unemployed, State intervention could fix this flaw, had already been negated by the globalisation of finance. Facing a nation-State, globalised finance had enfeebled that State sufficiently to prevent its intervention for overcoming the deficiency of aggregate demand. But the one State that still appeared to have the capacity to intervene was the U.S. State because its currency was considered even by globalised finance to be “as good as gold” and hence intervention by it would not trigger any serious exodus of finance. But now, it seems, even that prospect has vanished. Let us see why.

The reason why governments of other countries could not stimulate their economies adequately was because their fiscal policies were constrained by the condition imposed upon them by finance to restrict the fiscal deficits relative to GDP to a certain stipulated figure; their monetary policies on the other hand had to be tied to the monetary policy of the U.S.. Their interest rates for instance had to be sufficiently higher than the U.S. interest rate, for otherwise there would be serious financial outflows. Their hands, therefore, were tied, and this held even for advanced capitalist countries. The U.S., however, had a certain autonomy. Even if it ran a fiscal deficit exceeding that of other countries and even if it had close to zero interest rates, this would not trigger any serious financial outflows. The Biden administration proceeded on this assumption. There was however another fly in the ointment which has surfaced now.

Textbook economics tells us that low-interest rates stimulate private investment because they lower the cost of borrowing. This is certainly the case, but an even stronger route through which low-interest rates have operated of late has been through stimulating asset price bubbles. When the “dot-com bubble” in the U.S. collapsed at the beginning of this century, Fed Chairman Alan Greenspan lowered interest rates, which stimulated a new bubble, the housing bubble, in that country. This, by artificially boosting the wealth of many individuals, gave a boost to consumption expenditure, and also to investment in housing and other projects which ushered in a new boom.

The Fed’s low-interest-rate policy, in short, operated not just through its direct effect in lowering the cost of borrowing but also, significantly, by stimulating a speculative asset-price bubble, where a price of an asset rises many times more than its “true value”, i.e., what its discounted earnings over its life-time would warrant. This happens because while everyone expects the asset price to collapse eventually, those who hold the asset believe that it would rise for some more time. They hope to sell it within that time and pocket the capital gains. And this speculation-fuelled demand for the asset is aided if the interest rates are kept low.

But low-interest rates can encourage speculation not only in asset markets but also in commodity markets. And this is precisely what has been happening in the U.S., because after the collapse of the housing bubble speculators have become particularly chary of asset-market speculation. Speculation can arise not just in those goods which for one reason or another may be temporarily in short supply or where there may be temporary bottlenecks and whose prices, therefore, are expected to rise immediately; they would also arise in commodities where demand is inelastic (i.e., does not fall too much when prices rise) so that even if there are no supply bottlenecks, artificial scarcities can be profitably created. And demand becomes particularly inelastic when credit is easily available (for then people borrow to maintain demand).

Once such price increases occur, then the demand for wage increases follows, to compensate the workers for their real income losses owing to the price rise. Thus, a whole price-wage spiral can be started even when there are no major supply bottlenecks of any kind that threaten the boom. And once such an inflationary spiral has started, then the stimulation of the economy has perforce got to be halted, as is happening in the U.S. now.

Oil is an obvious candidate for such an artificial price-rise, and it is not surprising that petrol prices in the U.S. for November 2021 were higher than those for November 2020 by as much as 58 per cent, which was the highest for any month since 1980. The increase in 1980 had come when the second oil shock had happened; the current rise in oil prices however has occurred without there being any price-hikes administered by the OPEC countries. In fact, the U.S. administration has been considering using its own oil stock-pile to keep down oil prices.

Commodity speculation has generally been ignored in economic policy-making in advanced capitalist countries. It is taken for granted that low-interest rates would stimulate aggregate demand through causing asset price bubbles and possibly through directly raising investment by lowering borrowing costs; the fact that low-interest rates could also encourage commodity speculation so that the ensuing price-rise could lead to a lowering  of aggregate demand instead of raising it has scarcely been recognised. And yet this is now emerging as the consequence of a low-interest rate policy, which would make any  state intervention for raising the level of aggregate demand that much more difficult.

International finance capital objects to fiscal intervention by any government for stimulating demand, though it is more tolerant of intervention through monetary policy, for that works through the decisions of the capitalists and hence does not have the effect of delegitimising the system by bypassing the capitalists. But if monetary policy too becomes infructuous, even in the U.S., since it gives rise to inflation long before the system has run into any major supply-side bottlenecks, then the system is left with no instruments for reviving activity and overcoming mass unemployment.

Till now monetary policy was considered at worst to be a blunt instrument. When even with a close-to-zero interest rate there was not much revival of investment, many had argued that the interest rate should be pushed into the negative region; this would have been difficult to sustain in any case, since any financial system that charged negative interest rates to would-be investors, cannot keep on paying positive interest rates to the depositors. The latter rates too would have to be negative, in which case however there is no reason why anyone should deposit any money with any financial institutions instead of just holding cash.

But it turns out that quite apart from the ineffectiveness  even of a near-zero interest rate in stimulating investment, it also has the effect of giving rise to inflation via commodity speculation. That basically leaves the capitalist system under the hegemony of global finance without any instrument for stimulating aggregate demand, even in the leading capitalist country.

The persistence of unemployment keeps the profile of real wages in the world economy almost stagnant, even as the profile of labour productivities rises internationally, raising the share of economic surplus in world output and thereby pushing the world economy into an even deeper crisis of over-production. If at the same time no instruments are available for raising the level of aggregate demand, i.e., for countering the crisis, then world capitalism gets doomed to a state of perennial mass unemployment, which can only undermine its political stability. The implications of such a state of affairs for economies like India are immense and profound.