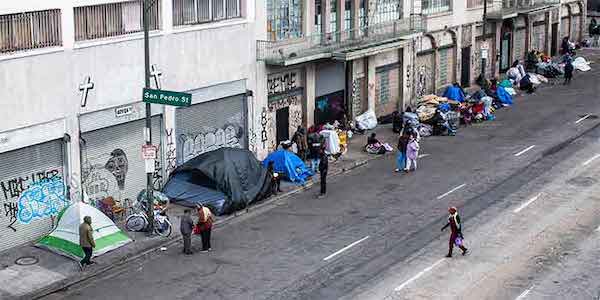 Recently on December 15 Eli Saslow wrote a very important feature in The Washington Post on the daily routine life of an elderly police constable Lennie who has been charged with the responsibility of evicting those families or persons from their homes who have not been able to pay their rent.

Essentially his daily duty during the last two decades has been to go from house to house, based on a list of those households who have lagged behind in rent payment, carrying a gun as well as handcuffs, and evict them. Astonishingly, this single police constable has evicted 20,000 Arizonans from their homes over a period of 2 decades, or 1000 per year, or about 3 per day.

He is under instructions to complete an eviction in 10 minutes flat. His routine is to knock on a door unannounced, tell the household members to find whatever they can carry within 10 minutes (while making arrangements later with the landlord to collect other belongings). He generally follows his watch and his aim is achieved within the stipulated 10 minutes. This aim is achieved regardless of the fact that there are small children in the evicted household, or whether those being evicted have serious problems including suicidal thoughts. An eviction ends with a change of locks.

It is not that Lennie does not have feelings for those whom he evicts so routinely. Sometimes he offers stickers to children of the family he is evicting, less frequently he may delay the eviction a bit. In fact once in his own life, when his side-business collapsed, he too was pretty close to suffering a similar fate of eviction but somehow survived. He has to put up with desperate evictees calling him a monster or worse. However he has so re-arranged his sensitivities  that he simply goes ahead to complete his daily quota of evictions.

His work had mostly stopped or reduced considerabbly due to the checks placed on evictions in COVID times, but as these are gradually being phased out he has become busy again in carrying out evictions.

He is by no means the only persons doing this. According to the Evictions Lab, Priceton University, the average number of eviction cases in a typical year in the USA is 3.7 million per year, or about 10,000 per day, or about 420 per hour, or about 7 per minute. In the case of most evictions, proceedings are biased against those facing evictions as landlords and owners have access to legal counsel while those facing evictions do not generally have such help. A large number of people face a temporary period of homelessness before they can move in with a  friend or some relative, or start livng in their car ( if they have one), or a shelter, or become homeless in a more vulnerable and open way.

When the pandemic struck, millions of people lost their jobs or side-jobs and their income was reduced. Hence there was a much higher chance that they will not be able to make their rent and mortgage payments. A big surge in evictions was therefore much feared. Helped by activists there was a campaign for checking evictions. This had two good results. Firstly, a moratorium on evictions was announced and extended from time to time. This did not lead to a complete ban on evictions but evictions were considerably reduced instead of going up. Secondly, the government announced grants for rent-relief. Unfortunately these were rather poorly implemented and failed to reach many. The moratoriums are now in the phase of ending, more or less.

So the fears of a big rise in the number of evictions which had been raised at the beginning of the pandemic are back now, even though the latest pandemic news is also worrying. In recent reviews it has been pointed out that the rent assistance funds of several states are also running out and so the authorities may not be in a position to protect tenants from evictions. Hence the demand of bringing back checks on evictions and increasing relief funds are again gathering support but it is still known how responsive the government and courts will be to this.

Moratoriums are ending at a time when it is still not possible for most of the adversely affected families to find the money to avoid eviction. Even in ordinary times this is not easy. A family may add up its dues and somehow collect the sum of, say, $2500 needed to make the due payment. When they take the money, they are told that as per the calculations on the landlord or owner side, including the fines for delayed payment, they have to pay perhaps double this amount.

In such a situation, many threatened households are unable to avoid eviction despite making their best and sincere efforts. Hence the tragedy of thousands of such households being pushed out of their home every day in one of the richest countries has continued year after year.

It is also not clear why there are so many reports of rents being raised in arbitrary ways to a significant extent at a time of such a serious housing crisis for a very large number of people. Yet another important issue is why there are so many people who face a very precarious situation in terms of rental housing and for whom rent or mortgage payment is an exceptionally high part of their total income.

This raises very basic questions about the injustices of capitalism, and insensitivities the entire system develops towards such extreme sufferings and indignities which are administered, inflicted as a matter of routine. In the report by Eli Saslow, there are several moving pictures, but one that simply refuses to go away from mind is that of a young mother faced suddenly with eviction, her 3 year son clinging to her leg.

Bharat Dogra is Convener, Campaign to Protect Earth Now. His recent books include, “Protecting Earth for Children,” and “Man Over Machine—A Path to Peace.”