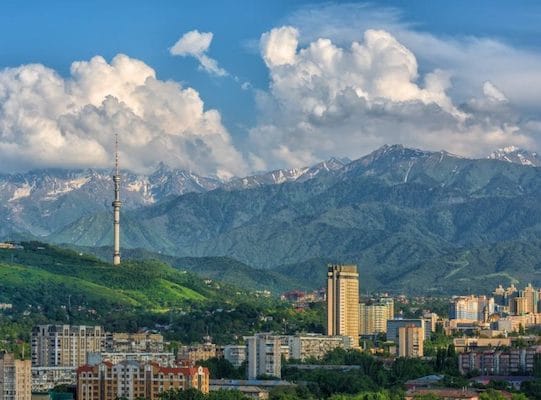 A Pentagon-funded bio-lab near Almaty, Kazakhstan, has become focus of attention for its research on “dangerous pathogens”

The Kazakh Ministry of Health issued an innocuous disclaimer today denying social media reports about the seizure of a “military biological lab near Almaty by unidentified people.”

According to Tass news agency, the social media had speculated that specialists in chemical protection suits were working near the lab as “a leak of dangerous pathogens” occurred.

The carefully worded press release by the Kazakh ministry clarifies: “This is not true. The facility is being protected.” Period.

The intriguing report highlights the tip of an iceberg which has implications for public health and holds serious geopolitical ramifications.

Since the late 1990s, when it came to be known that the U.S. was steadily establishing and building up partnerships in biological research with several ex-Soviet republics, Moscow has repeatedly alleged that such cooperation posed a threat to Russia.

These biological research facilities were originally envisaged as part of the so-called Nunn-Lugar Biological Threat Reduction Program to prevent the proliferation of expertise, materials, equipment and technologies that could contribute to the development of biological weapons.

But Moscow suspected that the exact opposite was happening—in reality, Pentagon has been sponsoring, lavishly financing and providing technical assistance to these laboratories where “under the guise of peaceful research, the U.S. is building up its “military-biological potential.”

In a sensational statement in October 2018, Major General Igor Kirillov, the commander of Russia’s Radiological, Chemical and Biological Defense Troops went to the extent of disclosing a discernible pattern of the network of Pentagon labs being located near the borders of Russia and China.

The U.S.-funded research projects centred on studies involving select agents including zoonoses: anthrax, plague, tularemia, highly pathogenic avian influenza, brucellosis, etc. These projects funded researchers in Kazakhstan, while project collaborators in the U.S. and UK mentored and guided these researchers to develop and test their hypotheses.

It has been a “win-win” arrangement. The Kazakh institute staff got trained in modern diagnostic and data management techniques, and did research work with lavish external funding, while the Pentagon obtained through such labs valuable inputs for U.S. covert biological weapon programs with military application specifically directed against ethnic groups in Russia and China.

The unassumingly-named Central Reference Laboratory (CRL) in Almaty figuring in the Tass report was originally planned in 2013 with the U.S. investing $102 million in a biosecurity lab to study some of the most deadly pathogens that could potentially be used in bioterrorism attacks.

Rather than locating the new facility in some obsecure tract of land in Nevada, the Pentagon deliberately chose a site near Almaty to securely store and study the highest-risk diseases such as plague, anthrax and cholera.

The rationale was that the lab would provide gainful employment to talented Kazakh researchers and get them off the streets, so to speak—that is, discourage them from selling their scientific expertise and services to terrorist groups who may have use for biological weapons!

But the CRL, now operational, is anchored on institutional cooperation between Kazakh government and the U.S. Defense Threat Reduction Agency under the the Pentagon, which is tasked with protecting “U.S. National Security interests in a rapidly evolving, globalised threat environment to enable a greater understanding of our adversaries and provide solutions to WMD threats in an era of Great Power Competition.”

By the way, Germany also has a similar arrangement under the rubric German-Kazakh Network for Biosafety and Biosecurity, which is co-managed by the Bundeswehr Institute of Microbiology (a military research facility of the German Armed Forces for Medical Biological Defence.)

Is China indifferent to all this? Far from it. Beijing Review featured a report sourced from BBC Monitoring in 2020 conveying China’s concerns in the matter. As recently as in November last year, a Russian commentator wrote that these bio-labs are virtual Pentagon bases and demanded an international  inquiry. He highlighted that the Kazakh ministry of education and science “now works mainly on Pentagon research programmes.”

How could Kazakhstan, a CSTO member country, have got away with such conduct? This needs some explaining.

Paradoxically, these biological labs are living examples of something sinister that has been going on which everyone knew and no one wanted to talk about—namely, the extensive penetration of the decadent Kazakh ruling elites by the U.S. intelligence.

This penetration has been going on for years but significantly deepened as the 81-year old former president Nurusultan Nazarbayev’s “hands-on” leadership began to loosen and his family members and cronies increasingly began moonlighting (under the patriarch’s benevolent gaze, of course)—something akin to Yeltsin years in Russia.

Sadly, it is a familiar story. The Kazakh elites are notoriously corrupt even by Central Asian standards and the parasitic elites have preferred to keep their loot in safe havens in the western world. Unsurprisingly, they are hopelessly compromised to the U.S. intelligence. It’s as simple as that.

Most certainly, Moscow sensed that popular disaffection was building up and the ground beneath the feet of Nazarbayev, a close friend of Putin, was shifting. But it did not—or more likely, would not—interfere since the U.S. was operating through powerful comprador elements who happened to be the aging patriarch’s family members and associates.

Given the clan affiliations in that part of the world, Moscow probably felt it prudent to keep its counsel to itself. An added factor would have been the fear that the U.S. might manipulate the ultra-nationalist forces (as happened in Ukraine) to inflict harm on the vulnerable 3.5 million ethnic Russian minority (18% of the population.)

Above all, the fact of the matter is that Nazarbayev cronies held the levers of state power, especially over security apparatus, which gave Washington a decisive edge.

But things have dramatically changed this past week. Nazarbayev may still have some residual influence but not good enough to rescue the elite who subserved U.S. interests. President Tokayev, a low-profile career diplomat by profession, is finally coming on his own.

Two of Tokayev’s decisive moves have been the replacement of Nazarbayev as the head of the National Security Council and the dismissal of the country’s powerful intelligence chief Karim Masimov (who has since been arrested along with other unidentified suspects as part of a probe into “high treason.”)

Indeed, Washington has much to worry about because, at the end of the day, Kazakhstan remains an unfinished business unless and until a colour revolution can bring about regime change and instal a pro-West ruler in power, as in Ukraine. The current turbulence signified an abortive attempt at colour revolution, which boomeranged.

Unlike in Afghanistan, CIA and Pentagon are not in a position to “evacuate” their collaborators. And the torrential flow of events has shocked the Washington establishment. Kazakhstan is a large country (two-thirds the size of India) and sparsely populated (18 million), and the CSTO forces who moved in are well-equipped and led by a tough seasoned general who crushed the  U.S.-backed insurgency in Chechnya.

The mandate for Russian forces is to protect “strategic assets”. Presumably, such assets include the Pentagon-funded labs in Kazakhstan.